No one likes to be "unliked" on Facebook or elsewhere. But, every year for the last 12, I put on a brave face and go where I must -- not where I like -- where the world's most powerful people are: Davos, the World Economic Forum (WEF). Every year, I get a few "WEF WTF" emails and now tweets and comments.

The week of the WEF feels like the most challenging week of my working life because of the "WEF spirit" conveyed by people at the Forum walking around as if they owned the world. The truly frustrating thing is that they actually do own most of it.

Frankly, I'd rather be risking arrest and taking part in an act of peaceful civil disobedience, marching in solidarity for social and economic justice or attempting to build strong civil society alliances together with like-minded people. I would rather be in the company of people who understand that humanity can be so much better than what we have been and what we are: tolerating of dehumanizing poverty, sacrificing our children's very futures by failing to act on climate change when both the science and mother nature itself are speaking with deafening urgency, paying lip service to gender inequality, spending immoral amounts of money on military spending when our public services are straining in rich and poor countries; and the list of injustices is much longer of course.

Yet, here I am again seeking to appeal to the most powerful that they have to move beyond an obsession with preserving a system that drives economic inequality, environmental destruction and violence. What is needed is not system maintenance or system recovery but a substantial system redesign. Indeed, a small but growing number of CEOs are beginning to "get it"; however, the majority of CEOs must unshackle themselves from a business-as-usual mentality since the levels of popular disaffection we are seeing from the Arab world to the Occupy movement, will look like a Sunday morning picnic in years to come if business leaders do not recognize that time is fast running out.

But, if we are going to make it through the unelected, unrepresentative, super-powerful people prowling the corridors of Davos, we will need to be inside. Leaders will need to go beyond "resilient dynamism," protecting themselves from future shocks, and invest their power and money in long-term solutions. Like it or not, we have to win over at least some of the powerful in Davos if we are to avoid climate catastrophe, create decent work, and ensure decent public services, if we are going to have a chance to avert unnecessary conflict and disaster.

This year, I want to take your message to the #WEF @Davos -- please, be specific and to the point through your comments below, your tweets and posts. As the Davos conference unfolds and you follow it, I'd love to hear your thoughts and I will do my best to speak your truth to power. 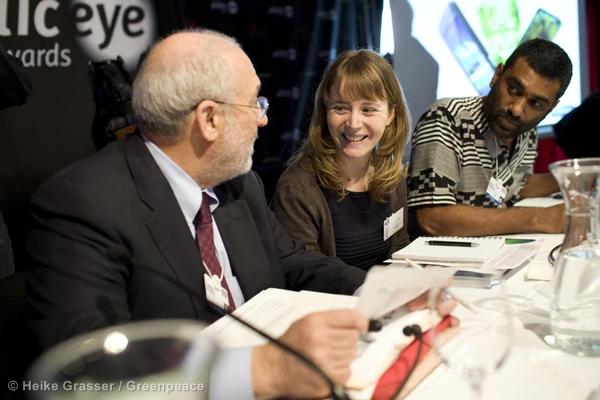 If business took the view of enlightened self-interest, they would act against climate change because it's in their interest, because they could remain viable entities: bearing in mind what Sharan Burrows, the head of the International Trade Union Confederation has said: "There are no jobs on a dead planet" -- and indeed there is no business on a dead planet either. A transition toward an energy sector based on renewables will generate new opportunities, new industries, new forms of business and this would benefit both business and society generally.

As I try to find my thermal long johns to pack for the trip, I take heart in recent speeches from two of the most powerful people on the planet -- two indications that the truth is percolating through to power. Enlightened self-interest and philanthropy were writ large in Barack Obama's inauguration speech, a speech which he rekindled my faith in the fierce audacity of hope:

"We, the people, still believe that our obligations as Americans are not just to ourselves, but to all posterity. We will respond to the threat of climate change, knowing that the failure to do so would betray our children and future generations. Some may still deny the overwhelming judgment of science, but none can avoid the devastating impact of raging fires, and crippling drought, and more powerful storms. The path toward sustainable energy sources will be long and sometimes difficult. But America cannot resist this transition; we must lead it. We cannot cede to other nations the technology that will power new jobs and new industries - we must claim its promise. That is how we will maintain our economic vitality and our national treasure - our forests and waterways; our croplands and snowcapped peaks. That is how we will preserve our planet, commanded to our care by God. That's what will lend meaning to the creed our fathers once declared."

The UN General Secretary addressing a conference in California earlier this month, who joined some of the dots: "The world spends more on the military in one month than it does on development all year." Continuing, " ... four hours of military spending is equal to the total budgets of all international disarmament and non-proliferation organizations combined. The world is over-armed. Peace is under-funded. Bloated military budgets promote proliferation, derail arms control, doom disarmament and detract from social and economic development."

So that is President Barack Obama and UN Secretary General Ban Ki Moon covered -- what do you think?