By Anna Lee Beyer
This post originally appeared on xoJane.

It is 8 am on a Monday. This morning holds all the potential of the week ahead -- potential to have a perfect training week, to coast on the good mood that always comes from a good run. Potential to beat my speed and distance expectations.

I have a training plan taped to the pantry door so I can casually gesture to it when I brag to my husband. Did you see my pace today? He rolls his eyes because, of course, he already got an alert from MapMyRun with all my stats and a sweaty selfie.

Monday means a blank week ahead, where I can scribble my accomplishments, share triumphs.

I am a runner.

I started running a year ago to achieve a lifelong goal and to pull myself out of a postpartum funk. I didn't just want to run, I wanted to be a runner. The first few months were heavy with self-doubt. Just read what I wrote about it for xoJane in December. (Cliff Notes version: Who do I think I am, being this fat and trying to run?) 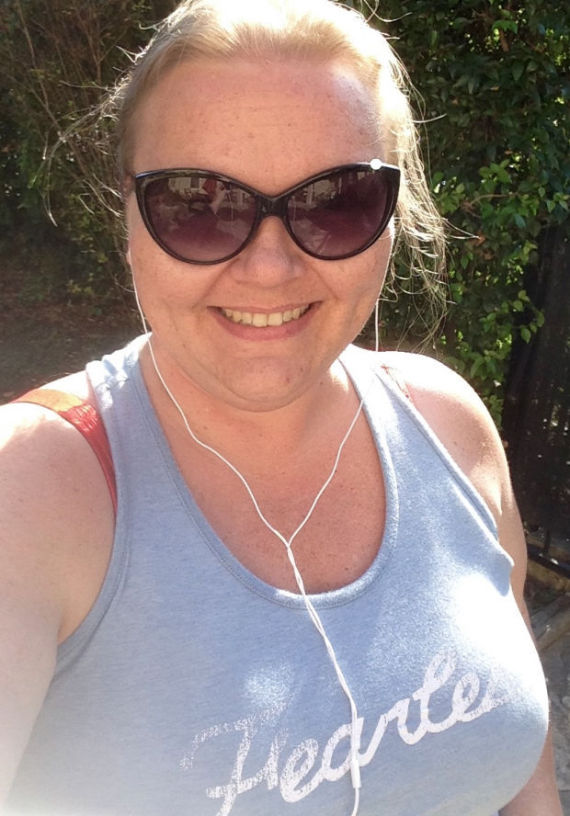 Now I don't care what anyone thinks when I go out running.

What has changed after a year of running three times a week?

Let's just get this out of the way: My weight has not changed at all. There's probably an internet's worth of trolls ready to tell me I must be doing it wrong, but I'm just like *shrug*.

To me, it's so much more satisfying to examine what has changed in the last year as a result of running. Like my early stumbling blocks, the greatest changes have been all in my head.

First off, it feels so good to look at how far and fast I can run today, compared to one year ago. A year ago I ran for one brutal minute before I needed a full four minutes to recover. After two or three rounds like that, I felt like I had put in max effort and went home limping and huffing.

Today, I run and run, pay less attention to the time, take walk breaks for steep hills or to pick up a tossed sippy cup. (I still execute the majority of my runs while pushing a 28-pound toddler in a 25-pound stroller. This makes me a badass.)

Some days there are longer walk breaks with less invincibility to fuel me. Months ago I complained to my husband (a runner since high school) about how unsatisfying a run had been. I was slow, heavy, achey, grumpy. He told me it might feel crappy all week, but eventually it would feel great again. Now I've learned to accept the tough days and keep moving. At one time, my motivation was so fragile and sensitive!

Last year, I wrote, "Each day is a battle with my own mind's powerful attempts to keep me stationary and hidden inside the house." That attitude has totally flipped; it now takes a very powerful force to pull me off my training plan. This summer, I ran through oppressive south Texas temperatures. In the last few months I have had weekly migraines, but I keep making up workouts.

Now a quick 30-minute run is not enough. I start to feel best after 45 minutes or an hour. My idea of cross-training is walking because my motto is "Miles, Miles, Miles" -- somewhat to my own detriment.

A doctor suggested I add strength training because building muscle improves insulin sensitivity. I am as obsessed with vanquishing diabetes as I am with becoming an athlete, so I had good intentions. Still, when I get an opportunity to work out, all I hear is "Miles, Miles, Miles."

Plenty of people are into exercise -- that's not so special. It still feels strange to me, though, because for so long I didn't think I belonged in that world. Even through the years when I wasn't running, I subscribed to running magazines, built my aspirations on stories of "real" runners. This year I started to notice that real runners are a lot more like me than I knew.

It began with a kind comment on that December article, pointing me to a Facebook community of running women called The Fat Girl's Guide to Running -- "The world's first virtual running club for plus size women." Founder Julie Creffield started running ten years ago and now inspires thousands of women to keep going and claim the title "athlete." I appreciate that her merchandise, books, and blog posts don't exclude me based on size or speed.

Then this summer, Women's Running magazine caused a bit of a sensation when it featured plus-sized runner Erica Shenk on its August cover. I bought a copy as soon as I could find it because from my perspective, it was a watershed moment. A fitness magazine with someone like me on the cover, an article titled "3 Reasons Your Weight Doesn't Matter," and a feature on gear that is actually made in my size. It was the magazine equivalent of being able to walk into a store and try on clothes instead of just daydreaming about being included. 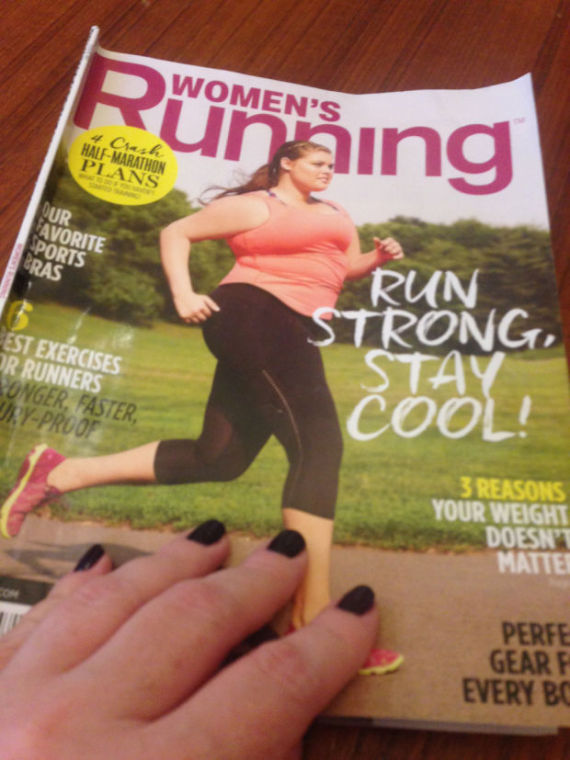 My own well-loved copy.

Around the same time, I learned about Mirna Valerio when she was profiled by Runner's World. I wanted to think I was like her -- same age, same size, a blogger. I wanted to think I could become more like her -- a better, faster runner. She is not just a runner (which is awesome enough), but an ultra runner, a shocking feat for any (type of) body. She takes a selfie on every run, to claim her place in that experience.

Media attention for women like Mirna, Julie, and Erica indicates a subtle shift from the old narrative of running to get skinny to running while fat and enjoying it. I didn't want to pretend I was invisible on runs anymore; I wanted to be there, no matter who saw me.

In a year of running, I have noticed exactly one strange look from a bystander. I know some runners get heckled and harassed, but I must keep my headphones loud enough to miss all that.

A year ago, I went out for runs in whatever raggedy old stretchy thing would provide the best camouflage. Now I gear up in clothes that work for me because this is a passion I've proven my commitment to. My arms are bare and my running tights are tight.

Today I am 12 weeks into a half-marathon training program. The race is in December, and I know I can complete it. In fact, now I'm pretty sure I can do many of the things I've long daydreamed about -- hiking, paddle boarding, cycling.

But I'm not just daydreaming about these activities, I'm planning for them.

More from xoJane:
I Ran Into My Boyfriend On A Date And He Acted Like He Didn't Know Me
My Friend's Daughter Was Denied Entry To Her School Dance After Being Subjected To A Mandatory Dress Inspection
I Have Extra Skin After Losing 180 Pounds, And Even When My Ex-Boyfriend Criticizes My Body On Reddit, I Refuse To Be Sorry