How I Gained It: I basically survived on fast food during my college years. I was active so I was able to keep my weight at bay. As I got older I continued to live off of fast food but I was less active. At first I gained only a few pounds. Once I started working at my current job in 1998 (where I sit at a desk for the vast majority of the day), I began to put on weight like there was no tomorrow. Fast food was cheap, I disliked vegetables and fruits and I developed a 2-liter-per-day diet soda habit. I continued to gain weight, progressing from 225 to 308 pounds in 2004 when I was diagnosed with diabetes. I continued to gain weight for the next six years, pushing the scales to my highest weight of 344 pounds in 2009.

Breaking Point: My wife had always supported me, but in late 2009 she confessed that she was scared that I was on the road to an early death. She suggested that I speak with our doctor and inquire about the possibility of bariatric surgery. I, too, was concerned with my health and decided that even though I had never made a concerted effort to lose weight, I was willing to take this drastic step. My real "Aha!" moment was during a mandatory health education class for bariatric surgery candidates. I had an assignment to calculate the number of calories for a "regular" meal. What I estimated to be a meal of 700 calories was actually a meal consisting of 1,880 calories! I could no longer hide my head in the sand. I had to take responsibility for what I had done to myself!

How I Lost It: I decided that I would put into play the information I was learning at these mandatory health education classes. I vowed to walk for 30 minutes per day. I would eat at least 40 servings of vegetables and fruit a week. I would drink at least 64 ounces of water daily. And, in what is probably the most important decision I have ever made, I began tracking my food intake on SparkPeople.com. I gave up diet soda and vowed to minimize my trips to the local fast food establishments.

I was initially amazed by the weight I was losing. I lost 14 pounds the first month, 11 pounds the next month and then 17 pounds the following month. My clothes were fitting more loosely and I had more energy! By the end of the six-month class I had lost more than 75 pounds and, after consultation with my wife, decided that I had the tools to continue with this weight loss journey without bariatric surgery. By the end of the first year, I had lost more than 125 pounds! Along the way, I increased my daily exercise to one hour and began light jogging! I still track every piece of food that enters my mouth, and I also track my daily cardio and strength-training activities.

Two-and-a-half years later, I have lost a total of 152 pounds. I am currently working on reaching a weight of 180 pounds, but I am concentrating on building up my muscles and decreasing the amount of loose skin around my belly area. While I don't have six-pack abs yet, the excess skin is slowly melting away. In a nutshell, I think I have been very successful in this endeavor because I have never approached it as a diet, but as a lifestyle change. I thank SparkPeople for this mindset, and for all of its helpful tools, information and support that I have taken advantage of. I am living proof that change is possible. Life is awesome! 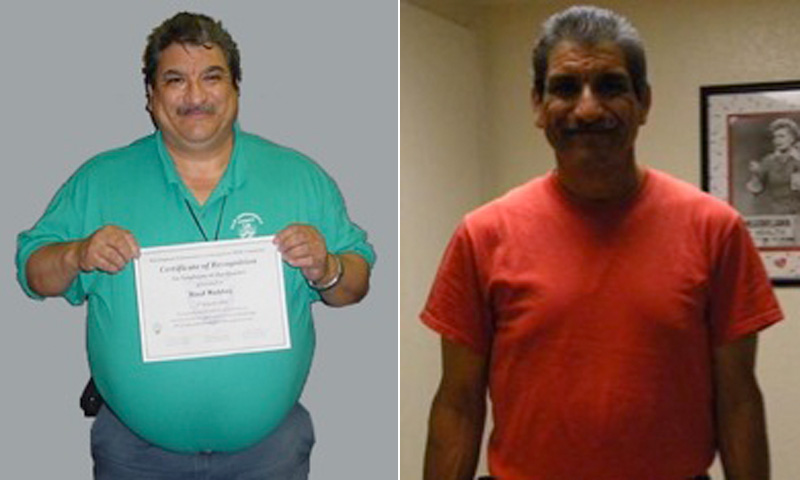