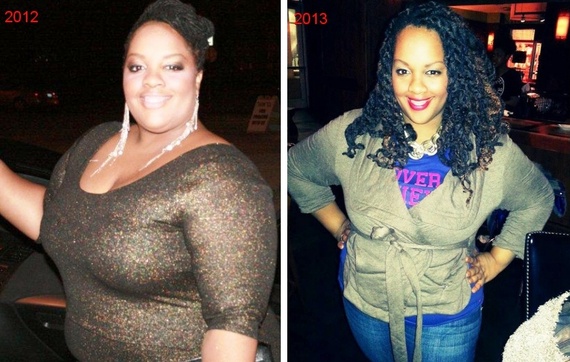 "What would you do if I lost weight?"

My best friend and I were in the throes of the same tired conversation we had every New Year's Day: Are we more than friends? It never ended with any resolution.

He did not hesitate. "I would ask you to marry me."

Just like that, we had a resolution. Never mind that I was wrist deep in a Doritos bag. He finally acknowledged my fat. Now we were getting somewhere.

It hurt. But, I was not surprised. By the end of 2012 I was well over 300 pounds and growing every day. I was gaining 2 pounds a month. I didn't come off as someone capable of giving or receiving a lifetime of love and care. I didn't even take care of myself.

I ate, but I did not move. Sweat was my mortal enemy. My major food groups were drive-thru windows, Harold's Chicken Shack, and restaurants that served things smothered in cream or cheese. I was a ticking time bomb.

I had no discretion when it came to relationships. I could not get past my size. I thought the attention I received from men should be treasured since I was so overweight. My friend warned me to be selective. He tried to remind me men would flock to my beauty even if I had an arm for a nose. But his messages of discernment were dead on arrival. I was too easily offended and craved the validation he would not give. I dismissed the grief I heard in his voice when I had to tell him about an emotional abuse I suffered at the hands of men that had no business handling me at all.

For 17 years, he watched me grow up and out. I changed from a confident and curvy girl with lots of energy to an anxious and obese woman that spent her evenings on the couch with something fried, sweet, or both. He waited patiently for a glimpse of the self-assured girl he used to know. I presented an uncontrolled woman with no plan. He decided we both deserved more. I guess he figured it was high time to tell me.

I knew I deserved more. I wanted to take care of myself. I wanted to be healthier and lighter. However, I did not want to lose weight. Losing weight entailed a workload I was afraid of. I deemed it impossible. So instead of accepting his help, I yelled at him and told him he did not love me. Love would not notice the 300 pounds my 5'3" frame carried. Confused, he just stared at me; he knew more than anyone how desperately I wanted and needed to lose weight. He alone knew all my secrets. He heard my disappointments. He hoped for my future. He refused to believe it could not be done.

"You can accomplish anything you want to. You always have." That was his favorite refrain. I wasn't interested in what I could do. So I got angry.

I spent a lot of wasted time working around his request that I love myself enough to become my best self. I dated men who accepted my size; they weren't for me. I traveled all around the world; it was exhilarating but empty. I even attempted to get weight loss surgery; I chickened out at the last minute. I was running away from my problem without breaking a sweat.

The running brought me 20 more pounds and back to him, on New Year's Day 2013, with more baggage than I left with. He was still my best friend. I was ready to change. Thank God he was ready to support. His workout playlists of Rick Ross and Michael Jackson make my 3-mile runs bearable. His rebukes of my scale obsession put healthy habits in perspective. Plus, every time time he shows solidarity by happily eating fat-free versions of his favorite foods, I love him a little bit more.

Starting my weight loss journey with him made me realize without a shadow of a doubt that he does not love me for what I look like. If he did, he would have kept silent, and married someone else. Instead, he invested in my personal success. He helped me realize that I am not my weight.

I too could have married someone else, and told him to jerk off. I could have hidden out behind my weight a little longer. Most men I dated believed my weight was a part of me because that was the narrative I sold them. I would say with pride, "I'm a big girl." However, I could not fool a man that has loved me for more than half of my life. I started my journey because I knew I could not afford to miss an opportunity to truly show love and be loved authentically. No piece of sweet potato pie is worth that.

I used to worry I was doing this for him; I knew that was not sustainable. Now I know that I'm doing all of this for me. He was the catalyst, but I am the reason. I want to keep the best possible Akela around. However, I must admit there's nothing sexier than getting your body in shape while your man happily cheers you on.

More:
self-lovehealthy livingwomens issueshow to lose weightself confidence
Newsletter Sign Up
The Morning Email
Wake up to the day's most important news.
Successfully Subscribed!
Realness delivered to your inbox