A nation mourns as "Weiner" jokes died today, Thurs. June 16, at 2:22 p.m. Congressman Anthony Weiner's resignation from office also marks the end of a storied era; a media scandal fueled by the fact that we were all allowed to say "weiner" in public a lot over the last few weeks.

The jokes were nothing particularly new. They had been made at the expense of the former Congressman's surname since he took office, making the jokes 12 years old, both in age and sophistication. However, the puns and gags over the name "Weiner" reached full maturity over the last few weeks. Those who made Weiner jokes in the past should be so lucky.

Now that Weiner has resigned his seat in Congress, he will heretofore be referred to as "Mr. Weiner," which shouldn't be funny, but is kind of funny.

But Weiner jokes had an even deeper past than most knew. It has been reported they began when Weiner was a schoolboy. Mr. Weiner's life allegedly made a turn for the worse the moment a six-year-old Brooklyn boy uttered the phrase "Anthony's Weiner," much to the delight of the schoolyard and to the chagrin of the future congressman. Little did that boy know that a nation would follow his lead forty years later.

Anthony Weiner was even known to make Weiner jokes at his own expense. In fact, maybe this whole sexting business was an elaborate high-concept joke about his last name. We may never know.

However, in a twist of ironic fate, Weiner was brought down by tweeting his wiener, which we sincerely hope is a sentence that someday appears in history textbooks.

While the cause of death is officially "exhaustion," complications from tabloids headlines, such as "Weiner's Pickle," "Obama Beats Weiner," "Weiner's Hard Time," "Hide the Weiner," "Weiner: I'll Stick it Out," and "Weiner Bawls," are also to blame. Jay Leno, David Letterman, George Lopez, Conan O'Brien, Jon Stewart, Stephen Colbert, Jimmy Kimmel, Jimmy Fallon, Craig Ferguson, about a million morning zoo DJs, as well as this very website, are listed as suspects and conspirators. 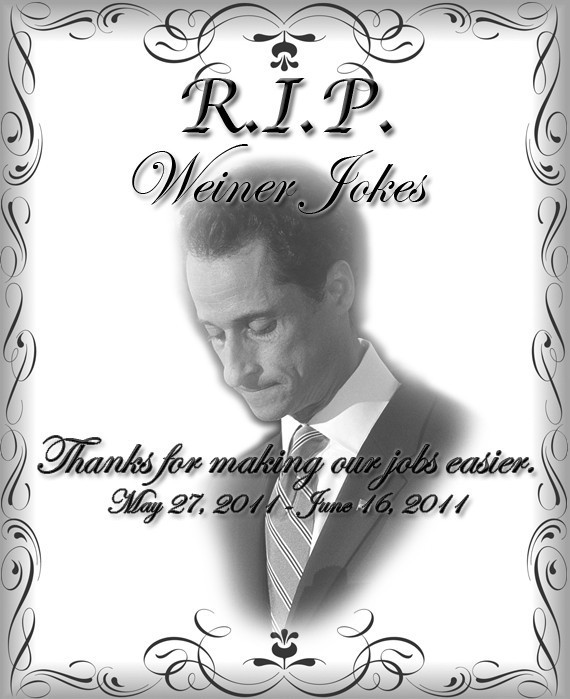