For the next issue of MAD Magazine, the usual gang of idiots had dubbed "Weird Al" Yankovic as their first ever guest editor, though they call the post "Idiot in Chief." It's a position that's long been held by John Ficarra who might now be sweating for his job. 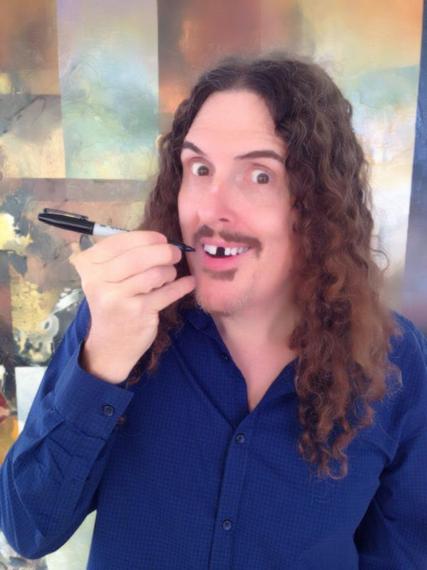 The issue comes out April 21st and, to commemorate the occasion, "Weird Al" and John Ficarra were foolish enough to agree to talk to me.

Bryan Young: I guess we should just get right into it, how did this merging of parody come to be?

Weird Al: Well I've made no secret of my life long love of MAD Magazine, it's probably my first and greatest influence in terms of my comic sensibilities. I've known John [Ficarra] for many years, and we've been friends. About four or five months ago, at a dinner in New York, John made the very nice offer of my being guest editor for an issue of MAD and I thought about it for about half a nanosecond and decided that was a pretty good idea.

BY: John, were you worried that once you had him you wouldn't be able to get rid of him?

I think he wants my job, but that's okay cause I'm going on world tour next month.

JF: "Mandatory MAD" we're calling it, and we're out there. We wanted to make sure we had a good fit for who would be our first guest editor. And I think there was no question that it'd be Al cause we knew him, we knew his comedic senses, and we knew his body of work, and what a high standard it had to it, and how it sort of aligns with MAD sensibilities. We were delighted the second he said yes. I came back to the office that next morning and told the staff and they were over the moon with it. Then it was just, "We could do this, and we could do that," then Al came with ideas. So it really took off very quickly, and has been very smooth.

BY: Al, how did this work on your part? I'm sure your schedule is already pretty busy, I mean you just got done shooting all kinds of music videos for everything and about to go on world tour, how were you able to fit this in?

Al: It fit pretty nicely into my schedule because we'd pretty much finished the bulk of promotion for Mandatory Fun and were just getting geared up for the World Tour so this was a nice time for me to be working on it. And having said that, also, John and the rest of the staff did most of the heavy lifting and I was able to be more of a glorified contributor. I was able to come up with a couple articles for the magazine, I was able to solicit help from a bunch of my friends to contribute pieces: Patton Oswalt, Seth Green, Emo Phillips, Chris Hardwick, John Hodgman, and more. It's very much a "Weird Al" themed issue, so I'd like to think that there's a lot of "Weird Al" flavor throughout but I think it'd be generous really to call me an editor.

BY: What's it like looking at an issue where the needle moves closer to "Weird Al?"

JF: Well it could certainly move our bar up cause we had no place to go but up. But it was very interesting watching Al's work process. Originally he had two ideas for articles, one was gonna be songs he didn't do, then there was a second idea and as he started writing the one he went, "This is gonna combine into two." He just perfectly saw where it should go and the minute I read it, I said he was absolutely right. The piece came out great, it's a six pager...

JF: Yes, it had some great art with it, so its a fun read. We open the book with it.

BY: Al, obviously MAD has been such a seminal influence on you over your career, what stories in MAD can you point to as being the most important?

Al: It's hard to say, I picked one of my favorite articles for the MAD vault. Which is one of the features of the Magazine so they don't have to actually pay artists or writers to come up with new stuff.

Al: So I picked one of my favorite articles form the mid 60s called "MAD is a Kitty TV Show." It's hard to say exactly what it was about MAD Magazine that inspired and influenced me, but i think it was a certain amount of irreverence, standing up to authority figures, that made a big impression on me as a preteen. That whole comic sensibility of MAD was something I hadn't been exposed to up until that point. When I was, it really kinda flipped a switch in my brain.

JF: Do you remember a favorite song parody, Al?

Al: Not any specific one, but I was a huge fan of Frank Jacobs, I guess he wrote the plurality of the song parodies for MAD, Sam Hart, a few others, but that was also where I was first exposed to the art form of song parodies.

B: Where do you both see MAD's relevance today, and how's it going to match how it's been? For both of you?

J: MAD is the last man standing in terms of print humor, but that's certainly not the only place where you can find MAD. We have a daily blog, we have a very robust book division and there are a couple other projects coming out that I really can't go into terribly now because corporate would kill me that I think you're gonna see MAD exploding in ways you might not expect.

Al: I personally think the "Weird Al" issue ushers in the golden era of MAD.

BY: I could not possibly argue with that.

JF: Many readers will, though, trust me. 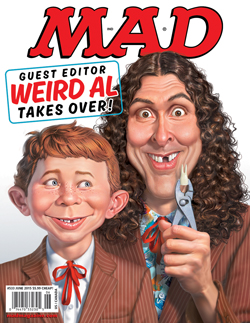 BY: Al, I'm told you'd be answering mail on behalf of MAD for this issue and I'm wondering what that experience was like. I mean do you normally answer fan mail like that? And was this more abusive because it was from a MAD audience?

Al: I think I'm equally as abusive as the editors normally are for the "Letters and Tomatoes" column, which is the fan mail part of MAD Magazine and an ongoing feature. I'm no stranger to answering fan mail myself, I used to do a segment on "Al TV" for my MTV specials where I'd do Al's Mailbag so it was not unusual to answer stupid questions like that. We'd get questions like, "If you were forced to crazy glue one of your nostrils shut, would it be the left one or the right one?" Or, "When it comes to toilet paper are you a folder or a cruncher," so it was deep profound questions like that I had to come up with answers for.

BY: Which is exactly what you'd expect, I suppose.

JF: The weird thing was that when solicited the letters, we put it out that al would be answering the letters and overnight we got 5600 letters, all from the same guy. Al says he has a lot of fans, but I don't know...

BY: Do you see more of these guest spots in the future? Or are you just gonna give me the press answer and say, "Of course we'd love to do it again," regardless?

Al: I'm the first guest editor for MAD in 63 years so I think this is gonna establish a one time every 63 years tradition. And I'm hoping the next editor will be me as well.

JF: On the other hand, if it doubles our sales, Al will be back before the end of the year, I promise you.