America's national pastime may be steeped in traditions like the Seventh Inning Stretch and ceremonial first pitches, but when it comes to food, Major League Baseball parks are cooking up grub that goes way beyond peanuts and popcorn.

The Arizona Diamondbacks capitalized on the changing tastes of baseball fans -- or at least the American ingenuity that can pack five great snack foods into a single meal -- when it debuted the new D-Bat Dog, an 18-inch toppings-stuffed corn dog served with a side of fries for $25 (see below).

"[The D-Bat Dog] is really about providing our fans with new options each year and in the case of some of our larger items, it's really about sharing with the family," Diamondbacks President and CEO Derrick Hall told HuffPost through a spokesperson.

Hall told the gossip site TMZ the team came up with the idea for the D-Bat because "We had some complaints we were being too healthy. This is to appease those people."

Fans reportedly snapped up 300 D-Bat Dogs on opening day. But Arizona is hardly the only team catering to fans' hearty appetites. From epic interpretations of the traditional ballpark frank to 12-scoop sundaes, here are some of the most unreal items you can dig into next time you head out to the old ball game. 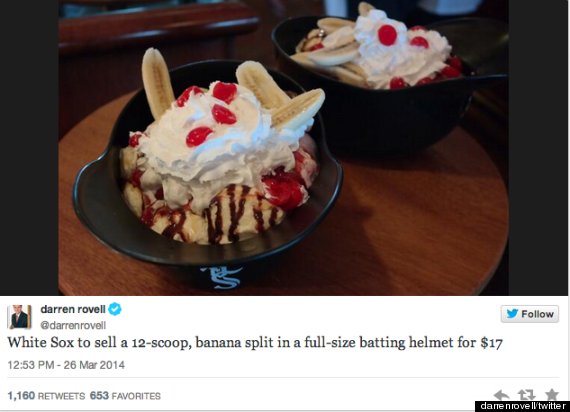 Take 12 scoops of vanilla, chocolate and strawberry ice cream, drizzle them with caramel, strawberry sauce and chocolate syrup, toss in some bananas and the typical sundae toppings and you have the White Sox's latest ballpark treat that's

The Walk Off isn’t just for the end of the game, get yours anytime at Dempsey’s! pic.twitter.com/adSFyWq2Y1

Introduced in 2013, the Orioles' appetizer that eats like a meal is probably the only ballpark food that you, as the Washington Post notes, "need a weapon to cut." 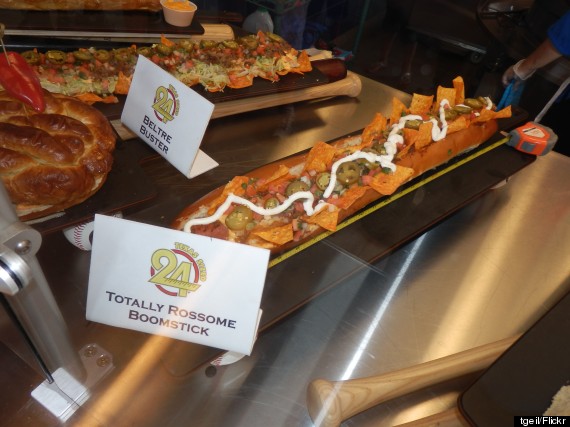 Take the Broomstick, a "tremendous-larger-than-life" hot dog measuring two feet and weighing in at one pound of beef and up the ante by topping it like nachos with smoked brisket, pico, sour cream, and Doritos to make it "Totally Rossome." 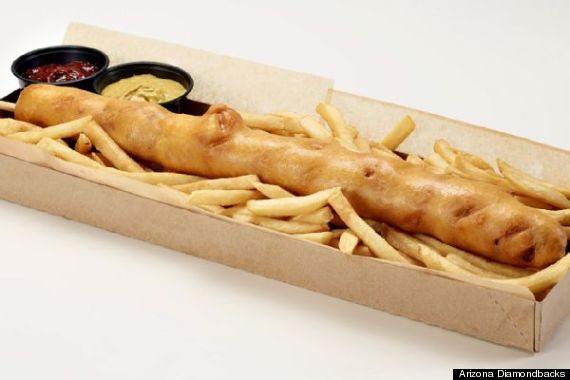 The Diamondbacks' home run meal for 2014 is the aforementioned 18-inch corn dog stuffed with cheese, jalapenos and bacon. Just to be sure you get your money's worth, it also comes with a side of fries.

About to try the #Tigers new poutine hot dog and new egg/bacon/cheese dog. Details about memorial services to come. pic.twitter.com/ri77EZD8UE

Though the latest Comerica Park creation helps gnoshers skip the pesky step of eating a bite of frank and then some fries and gravy, the $7 poutine hot dog looks downright restrained compared to other items on the list. Behold its simplicity: Take a serving of poutine -- fries, gravy and cheese curds -- and cram them into the bun with a hot dog. 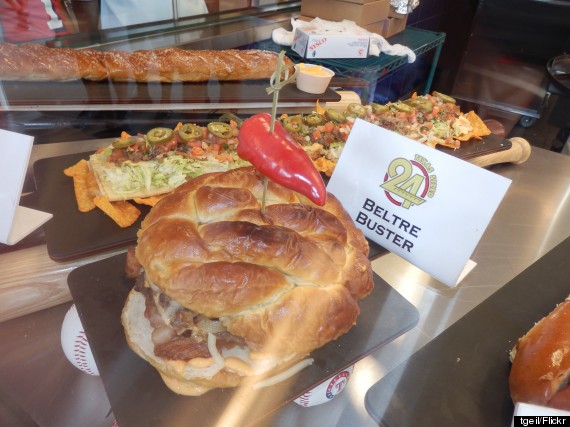 It shouldn't be much of a surprise that Texas goes all-out when it comes to the meaty Beltre Buster burger. A pound of beef is the supporting structure for a half pound of bacon, onions, cheese, and chips on a pretzel bun.

Finish our 4-pound Fan vs. Food Burger & a pound of fries, get 2 tickets to a future #Rays game & a shirt. #LiteLunch pic.twitter.com/THhgk90gn2

A four-pound burger? Ah, but if you finish it, you and a buddy score free tickets to another game (and another chance to attempt this glorious meat pile).

If there's anything that can make a four-pound burger look dinky ... it's an eight-pound burger. The cardiac surprise known as the StrasBurger is indeed a whopper -- but it's meant to feed eight people. 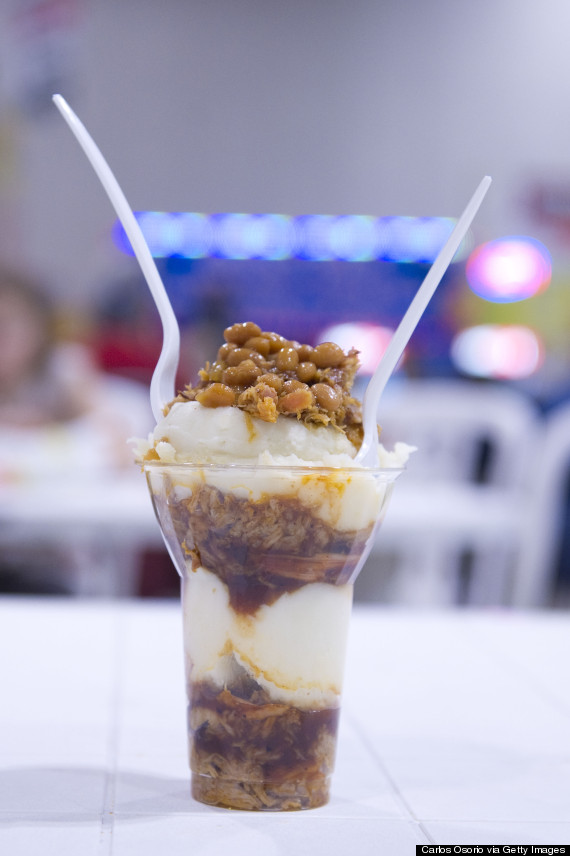 The Brewers pulled pork parfait (porkfait?) is perhaps the most Wisconsin thing to ever happen at Miller Park. The parfait takes on a deceptively dessert-like form, but instead of chocolate sauce and whipped cream you have pork gravy and mashed potatoes. The PPP is, however, the only ball parkfood on the list with its own Twitter account.

We're not sure whether to laugh or cry. If you've swapped brunch for a ballgame, at least you can drink your meal -- with an entire bacon cheeseburger attached.

Why choose one cheese for your sandwich? The Closer doesn't press you for such choices, and instead gives you nine cheeses all at once. Lest you think it's totally unhealthy, there is apple compote.