You likely take the various colors around you for granted, assuming there's nothing special about the blue of your jeans or anything potentially disgusting about the browns of that painting you bought at an antique store. But many colors are derived from odd sources.

For instance, rulers of France and much of Europe had to be wary, for not knowing about certain colors was potentially deadly. Green wallpaper can be much more dangerous than you thought.

Much of the research behind these eight bizarre facts is extensively based on journalist Victoria Finlay's amazing 2014 book The Brilliant History of Color in Art.

Smithsonian dates the end of "mummy brown" as late as 1964, when the "manufacturer" ran out of mummies to grind into paint. Painters had been using mummy brown for centuries, collecting the bizarre substance, likely at first from an apothecary, that would sell for medicinal purposes.

Victoria Finlay explains in The Brilliant History of Color in Art how this came about:

Actually, mummy was first used as a medicinal substance as early as 1300, which is even more bizarre. Virtually all the pigments that were known to painters from the Middle Ages to the Renaissance were also medicines, including lead white, minium, vermilion, chalk, orpiment, sepia, ultramarine ... and mummy. These medicines were supplied by apothecaries, who were the main sources of supplies for painters. No doubt an artist somewhere saw mummy in his local apothecary shop and thought, "I wonder if this would make a good bit of paint?"

Eventually in 1712, an artist supply shop was opened in Paris called À la Momie or "To the Mummy." The color really took off and later in the century and according to Finlay it was said that the finest brown used by the current president of the Royal Academy of Arts was "the flesh of mummy, the most fleshy are the best parts."

If you're curious what ground up mummies looks like as art, the above painting, "Interior of a Kitchen," owned by The Louvre and painted by Martin Drölling in 1815 apparently uses "mummy brown" extensively.

As mentioned before, you probably couldn't find mummy brown to paint with these days. An article in Time from 1964 quoted Geoffrey Roberson-Park, the managing director of a respected London color maker, as saying, "We might have a few odd limbs lying around somewhere, but not enough to make any more paint." 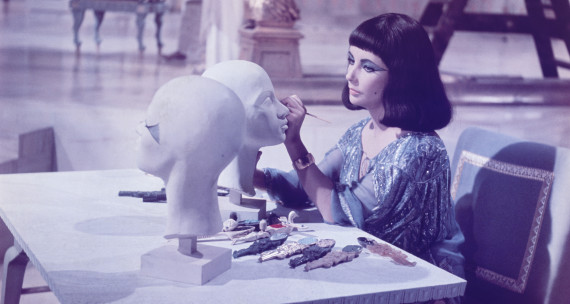 Finlay writes in The Brilliant History of Color in Art that Queen Cleopatra was obsessed with this color and had everything from sails to sofas dyed in the pigment. When Julius Caesar visited in 48 B.C., he became hooked as well and made it a color of royalty for Rome.

Although the color came to mean extreme wealth, the process of making this purple was beyond disgusting, as Finlay explains, "More than 250,000 murex brandaris and murex trunculus shellfish were needed to extract half an ounce of dye, just enough for a single toga."

And according to Finlay's book, the process of making the purple smelled so bad that it had to be done outside city walls. This disgustingness then stuck with the color:

These purple vats had to be outside the city walls because no one could live next to the horrible smell made by rotten shellfish soaking in stale urine mixed with wood ash and water. Even the clothes that had been dyed with them had a distinctive odor of fish and sea. The historian Pliny called it "offensive," but for other Romans it was the smell of money.

According to Smithsonian, this gross process more or less continued as late as 1856, when a new purple was created as the first synthetic dye by an 18-year-old chemist named William Perkin.

What caused Vincent Van Gogh's mental state has not been conclusively determined, but that his own painting might have been a big factor is certainly an interesting theory. In a paper called "Vincent van Gogh and the Toxic Colors of Saturn," by F. Javier González Luque and A. Luis Montejo González, it's argued that the lead paints, particularly Van Gogh's "chrome yellow," may have been the cause stating:

Because of his impasto technique, based on thick layers of paint, Van Gogh resorted to colors with a high content of lead, such as white lead (lead carbonate) or chrome yellow (lead chromate), in the mixtures he prepared. These pigments are highly toxic in oil painting, and their use entails the risk of saturnism.

If the "chrome yellow" was to blame, it would have been particularly harmful to Van Gogh when he squeezed a tube of the paint into his mouth as Finlay writes in The Brilliant History of Color in Art.

A few notable tests support this claim, with one by University of Durham in 2005 even stating that sports uniforms should be rethought due to the advantage. The study concluded "red enhances human performance in contests," but also said:

Across a range of sports, we find that wearing red is consistently associated with a higher probability of winning. These results indicate not only that sexual selection may have influenced the evolution of human response to colors, but also that the color of sportswear needs to be taken into account to ensure a level playing field in sport.

Maybe the red Chicago Bulls uniforms are partly why Michael Jordan won so many championships?

Another study by Samford University in 2008 that focused on the "effect of light color on muscular strength and power," stated that a "repeated-measures multivariate analysis of variance indicated that average muscular power was significantly higher when performing the test in the room with red light compared to rooms lit with blue light or white light." So Roxanne probably should have put on that red light.

This red-effect even seems to affect video games as a 2004 study discovered that red players tend to win more often.

Although this spray painting didn't come from cans, the Lascaux Caves paintings from about 17,000 years ago were most likely done with a technique that involved spraying paint on to the cave walls. In The Brilliant History of Color in Art, Finlay explains, "The paint on the Great Bull was applied by mixing ground minerals with something liquid and then spraying it from the mouth, either straight or with a blowpipe."

These tubes would be made from wood, bone or plant materials.

The famous Lascaux cave drawings weren't the only early artwork to use spray painting, according to Finlay's book, "You can see similar techniques in other caves, not just in Europe but also in Australia from 40,000 years ago, as well as in the kalahari Desert in Africa, in the Patagonian Mountains in Argentina, and in Baja California."

Eliza Lucas is something of a South Carolinian hero as she developed the cash crop of indigo during the colony's early days. In the mid-eighteenth century, she began attempting to grow indigo, but it didn't go so well at first. As Finlay explains in The Brilliant History of Color in Art:

Her first crop was destroyed by frost, and the second season in 1741 was even more disastrous ... The third crop was eaten by caterpillars but -- and persistence is often a thread in the history of colors -- the fourth crop was just right, and in 1744 Eliza Lucas produced South Carolina's first-ever indigo crop.

Despite all the setbacks, including internal sabotage in that second season, Lucas, at the young age of 21, successfully created an indigo crop for the North American continent. 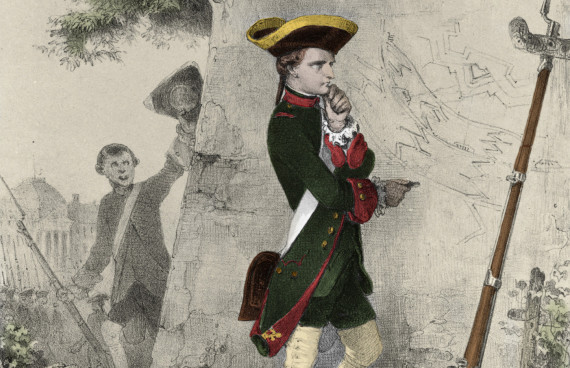 In 1775, Carl Wilhelm Scheele developed what would become known as "Scheele's green." The color, which used arsenic, unfortunately became popular for children's bedrooms as well as dresses, and fatally poisoned many people.

Skip ahead to 1821, when Napoleon Bonaparte died on St. Helena Island in exile. At the time, it was considered mysterious that he had arsenic traces in his hair, but as Finlay writes in The Brilliant History of Color in Art, in 1980 a stolen swatch of Napoleon's bedroom wallpaper surfaced that had a Scheele's green fleur-de-lys. Due to the humidity of St. Helena Island, the arsenic could have very well poisoned Napoleon while he rested in bed, contributing to his death.

It has also been discovered that Napoleon's bathroom also originally had the green wallpaper. In there, Napoleon would use steaming water to relax, further causing the arsenic to poison the former French leader. 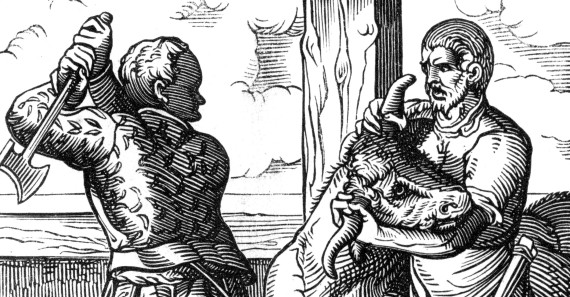 This filthy red was called "madder red." Robert Chenciner writes in his book Madder Red: A History of Luxury and Trade that one recipe for making the color had 13 steps, a few of which are particularly gross. A brief description of the general process:

The fabric was boiled and then mordanted with cow-dung and oil, followed by three oil-baths. Next there was a succession of four sodium-carbonate baths, followed by washing, galling and sumaching, aluming and a final clean. After lengthy preparation, the fabric, which varied in color from white to gray, was dyed with madder which contained a variety of extra ingredients. The strangest was ox blood.

Chenciner continues on to explain that ox blood was seen to have magical powers by the superstitious "Oriental dyers." In the book it's also pointed out that Nathaniel Hawthorne alluded to this process in The Scarlet Letter, writing that the letter on Hester Prynne's chest had the smell of blood.

Finlay explains in The Brilliant History of Color in Art that the process started as a Turkish recipe for turning the color into dye and eventually in Europe the Dutch figured out a process in 1730.

The Royal Tapestry Manufactory of Les Gobelins in Paris particularly used the color in the 17th century for the wall coverings of King Louis XIV. Ox blood and cow or sheep dung steeped in rancid castor oil hung from royal walls. 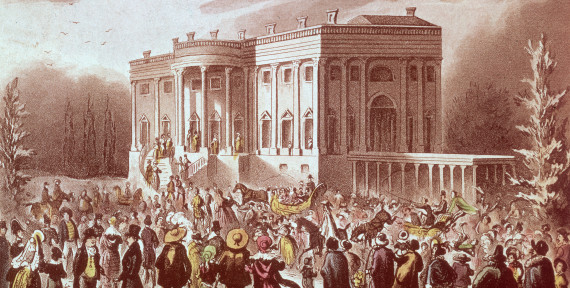 Pierre Charles L'Enfant was appointed by George Washington in 1791 to plan what would become Washington, D.C. As Finlay explains, the early Americans wanted something based on what they believed ancient Rome and Greece looked like since many aspects of their new government were influenced by these cultures. Unfortunately they had the look all wrong:

Most of the important buildings and sculptures of ancient Greece and Rome were not white. We now know that just about all of them were once covered in bright designs; some were even decorated in pure gold leaf. But that didn't fit with what people in later centuries wanted to see. They thought colors were frivolous and showy, and they preferred to imagine an idealized, pristine white classical world.