Prince George isn't even a week old, but he's already responsible for a substantial boost to the British economy.

The royal nipper's birth is expected to bring $380 million into the U.K.'s economy, including $95 million in booze sales alone, according to the Atlantic.

Designer Lydia Leith is hoping that Prince George's loyal subjects tired of toasting the baby's birth might instead want to upchuck in her royal barf bags.

It's a bit of a tradition for her, having also designed barf bags for the royal wedding and Queen Elizabeth's diamond jubilee.

Leith's barf bags may be useful to customers of Domenico Crolla, a pizzeria owner in Glasgow, Scotland, who is selling perhaps the cheesiest royal baby tribute ever: A pizza featuring Prince George with his parents, William and Kate.

Making the pies is a royal pain-in-the-neck for Crolla, who spends 90 minutes on the pizza portraits.

Anyone hoping to jump on the royal baby bandwagon should be warned that the market is diverse, and some of the products sink to all levels of tastelessness.

Back in 2011, a company released the "Crown Jewels," a line of condoms created to "honor" the royal nuptials.

Considering the rousing support, the new royal baby is receiving, it's safe to assume the company won't be issuing a "Prince George" edition. 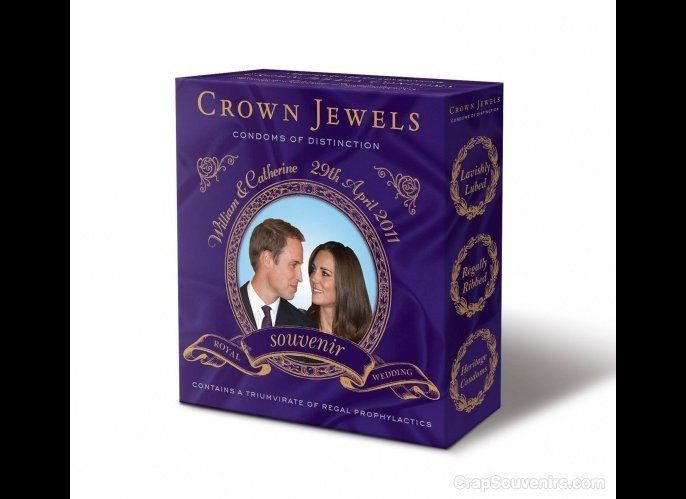 1 / 11
A Whole New World Of Crap Souvenirs
Travel writer Doug Lansky, the creator of CrapSouvenirs.com, says, "this special Royal Wedding-themed package of condoms will help turn any impending romantic moment into a debate about the nuances of acceptable merchandising."
CrapSouvenirs.com