[5/2 UPDATE: The exhibit's opening has been delayed due to news of Osama bin Laden's death. Opening will happen later this week.. The L Magazine confirms that Mayor Bloomberg, who was set to participate in the opening ceremonies of Weiwei's exhbit, cancelled his appearance in order to publicly address the death of bin Laden]

The internationally-acclaimed artist, known for his "Sunflower Seeds" work at the Tate Modern and many other projects, was detained by authorities in his native China earlier this month. And although a Hong Kong newspaper reports that Weiwei was arrested for "tax evasion and destroying evidence", his family, and protesters around the world, claim he was apprehended for criticizing the Chinese government. The United States, Germany and Britain have said openly that Weiwei should be set free.

Despite his unknown whereabouts, New Yorkers will still get the chance to see Weiwei's "Circle Heads/Zodiac Signs"--a sculpture featuring twelve monumental bronze animal heads all weighing over 800 pounds at the Pulitzer Fountain in the gateway to Central Park. Representing the 12 animals of the Chinese zodiac, the work was inspired by the famous fountain-clock of the Yuanming Yuan, an 18th-century imperial retreat just outside Beijing. Following its debut in New York, the sculpture will be displayed across the world.

May 2 through July 15, 2011 at the Pulitzer Fountain in Manhattan’s Grand Army Plaza, the gateway to Central Park, at 59th Street and Fifth Avenue. Exhibition is free. Presented by the Chinese contemporary art organization AW Asia in cooperation with the City of New York. For more information, visit www.zodiacheads.com. 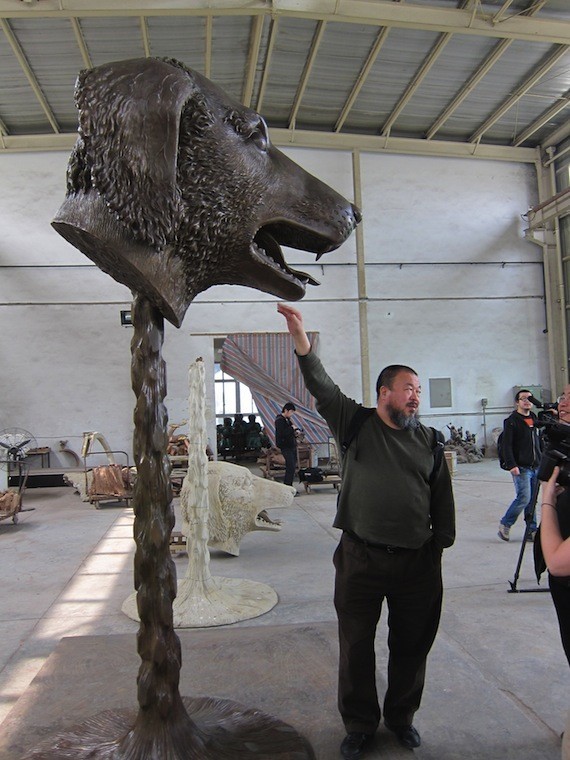