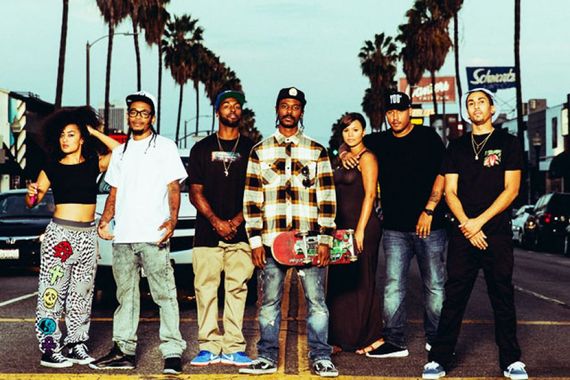 Unless you're from Los Angeles, you may not know about Fairfax Avenue, home to the next generation of creative entrepreneurs. Welcome To Fairfax, a new series on Pivot, delves into the personal lives of some of the area's key players working to build creative businesses. In its first season, the show's cast includes storeowner Gavin "Mizzle" McNeill, BMX rider Gabe Brooks, newcomer Tori, and rap group the Chill Black Guys (CBG).

Welcome To Fairfax executive producers Ben Selkow and Ryan Sidhoo share how the show came to be, behind-the-scene stories, and much more.

What inspired the development of Welcome To Fairfax?

Ryan Sidhoo: Having cool parents who embraced the "black-sheep" reputation we had in the neighborhood gave me a lot of freedom growing up. They were introducing me to different sub-cultures, under the radar films and crazy music scenes from the age of 4. I remember my dad taking me to punk shows when I was 5 or 6, and skate competitions like Slam City Jam in Vancouver. Because of my upbringing and exploring different worlds, documentary filmmaking was just a natural fit for me. It was something I knew I wanted to immerse myself in.

RS: Fast forward a few years, I was cruising the Subway in New York while I was studying film there, and I came across a group of young black skaters that had the most eclectic, psychedelic style, and a light just went on in my head: there is no content out there that focuses on the black skate scene. That was the moment that planted the seed for the project. After making a few calls to my brother who has deep ties to Fairfax, he put me in touch with Julian Smith of The Chill Black Guys. I drove across the country and shot a ton of footage on Fairfax.

Through hustling around New York and being on as many sets as possible, I fortunately met Ben and we instantly hit it off. We share the same sensibilities and interests. I knew I was sitting on something amazing and he was the first person I showed. Off the bat, he had the same passion and energy for the project as me. I remember we would be playing pick-up basketball down in the Village and just talk for hours about the project in between games. We eventually teamed up with Matador Content and a few years later, here we are.

What are you thoughts on the notion that music, entertainment and arts are the only viable options for inner city youths, primarily for those of Latino and African decent? Was this topic discussed while developing WTF, if so, what were the concerns?

Ben Selkow: Certainly the notion that the only escape for inner city youth from the vicious cycles of poverty is music, entertainment, the arts or athletics was not lost on us in developing this show. Ryan and I were always interested in pushing new themes, bending old expectations, and mostly creating a docu-series that allowed nuance, subtlety and context to flourish; not stay in a single-dimension reality show archetype characterization of people. So while in a logline you might assume the cast is "escaping" via the same old methods, I feel like we created a world that represents something to work towards; not perfect, not idyllic, but in the right direction. The world is entrepreneurial, collaborative, race agnostic (but conscious of class and race-based institutional barriers). It is a culture where no one sees themselves as a victim or uses excuses. This is what defines hustle and grind for real for me.

RS: In general, I feel the media today blitzes most kids with role models from the entertainment world. All you see are larger than life billboards of athletes and actors. As a 90's kid, I wanted to be "like Mike." What Pivot has done with the Fairfax series, is drive viewers to the show's website where there is a "Start Your Own Business" tool-kit that can apply to a number of ventures outside the arts. There are resources on there from legal advice to accounting tools. The show makes an honest effort at channeling the "Do It Yourself" mantra of Fairfax and building off of that. Looking at the series, Mizzle does run a clothing store but regardless of what he sells, his story is so much about the ABC's of running a business. You can apply a lot of the principles you learn from his narrative to different pursuits outside the arts. I feel the focus of his narrative is on running a business and less about the glitz and glam of being in "fashion."

What is it like developing a show for television? What are some important technical aspects viewers may not be aware of?

BNS: Developing a show for television is a long process--so be prepared, passionate and communicative. From the most basic producing elements, you want to have great dynamic people as characters, you need trust and access, and then you need to translate all of that into the formal elements. This is an inherently collaborative process. Once we had a smoking, three-minute sizzle reel to show around, we took the promo out to other partners. We worked with so many folks from our production company brothers, Matador Content run by Jay Peterson and Todd Lubin, to the network, Pivot, creatively led by Belisa Balaban, Christy Spitzer, Lyle Gamm, and Jihan Robinson, along with their outreach and advocacy efforts in Takepart.com, etc. With so many involved, I think it is vital to set the tone, aesthetic and ethics of the world you want to depict in the sales and presentation reels. This should become a reference for "this is what we want to make."

As Ryan mentioned, the development phase is very freeing. There generally is very little money at that phase so we were mirroring the DIY notions of our world with our own filmmaking. Small team, quick decisions, limited resources, and complete focus on getting as much trust and access to the core stories and emotions of our cast. I echo what Ryan said -- there's something liberating in the lean-and-mean phase of development, but when you get the additional resources and support, when all the partners are involved, you can get some really powerful collaborations ignited. The trick is to constantly remind yourself of why you are there and what the story is you are trying to tell.

RS: Developing a show - I love it. Being a one-man-band production crew shooting a sales tape-total run and gun style, the late nights in New York grinding on pitch materials with Ben, tinkering with the sales tape, finding the right music and sound FX's for the sizzle, all of that- that process was so much fun for me. I live for that.

RS: However, once the show gets green-lit and you are producing a piece of content that is going to air on a national level and a network is involved, everything changes -- there is a need for a ton of paperwork. People come up to me and talk about the show and say, "Why didn't you guys film at this party, or how come you didn't use this Kendrick Lamar song?" I have to explain to them all of the hurdles you have to jump over: countless permits needed, location releases and different copyright issues that need to get sorted.

From a technical aspect, you have to take all of this into consideration and adjust to the elements. You might be filming at a party and the DJ refuses to turn down that Kendrick song, and then you run the risk of missing a great conversation between the cast members because the music is too loud and you don't have the resources to clear that song. You just have to combat this with nimble and crafty filmmaking. Maybe you get that conversation on the car ride over, or you relentlessly pester the DJ to the point where he will turn down the music for 5 minutes. It's like a boxing match -- lots of counter-punching to get the knockout material.

What would you say makes Fairfax unique?

RS: I don't know anywhere else in the world where there is a two-block stretch of such a concentration of talent. Most people who I have met through this process that are native to Fairfax, they are just so gifted and dedicated to their craft. Even the guy who is selling you a t-shirt, on his off time, he is producing an amazing skate video shot on an 8mm film camera and organizing a premier party for it. I look at Julian from CBG, who is featured on the show -- the guy just kills it with whatever he does. He could be a pro skater if he truly honed in on it and he is about to put out a fresh new sound with his music. I joke with him all the time and tell him, "What can't you do?" He's like the DIY Bo Jackson (in reference to the "Bo Knows" commercials).

BNS: Those few blocks of Fairfax operate like a lot of community spaces -- beauty parlor or barbershops, hoop courts, diners, etc. It's where you come and connect. But something about it feels like the best of Los Angeles, a confluence of young folks of every background, trying to rise above. Not everyone is going to make it, but there's so much talent there, you have to keep your eye on everyone to see who will be next. That's a pretty exciting nexus to be kicking it at.