The city's government faces a management crisis for the ages, as it copes with bankruptcy and the remaining demands of the fast approaching 2016 Olympics. These are the lingering imprints of the (non) governance of the PMDB (whose leader is the country's interim President Michel Temer) which has been in power in the state for almost a decade. It's also an administration that had received a stamp of approval from suspended president Dilma Rousseff's Worker's Party (PT), considering its past ties to former President Lula and ex-Governor Sérgio Cabral. Current Governor Luiz Fernando Pezão, who is away on medical leave, had also received support from Rousseff.

Exorbitant spending has provoked debts in the billions. And the bill arrived just in time for the 2016 Olympics.

Since the beginning of 2016, public health services, security operations, and public transport have worsened by the day. Thousands of civil servants, professors, policeman haven't received paychecks.

Accustomed to the vision of the Marvelous City they see on the postcard, tourists landing at Rio's Galeão Airport might be in for a shock when they get to know the real Rio de Janeiro.

Hell de Janeiro. Hell is right here. That's the warning that hundreds of firefighters and policeman have been offering to tourists. It's a part of their planned protests against salary delays.

"If you come to Rio you will not be safe," read the banner held by protesting public security forces in Rio's Galeão Airport as tourists entered the city earlier this week.

Fireman Vanderlei Duarte bemoaned the government's negligent attitude towards the people responsible for the protection of Brazilians, tourists, and athletes: "Criminals look at our IDs and kill us. How can a city without security host the Games? For the Olympics [the state] gives everything. For us? Nothing."

In the streets, Rio's crime can paralyze those who aren't used to seeing such violence.

Stray bullets continue to rack up new victims. An estimated €400,000 in TV broadcast equipment was stolen from a German film crew in the city's center at the beginning of the month.

Three Olympic athletes from the Spanish sailing team were assaulted in the Santa Teresa area of the city's center in May.

In the first trimester of this year, the number of stolen mobile phones shot up 40 percent in Rio de Janeiro.

Attacks on buses are up by 21 percent and auto theft is up 15 percent.

During the Olympics 350,000 foreign tourists are expected to arrive in the city. It's hard to imagine these newcomers will be wise to the street tricks with which Rio dwellers have grown accustomed to on an almost daily basis.

Just last weekend, in the most recent episode of this saga, street gangs came out heavily armed, sporting rifles, as they stole cars and other property in the Zona Norte area of Rio.

The state government has also lost control of its prisons, where crime remains pervasive.

The alert was raised on Tuesday by Judge Eduardo Oberg. Even behind bars, criminals, who apparently have easy access to cell phones and drugs, continue to commit crimes. And in their cells, inmates receive illegal gifts, even meals from fast food chains.

"[Security] is the most serious issue facing Rio and the state is doing an awful, horrible job of facing it. The government is completely failing in its responsibility to police and to protect its people."

In Rio, the health care system, known as SUS, is practically in the ICU. Out of money, State Health Secretary Luiz Antônio Teixeira Júnior has stated that there is a possibility that health services will be discontinued during the Olympics. "We are always working under the shadow of that risk," Teixeira admitted.

Emergency Health Centers have already been closed this year, and even hospitals face the risk of closures.

In the Nova Iguaçu Emergency Center doctors have been pictured using trashcans as makeshift office chairs. 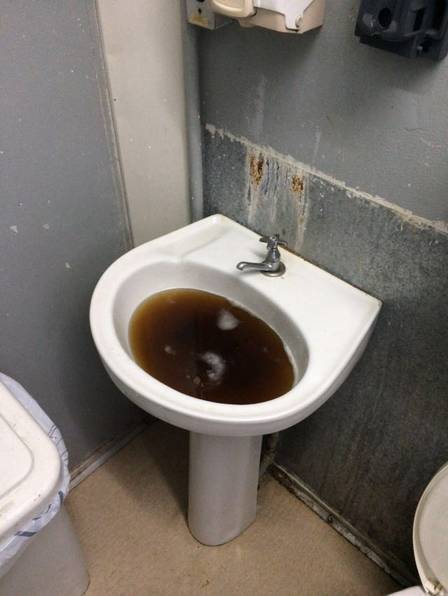 Tourist and Olympics Sites Aren't Without Their Health Risks Either

Last month, scientists from the Federal University of Rio detected the presence of a super bacteria in the waters off of five beaches in the city: Copacabana, Ipanema, Botafogo, Flamengo, and Leblon.

Copacabana is set to host triathlon and marathon swimming events. Rodrigo de Freitas Lagoon, in the south zone, is another contaminated area.

Resistant to antibiotics, the super bacteria can cause various types of infection, including meningitis.

The emergence of this powerful bacteria is just another symptom of the terrible practices undertaken by government authorities and the irresponsible management of resources in Rio.

The mismanagement of hospital sewage waste, which for years has been flooding into rivers, creeks, and gutters, made possible the development of this new health threat.

All that which is most rotten in Rio, all of which Brazilians were deeply familiar, will finally come to a head during the Olympics, where they will be seen under the entire world's spotlight.

In a telling message to all those en route to Rio, the Mayor of the Marvelous City cautioned "Do not come here expecting Chicago, New York or London. Compare Rio to Rio."

Editor in Chief at HuffPost Brasil