Last fall, our CivicScience research team reported a not-so-trivial finding in our U.S. polling data -- for the first time since we began tracking consumer opinions on what influences them, television advertising was equaled by the influence of comments made on social media. Considering television's long-time dominance in marketing, this discovery made waves across our humble social channels. 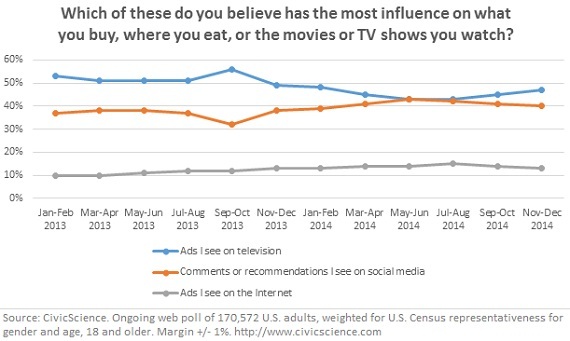 Television advertising did regain a small lead in the fall and winter months of 2014 (it's no shocker that TV's influence follows the seasonality of its programming). Still, the gap between TV and social chatter is a sliver of its peak. Internet advertising, meanwhile, has shown steady gains, but remains a distant third.

The continued rise of social media's impact comes as no surprise. Well-known forces are at work here: More people, particularly older people, have migrated to Facebook, exposing them to more comments from friends and family. Time-shifted TV viewing allows consumers to fast-forward through more ads. Streaming services allow us to avoid them all together. Increased clutter and declining trust in advertising could also be a factor.

But let's be clear: TV is still king when compared to other advertising mediums like radio, print news, magazine or online (including social media advertising, which is much different than user-generated comments and recommendations). If TV ad sales execs play their cards right, they may even be able to harness social media influence to grow their dominance even further. How exactly should they do that? A look at more data could provide the answer.

In January, our researchers used the CivicScience data to publish extensive findings about the behaviors and psychographics of the so-called "Market Maven." Maybe you are one. Have you ever waited in line to buy a new Apple gadget the day it came out? Do you walk into work telling your colleagues about movies or concerts you saw over the weekend? Do you try new products before all of your friends do? And, do you -- naturally and authentically -- use social media to tell everyone about it? If you answered yes to all or most of these questions, you might be a Market Maven. And you, yes YOU, are the most valuable and powerful person in today's consumer landscape.

I know what you're thinking: "Marketers have been talking about 'influentials' for years. This is nothing new." And you're right. Companies like Klout were borne of this trend nearly a decade ago -- perhaps ahead of their time. Klout users earn points based on the size of their social network and the frequency and quality of their activity. The problem with models like Klout's, however, is that it's not human nature (or at least any human I want to drink beers with) to join a website just to prove how connected and influential they are. I would bet most Market Mavens don't know they are one.

The truth is that Market Mavens occur naturally in the wild. They go out to eat, they follow sports, they read AdAge, they buy groceries and, yes, they watch TV -- and then they talk about all of it. It's that last step that matters the most. As comments and recommendations from our friends become ever-more influential in our decisions, the early behaviors and impressions of these Mavens are absolutely, undeniably critical. Winning and keeping these customers should become among a marketer's top priority.

But here's the rub. The advertising economy isn't optimized for finding and targeting the Market Maven. As our research uncovered, Mavens aren't defined by a particular age, income or other basic demographic. They are young and old, male and female, rich and not-so-rich, black, white and Hispanic. Traditional approaches, like buying the coveted 18-54 male demo, are like hitting a nail with a sledge hammer. Moreover, bulk-buying of standard ratings points or impressions misses the mark. One Market Maven can be 10 times, 100 times or even 1,000 times more valuable than a single non-Maven.

To reach Market Mavens, advertisers first need to understand who they are and where they're concentrated. As a group, Mavens can be generally defined by their adopting and talking about new stuff -- but marketers shouldn't stop there. The real magic happens when finer segments are mapped. As our data tells us, grocery-buying Mavens vary from music-buying Mavens, which vary from apparel-buying Mavens. They read different content. They watch different shows and in different ways. This complexity places a daunting demand on media buyers, but it's the way winners should think.

Advertisers also need to develop campaigns that appeal to Mavens. Think about T-Mobile's extremely-successful Jump campaign in 2013, which allowed subscribers to upgrade their phones anytime during a contract period -- Mavens could have the latest and greatest phone whenever they want. This campaign helped T-Mobile snag early adopters who once flocked to AT&T when AT&T had exclusive rights to the iPhone. Brilliant research combined with brilliant creative to form the perfect campaign.

Market Mavens are out there, they can be found and profiled, and as social media grows its influence across the demographic spectrum, they're rapidly growing in importance. Media companies that know how to deliver them and marketers that know how to woo them are going to have the upper hand. As long as television continues to have the largest audience reach, we like their chances.