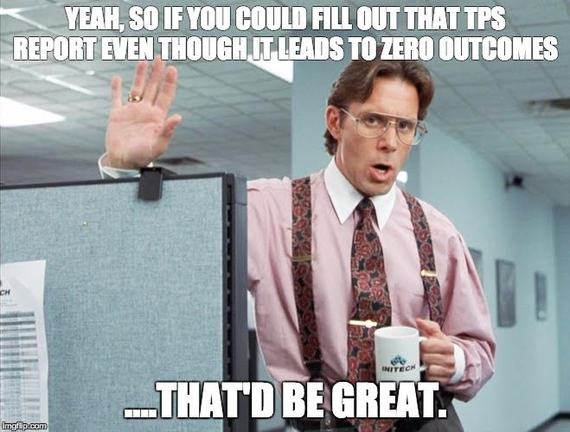 Let me level with you: America is kind of broken.

For example: Did you know that it now takes longer to permit a single wind project in the remote desert than it did to build the entire Hoover Dam? Wherever you look -- from Congress to K-Mart -- the institutions we've relied on to produce basic outcomes like laws and socks that last more than three washings are unraveling. Washington DC is in gridlock while China, India and other countries are poised to surge ahead of us. Jobs are now...gigs. Storage PODS are the next wave of housing after the 2008 financial crash -- here one day, gone the next. Modern infrastructure? Yeah, that's not happening this century, unless you mean the 1800s, which is when we built most of our railroad and water systems.

Of course, you know this. What you might not know is what's really driving the decline of empire here in America.

It's not politics, a dysfunctional Congress, unions, banks, the 24/7 Media Idiocracy or too many Real Housewives episodes that have stolen America's mojo (though this stuff certainly isn't helping...).

No, the core of our decline involves one central problem that none of the so-called experts in business and academia are talking about. Until now.

It's our WARLORD problem.

Because we've got one in America. Big time. And we need to get it fixed.

What's a Warlord you ask? Well go borrow your friend's Netflix password and stream the new movie Beast of No Nation with Idris Elba. You will get a glimpse of what a standard-issue Warlord looks like (and perhaps the next James Bond as well).

But home-grown American-style Warlords are a whole different creature.

These change-averse, power-grabbing U.S.-based Warlords are working and living amongst us in every walk of life. Think of Warlords like a malware on your computer: they wedge their way in, gum up the works and pop up demanding unwanted attention.

American Warlords come in all shapes and sizes, but they share two things in common: (1) an insatiable need to hoard, and (2) a mindset that is more closed to change than open to innovation. Warlord likes things the way they are. America Warlordism is so powerful that it transcends even traditional left-right, Democratic-Republican political conflicts.

You may not know it, but you regularly encounter Warlords in daily life. Sure, maybe they're not imposing, poorly shaven ISIS border guards, but they're Warlords just the same.

Maybe it was the grump at the DMV reviewing your driver's license application who sent you home yesterday because they needed a 3rd piece of identification as a form of petty tribute.

Or maybe the Warlord is that person at your job rejecting all your cool ideas to fix problems with the same refrain: "uh, sorry, that's not how we've done things before... so... uh... no."

Or the UX (user experience) genius that decided how many characters and symbols need to be in your account passcode -- and how you must format bullet points in your documents. Debilitating stuff affecting millions of well-meaning citizens every day.

Warlords too are the reason it takes longer to permit a wind turbine project than it did to build the entire Hoover Dam. Permits happen on the Warlord's schedule.

But when speed suits them, Warlords leverage that too -- just like the Virtual Warlords on Wall Street do with their high volume trading. While building absolutely nothing, they take a cut from everyone.

So let's quit beating around the bush: Warlords are ruining America -- and not just as measured by the Gross Domestic Product and nerdy stuff like that.

Warlords are making America less fun. Less can-do. Less a place where people can agree to give a little to get a little.

In the future installments -- yeah, I am stretching this out into a book or something semi-educational, sorry -- I'll explain more how you can spot the Warlords that are messing with America's mojo and what we can do about it. But right now I bet you have already had your own Warlord experience - care to share? Email me at Daniel.Carol@georgetown.edu.