Starting today, three bills are being rammed through the Wisconsin legislature that will put the final nails in the coffin of our state's long history of clean elections and accountable governance. 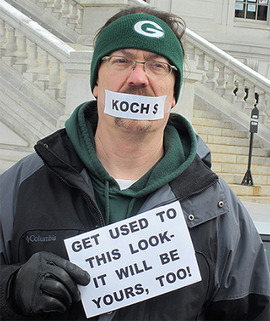 The same group of GOP leaders who attempted to gut the state's open records law over the 4th of July weekend are now calling for secrecy in campaign spending and for dismantling the two major avenues for investigating political corruption.

Stung by the campaign finance probe into a "John Doe" criminal investigation into potentially illegal coordination between Governor Scott Walker and independent secret money groups, the Koch-ALEC cabal is on the warpath.

They want to dismantle the last remnants of the post-Watergate campaign finance system which placed limits on campaign donations and required transparency for donors, large and small.

The first bill, AB 387/SB 292, authored by ALEC members Robin Vos and Scott Fitzgerald, retroactively decriminalize much of the illegal coordination at the heart of the "John Doe" investigation of Governor Walker. By allowing candidates to directly coordinate with so-called "issue ad" groups, donors and corporations will have a new avenue for giving unlimited money, with the full knowledge of the candidate, but with no disclosure to the public or the press.

Further, almost any spending by outside groups like the Koch brothers' Americans for Prosperity can remain secret, even if the group is running ads expressly calling for the election or defeat of a candidate. As long as a group declares that express advocacy is not its "major purpose" it can keep its sources of funding hidden from the public. Groups engaging in express advocacy within 60 days of an election will need to report their spending, but can continue keeping their donors secret.

These changes are an open invitation to quid pro quo corruption, so it is fortunate that legislators are also seeking to pass two bills to prevent either the Government Accountability Board or the District Attorney from investigating political corruption.

Shutting Down Investigations by the Elections Board

AB 388/SB 294, will get rid of the retired judges who run the Government Accountability Board, the nation's only independent, nonpartisan board to oversee elections and ethics. They will replace the judges with partisan appointees ensuring gridlock modeled on the broken Federal Elections Commission. Under the bill, the GAB cannot itself launch an investigation and it will no longer have a sum-sufficient budget for investigating corruption.

AB 68/SB 43, authored by ALEC member Dave Craig and Senator Tom Tiffany, will give politicians what is essentially "political corruption protection" by not allowing the state's "John Doe" law to be used for political corruption cases. The current law, which operates much like a Grand Jury but in front of a judge, has been used for every successful criminal prosecution of politicians in recent years.

Speaker Vos says that the changes to the campaign finance system are needed to conform the law with recent U.S. Supreme Court cases.

None of the court decisions mandated that the legislature exempt outside groups from disclosure, legalize coordination with issue ad groups, or allow unlimited corporate funding for political parties.

Over and over again in a marathon hearing last week, citizens asked the legislature: who is asking for these bills?

As my colleague Brendan Fischer reported, the only group lobbying in favor of the bill to deform the GAB is David Koch's Americans for Prosperity, which spent $10 million in Wisconsin during the 2011-2012 recall elections of Governor Walker and other state officials. A newly-formed group called "Wisconsin Alliance for Reform" has begun running radio ads supporting the bill; its web domain was registered by Lorrie Pickens, a former leader of AFP, and its Executive Director is Luke Fuller, a former staffer for the bill's sponsor Sen. Leah Vukmir (who is also the number two at the Koch-backed American Legislative Exchange Council, or "ALEC.")

The Kochs are even trying to buy Bucky, exclusively branding the UW Badgers Football game on October 31.

In the state formerly known as Wisconsin, you cannot make this stuff up.