As my two old friends, Sting and Peter Gabriel, make their way to the Verizon Center on June 23 in Washington DC, I want to remember their work in bringing the message of human rights to the world. Sting and Peter were the backbone of the musical tours Bill Graham and my staff and I produced for Amnesty International in the late 1980's. Amnesty was a relatively small operation at that point, but the Conspiracy of Hope tour in 1986 changed all that. 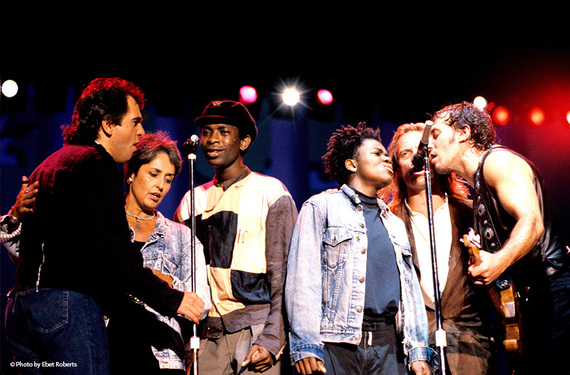 The tour played in sold out arenas in San Francisco, Los Angeles, Denver, Atlanta, Chicago, and at Giant Stadium in NYC. The last concert was shown live on MTV for 11 hours. The result was that Amnesty netted more than $3 million and gained 45,000 new members.

Sting was in the process of becoming Sting instead of being The Police. Peter had not been on tour for three years. He too was becoming Peter Gabriel after Genesis. They were not new to Amnesty. Sting had sung in the Secret Policeman Ball. Peter Gabriel had followed the literature of Amnesty for years. The tour was honored to be joined (and also led) by U2, Bryan Adams, Neville Brothers, Joan Baez, Lou Reed, Jackson Browne, Little Steven, Bob Geldof, Dave Stewart, Miles Davis, Peter, Paul and Mary, Third World, Hooters, Yoko Ono, and Bob Dylan.

A & M Records became the home for our LA operation. MTV creator Bob Pittman gave Amnesty the rights to sell ads on the channel for those hours as well. John Huston and Robin Williams led another crew of talent into the PSA campaign filmed by Bill Fertik.
Peter's song Biko honored the youthful South African leader who was tortured to death. It lit up the stage for human rights, shifting the concerts into the realm of healing, remembering, and acting. Before Peter, it was a concert. After Peter sang Biko, we were a movement. Sting had a new band and was obviously into the vibe. U2 with their raw energy and talent were on their way to becoming the mega force they have become. All the artists won over the crowd. But the song Biko put the heart into the body of the concert. It changed everything on that tour, especially the performers.

Not that the concerts were happy for all. Many in the movement thought the concerts trivialized the movement and/or human rights. New Republic kept writing criticisms as did many national sections of Amnesty around the world. But the press coverage throughout the six city tour was enormous and television coverage embraced the Conspiracy of Hope. All the musicians performed at their best and rocked each venue. None of musicians were paid for their participation in any of the concerts. Muhammed Ali spoke eloquently to the crowd about his faith and the need for human rights, followed by Dick Gregory.

In 1988, Sting had already written and played They Dance Alone, the anthem for the women whose husbands had been disappeared who never stopped demonstrating with their husband's photos on their breast. Like Biko which had become an international anthem against apartheid, Sting's song was about to become the Latin American anthem for the disappeared. Along with the dedicated talent of Bruce Springsteen, Tracy Chapman, Youssou N'Dour and Peter Gabriel, we played in 20 cities on every continent around the globe. The Human Rights Now tour had its two anthems that moved our audiences from concert to human rights events. The artists opened each night to Get up, Stand Up to honor Bob Marley and to set the tone for each concert. The Mothers of the Disappeared in Chile met the mothers of the disappeared in Argentina for the first time on stage when they all came out to join Sting for the song. The people all wept. Our tour honored the Universal Declaration of Human Rights (UDHR). At the Toronto concert, upon meeting John Humphreys, who actually wrote the Universal Declaration of Human Rights under the supervision of Eleanor Roosevelt, I asked if this tour trivialized the UDHR. He answered, "It was the best thing that has ever happened to Universal Declaration of Human Rights."

In 1990, again I called on Sting and Peter. Pinochet had lost the election in Chile, and I was asked to produce a two-day concert in The National Stadium where so many had been arrested and disappeared. Peter and Sting easily agreed, as did Wynton Marsalis, Jackson Browne, New Kids on the Block, Intellimoni of Chile and more. With the Andes in the background, the concert clearly spelt out to the young of Chile the history of the last 16 years in Chile. They learned in two days what had happened to so many; torture, disappearances, and death sentences. We were live throughout Mexico, Latin America and Spain (arranged by Pino Sagliocco). At the closing, Sting brought on the Mothers of the Disappeared and the place wept and looked forward to its nation moving away from torture, disappearances and death sentences. The national soccer stadium was given back to the Chilean people because the musicians had cleansed that stadium with their music and truth.

Sting and Peter Gabriel set up effective human rights groups as well, namely, Rainforest Fund and Witness respectively. Both do not believe in the death penalty. Peter Gabriel is also one of the Elders.

Here in the USA, Peter contributed to the call for clemency for Leonard Peltier. 40 years in jail is enough. Peltier Is an American Indian who joined in the effort to support his people in a difficult time. He was a member of the American Indian Movement (AIM). The Walks for Development thatI led in the early 70's supported AIM with large grants. Many of the 40 years in jail were spent in solitary confinement. Clemency from the Obama administration is the call.

These two--Peter Gabriel and Sting are artists of merit and global citizens with a love and dedication to human rights. I hope you will go see them. Not just for the music. But for them, two of the finest human rights workers in the world. Again, it is music and very good music, but also music with a human touch and human rights. Welcome to Washington to Sting and Peter Gabriel. Thank you both. Our country needs those notes and your message.

Check out Create your Future to read more about the human rights concerts.
Please watch the YouTube videos (1-9) I will Leonard Peltier

What The Hallmark Is Going On? All The Christmas Stuff Is Here Starting Now