UPDATE: Under the erroneous headline, "Welfare Aid Isn't Growing As Economy Drops Off," the New York Times now reports on these numbers. They focus on the annual trend, which is still flat, rather than the third-quarter spike. The point is well taken, though -- the main accomplishment of the TANF program now seems to be keeping and kicking people off welfare, rather than serving their needs.

Who cares? I see no references in the major media to a striking reversal that should give pause to all those who have written off welfare as an issue -- including leaders of both political parties, none of whom raised it during the campaign.

For the first time since welfare reform gave birth to Temporary Assistance to Needy Families (TANF), there has been sharp increase in the number of families receiving benefits under the program. The third quarter of 2008 showed an average monthly increase of more than 5,000 families enrolled. The increase affected 37 states. 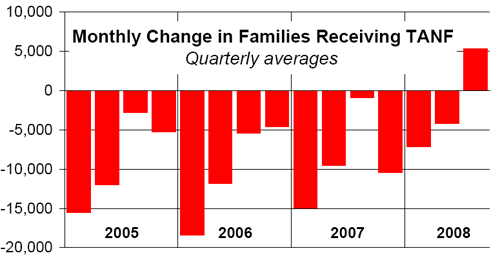 What should be striking in this is that the rolls are increasing even as the punitive program rules continue to pull aid from families according to the draconian term limits dreamed up by Gingrich, ratified by Clinton and endorsed by Obama -- 2 years continuous, 5 years lifetime in the program. The current stimulus package includes more money for TANF, to help cover an expected growth in families applying -- but no rule change to permit families to keep their support in the absence of available jobs.

A December petition made the case for suspending TANF term limits. But there is no visible action in Congress or the White House to take that step, to stop families from having the rug yanked out from under them right when the job market is at its worst.

From 1996 to 2007, the number of single-parent families with children living below the poverty line fell by a whopping 2.5%. Who says there's no progress in America? During the same period, however, there was a 60% drop in the number of families receiving welfare under TANF. Some of them got jobs during the roaring 1990s, and some of them got the boot when they reached their term limits.

Since the Democrats got the poor off their backs by giving in to the anti-welfare movement of the Small Society, success against poverty has been defined not by the number of poor people, but by the number of people receiving welfare. As millions of these families disappeared from view, the sound of applause from successive waves of politicians has echoed hollowly through the moral vacuum they created in the wake of welfare.