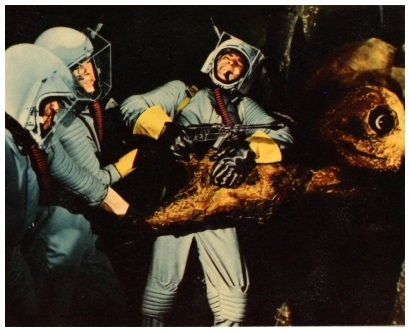 You know, we've always considered as our prime mission an elevation of the level of discourse in movie podcasts. Much like Cahiers du Cinema, we seek to enshrine the world of film as a true art form, analyzing the efforts its creators invest in fulfilling their unique visions, and exploring how the results serve to elevate humanity's understanding of itself and the universe.

And then a film comes along that features a group of astronauts on a mission to discover if there's life on Uranus, and all that goes out the window. A Danish/American co-production starring that ambulatory hunk o' granite, John Agar, Journey to the Seventh Planet is a film whose supreme silliness only starts with the sophomoric opportunities offered by its central premise. Come join the Temple of Bad team of Andrea Lipinski, Kevin Lauderdale and Orenthal Hawkins as they take on a tale that isn't satisfied with giving film-goers a giant, mutant, Cyclopean rat when a giant, mutant and quite noisy, spider, plus a bevy of women in filmy negligees, can be thrown in as well. Click the player to hear the show, or right-click the link to download.

Temple of Bad: Journey to the Seventh Planet