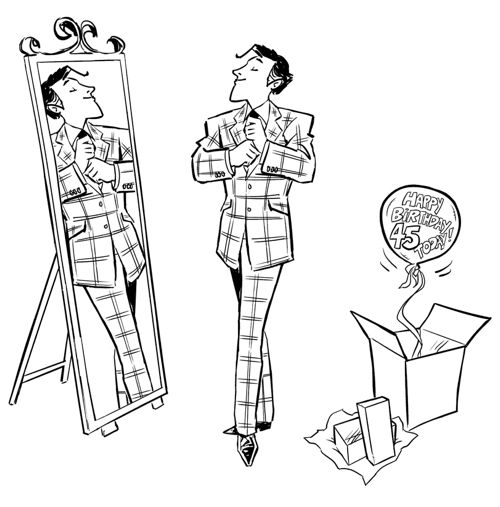 I'd like to share an essay from the latest issue of the Singapore-based magazine The Rake. Not too long ago I'd read Malcolm Gladwell's book Outliers and wondered how his ideas might apply to getting dressed. The result is a diverting little ode to getting better as we age.

For issue ten of The Rake, I wrote an essay about Balzac's "Treatise On Elegant Living" from 1830, which had recently been translated into English for the first time. One of the author's pronouncements is that while a man may become rich, he is born elegant.

Considering that one is born unclothed, and that elegance requires finery, we can safely assume that Balzac was speaking metaphorically. (Though for the record, I once claimed on Dandyism.net that I had joined a Tahitian nudist colony, and that ironically I had never felt more dandyish, being forced to rely wholly on attitude for cutting a dashing figure. As it was posted on the Internet, it was naturally taken as truth.)

But if Balzac was using rhetorical shock value to assert that elegance is bestowed at birth, and that money can buy finery but not panache, the point has a certain validity. There are certain men -- usually thin and good-looking, the bastards -- who look terrific in anything they wear, who appear to have put no effort into it and who seem to have been born with some genetic predisposition for wearing clothes well.

But the perennial nature-versus-nurture debate has lately reached the point where it's no longer a question of either/or. Certain men may be born with the kind of physique and charisma for which great clothes make the perfect pedestal. But they still have to practice dressing. They have to develop the faculty for what looks good on them, or rather what feels good since a stylish man can pull off anything provided he feels at ease in it. Even the naturally gifted have to fine-tune an intuitive barometer and reject temptation at a haberdashery, refusing a seductive novelty because, in the end, "It's really not me." And each morning they have to pick out a shirt, trouser and jacket, select a couple of neckwear candidates, and then choose the one that somehow reconciles the contradictory qualities of being utterly capricious and yet completely logical.

How long does it take to develop this ability -- just as Mozart composed in his head -- to imagine quadruple-lutz pattern mixings with one's eyes closed? Apparently 10,000 hours.

In his 2008 book Outliers: The Story of Success, best-selling author and New Yorker staff writer Malcolm Gladwell examines the serendipitous star alignments that must take place for a person to become the best in his field. Possessing a natural gift is not enough: One also needs to be born at the right time, luck, opportunity and practice -- about 10,000 hours of it.

Gladwell cites a study of violinists in which budding superstar soloists had ground out their 10,000 hours, while those settling for teaching careers had only logged in 4,000. In fact, multiple researchers have arrived at this figure as the benchmark for mastery. Gladwell quotes neurologist Daniel Levitin, who writes:

The emerging picture is that ten thousand hours of practice is required to achieve the level of mastery associated with being a world-class expert -- in anything. In study after study, of composers, basketball players, fiction writers, ice skaters, concert pianists, chess players, master criminals and what have you, this number comes up again and again.

Now let's apply Gladwell's approach to dressing. Starting at the age of 18 (a general threshold of adulthood, and also when I personally became interested in clothes), let's say you spend an hour a day training your style faculty. By this I don't mean taking an hour to get dressed (though that's a fraction of what Brummell supposedly spent), but the accumulation of a day's worth of fleeting moments spent leafing through magazines, window shopping, passing dapper gents on the street and perhaps watching a well-costumed movie. All told, an hour a day of sartorial observation, consciously or not. Following this pattern, a man would reach 10,000 hours of sartorial practice precisely at age 45.

This makes perfect sense. Why? Let's switch from Gladwell to another thinker, and someone who actually thought about clothing specifically: George Frazier, Esquire's late style columnist and author of The Art of Wearing Clothes. In Frazier's superb 1962 essay (which if you've never read, you should google immediately after indulging me here), he contends that the best-dressed men are all over the age of 40. Evidently people had thought this for some time: The fantastic 1930s Apparel Arts illustrations by artists such as Laurence Fellows reveal a preponderance of crow's feet and gray hair, suggesting that precisely during the "Golden Age of Menswear," when artists were asked to imagine the ideal personifications of elegance, they invariably depicted middle-aged men who would be not only in the position to afford the very best, but who were experienced enough to discern it, and distinguished enough to carry it off with panache.

For a real-life example of getting better with age (and practice), look no further than Cary Grant. Fonder of color and bold patterns in his younger years, by the time he reaches his final films such as North By Northwest and Walk, Don't Run, Grant had pared his look down to a monochromatic minimalism. Granted this was partly a reflection of changing fashions, but somehow Cary Grant came to look more like Cary Grant with each passing year.

Practice makes perfect, and the very act of perusing the pages of this magazine brings you closer to mastering the art of wearing clothes. We may not run as fast or jump as high as we did when we were younger, but it's comforting to know that with age comes wisdom -- and elegance.