If your social media feeds look anything like mine, you won't be surprised by this recent screenshot of a popular online magazine about New York City's increasingly swank wellness culture: 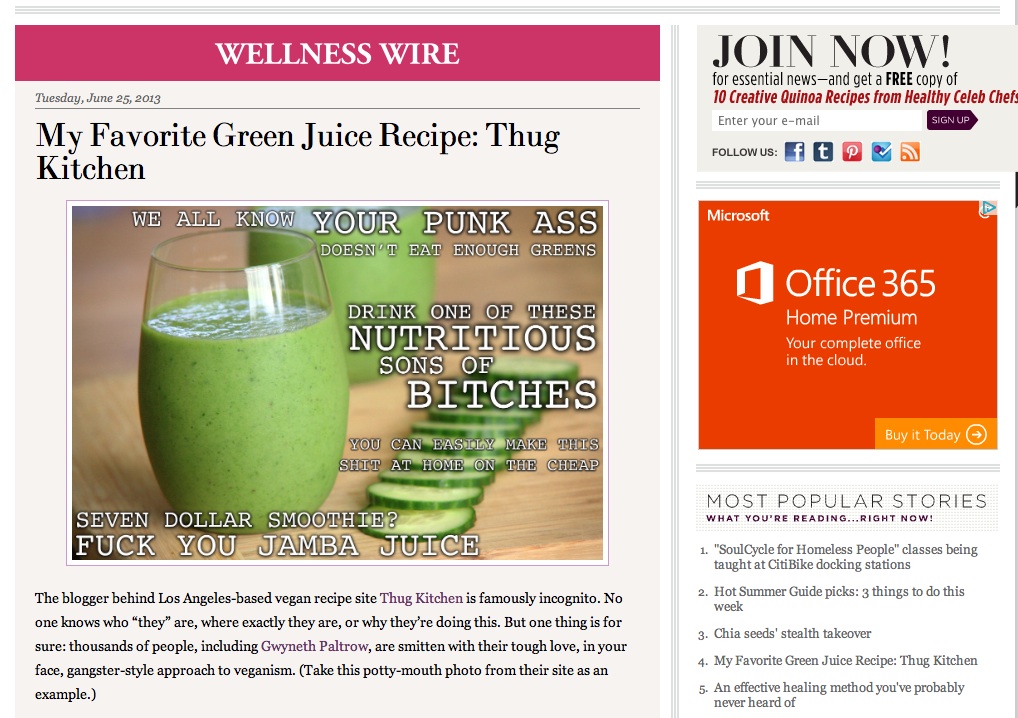 So? Why should we care that Well + Good NYC's lead post is Thug Kitchen's green juice recipe and its most popular story about "SoulCycle for Homeless People"?

What am I talking about?

Thug Kitchen is an anonymous healthy-cooking blog that implores readers to "Eat Like They Give a Fuck" by stocking their once "dirty-ass fridge" with ingredients such as tempeh, kale, avocado and fresh fruit. Processed snacks like "a pickle and ketchup sandwich" earn a big "FUCK YOU" from the L.A. blogger; Jamba Juice also gets an F-bomb for "seven dollar juices." Instead, in signature "thug" lexicon, TK provides fancy-sounding recipes such as "Peanut Tempeh Summer Rolls" along with the assurance they can be prepared "cheap as fuck."

"SOUL CYCLE CLASSES FOR HOMELESS PEOPLE!" is a (now viral) video of defiantly-paunchy comic Fabrizio Goldstein using docked CitiBikes in New York City to lead a spin class for the homeless (he claims he's sincerely trying to help the down-and-out achieve "gorgeous bodies"). It's not just any spin class Goldstein sends up when he invites his motley crew to "work it 'cause you're worth it" and to "join the cardio party." SoulCycle is super-luxury spin, offering candlelit workouts, grapefruit-scented locker rooms, and top-dollar gear emblazoned with "OBSESSED" or "ROCKSTAR." If you're really lucky, you may even be sweat upon by Katie Holmes, Alec Baldwin, or a "Real Housewife," just a few of the celebrities captured in magazines leaving SC studios in the Hamptons or Los Angeles.

When I first saw TK and Goldstein's video, I laughed, liked, and retweeted along with hundreds of thousands. Because they are hilarious. But the incredible popularity of these two cultural products -- TK's got a book deal and Gwyneth Paltrow's endorsement, and Goldstein's vid has half a million YouTube views and press from as far as London -- speaks volumes about wellness, class, and the cultural assumptions that contribute to certain health issues stubbornly remaining "poor people's problems."

I'm no scholar of American comedy, but it's clear these posts are so uproarious to so many because it seems incongruous -- even absurd -- to imagine a "thug" perusing the local greenmarket or the homeless being as "obsessed" with daily exercise as the wealthy consumers who patronize the juice bars and boutique fitness studios proliferating in affluent areas across the country. America is indeed experiencing a "wellness revolution," but it is so socioeconomically constrained that it is literally laughable to imagine it including the poor.

We know poverty and poor health are intimately intertwined. But the issue illuminated by these viral posts is that living healthfully is being increasingly understood as a luxurious perquisite, rather than as intrinsic to human wellbeing, regardless of social station. The New York Times suggested as much, noting that affluent young Manhattanites who once shelled out for pink drinks and stilettos "a la Carrie Bradshaw" now spend disposable income on "self-actualization" and wellness.

Is this a bad thing? Plenty say ABSOLUTELY, claiming that core to wellness pursuits such as yoga, holistic health, or veganism is a renunciation of our society's rampant materialism. This was certainly the rationale for many adopting these practices throughout American history: From Henry David Thoreau practicing yoga at Walden Pond in the 1840s to hippies embracing organic food in resistance to the rise of "agribusiness" in the 1960s, these transhistorical groups share in rejecting consumerism.

The philosophical arguments of these detractors of $90 yoga pants and $200 juice cleanses are indeed ideologically sound, but I am more optimistic. If it has become as chic to carry a yoga mat (perhaps one emblazoned with a designer logo) as the latest "it" bag, isn't this a good thing? If it's cooler to shell out ten dollars on green juice than a sugary cocktail, isn't this progress? Even if some spend big bucks on wellness for the "wrong reason" of putting on appearances, isn't it positive that they might improve their health in the process?

I certainly think so (full disclosure: I have worked with several such brands myself). The issue is that with the boom of luxury wellness, activities fundamental to human health such as exercise, meditation, and mindful eating have become narrowly associated with upper-class, white, consumer culture. This affinity has become so visceral that it is now "hilarious" to hear about "thugs" eating kale or to imagine poor people (gasp!) excited about a cardio workout.

And this isn't funny at all. It reminds me of an interesting and insidious obstacle to educational achievement among African Americans -- the idea that striving academically is tantamount to "acting white." This theory is contested, and this attitude far from a primary cause of our persistent racial achievement gap, but it sure doesn't help. The last thing we need is a set of cultural assumptions that defines healthy living as uniquely upper-crust. The White House has applauded yoga as America's "universal language of spiritual exercise," a claim that overlooks how culturally stratified wellness culture -- yoga one of its most vivid symbols -- has actually become.

So, once we stop laughing, what can we do?

First, we can remember that while perfumed locker rooms, chilled eucalyptus towels, and pricey technical fabrics are fun accouterments for those who can afford them, that's all they are. Then, we must insist that like education or a living wage, wellness is a social good to which all people, regardless of class or race, deserve access. Finally, it is up to those of us who know and care deeply about the transformative power of healthful living to work to expand this access as broadly as possible.