Now, Senate Majority Leader Mitch McConnell (R-Ky.) is employing a rarely used procedure to force a rushed vote on a bill to defang the CFPB.

Ok, now here's a quiz. Can you guess which member of Congress with his wife holds more Wells Fargo stock than any other, at least according to the most recently available financial disclosure forms?

Let's walk this through in more detail.

On Friday, the CFPB announced $185 million in fines and penalties against Wells Fargo for the jaw-dropping, illegal practice of opening deposit and credit card accounts for consumers who did not request them and did not know they existed. Not just a few such accounts -- 2 million of them. According to Wells Fargo, more than 5,000 employees were involved in setting up the sham accounts.

It was just introduced on Monday, and the text does not yet appear on congress.gov, the website where proposed bills are posted.

But the title tells you what you need to know. When the CFPB was created, Congress gave it budget autonomy -- it is funded by transfers from the Federal Reserve system, and its budget is set at 12 percent of Federal Reserve operating expenses. The CFPB creators built in this feature because they knew that otherwise the Big Banks could destroy the consumer bureau by stripping its funding. This isn't unique among banking regulators -- the Fed, the OCC, the FDIC and others all share this autonomy, as it has long been recognized that our cops on the financial beat should not be subject to appropriations while policing Wall Street. Since then, the Big Banks have lobbied hard to subject the CFPB to congressional appropriations, almost explicitly for the purpose of slashing its funding and stopping it from doing its job.

S. 3318 is not following the traditional pathway to the floor of the Senate. It has not yet been debated and voted on in committee. Instead, using a special procedure, Majority Leader McConnell is taking it straight the Senate floor.

Which raises the question: Senator, what's the rush?

Well, it just may be that Mitch McConnell brings a special passion to the issue, in the wake of the CFPB penalty on Wells Fargo.

In his 2015 financial disclosure form, McConnell reports between $1,000,001 and $5,000,000 in deferred compensation for his wife, Elaine Chao, from Wells Fargo. Chao, the former Secretary of Labor, serves on Wells Fargo's board of directors. 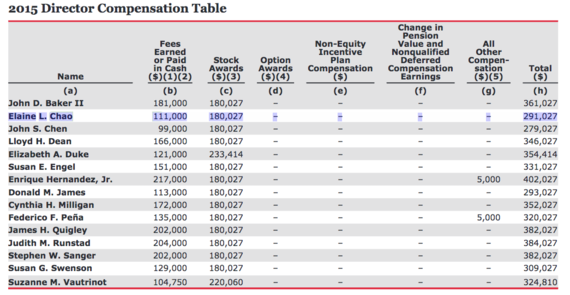 We cannot assume that McConnell is acting just to punish the CFPB for imposing a modest fine on Wells Fargo for its systematic misdeeds.

It's entirely possible -- arguably more likely -- that McConnell is acting to please his Wall Street paymasters, more than out of pique in response to the CFPB penalizing a megabank to which he's unusually close.

It's true that that can pass as a kind of ethics defense in Washington, D.C. (see the ongoing case of Rep. Roger Williams, R-Texas, also an auto dealer, who is defending himself against charges of wrongdoing related to the introduction of an amendment to benefit auto dealers on the grounds that he was not trying to benefit himself but was instead doing a favor for a lobbyist for the National Automobile Dealers Association). But it doesn't wash among Americans uncontaminated by Washington corruption.

Tell Mitch McConnell to take S3318 off the Senate floor agenda, and to recuse himself from any further matters related to the CFPB.