Wendell Castle has been working in the realm of furniture design for decades, but despite the fame he's achieved, his work hasn't ever lost its absurdist appeal. This November, the renown designer and "father of the art furniture movement" will celebrate his 80th birthday among friends in Rochester. In the meantime, the upstate artist and craftsman is being honored in a two-part show at Barry Friedman and Friedman Benda Gallery in New York, titled, "Volumes and Voids" and "A New Environment," respectively. And, on November 29, the artist will show at the Kentucky Museum of Art and Craft in Louisville. We spoke to Castle about his life, art and why you need a lot of clamps to get the job done right. It's important to note that when asked about his most prized creation, he said: "If you ask an artist, they’ll say their favorite piece is the one they’re working on now." We liked that a lot. Scroll down for images of his work.

HP: How did you develop your unusual technique?

WC: If you don’t mind a long story, I’ll tell you. I first became interested in working this way in college. The first thing that happened was when I was in junior high school. My father subscribed to Delta Craft, and I saw an article in that magazine about how to make a duck decoy. What it suggested you do is glue up pine and they provided the patterns. It was a crosssection through a duck decoy every ¾“.

Well, I never made a duck decoy, but I never forgot that. Then I remember reading an article about Leonard Baskin in college in Kansas. He had gone to a millwork company and they had glued him up this giant block of mahogany and I thought to myself, if Leonard had only read the article about the duck decoy, he would have saved himself material and trouble. But if you thought in that way, you wouldn’t need to depend on a block of wood, which limits you in how big you can get. But the shop that the sculpture studio had didn’t lend itself to woodworking. It didn’t have ways to joint material, there wasn’t enough clamps and you need a lot of clamps to work this way.

It wasn’t until I took a teaching job at Rochester to have a shop that could allow me to do [the lamination technique]. All you need is glue. The traditional woodworker’s vocabulary lends itself to stick furniture, and I wanted to have mass and volume.

HP: What's the biggest change between when you began and where we are now in the field of furniture art?

WC: There’s a huge change today. Early on in my career when I was making sculptural furniture, there weren’t any opportunities to exhibit these kinds of things. If it had any use, they didn’t want it in the fine arts exhibits. There wasn’t Design Miami –- it didn’t exist. The only place to go were the craft type exhibits. Early on, more by default than anything else, that’s where my work ended up. But when I began to do fiberglass furniture in the 60s, the craft world didn’t want that.

HP: Where did you get your sense of humor? For instance, we liked that one of your stocky floor lamps is named "Fat Albert."

WC: I don’t want to do a joke, but absurd is a good word. Almost everything [I make] is way overscaled, it’s huge. I also deal with things that look like they’ll tip over –- they won’t. The forms are happy forms. There are a lot of solids, they have volume; it makes them slightly animal-like. I like to give pieces humorous names, and I find a way to do that now and then. 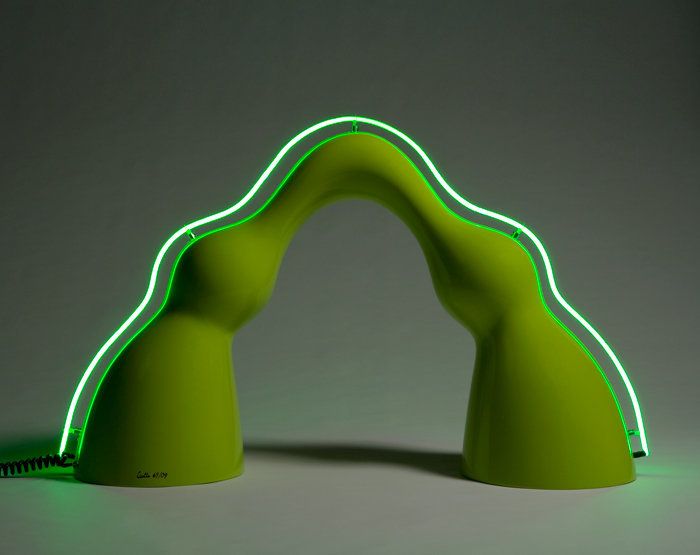