When Wendy Chandler received a back-to-school packet from her daughter’s Alabama elementary school in late August, she thought there had been a mistake. Inside the packet was a form that sought her permission to administer physical force as a form of discipline on her child. Surely this wasn't a form from 2013.

But there was no mistake. This “Corporal Punishment Parental Consent Form” was apparently sent to parents of Leeds Elementary School, asking them to specify whether or not they want corporal punishment used on their child. Forms that are not returned to the district are seen as implicit consent.

"According to Leeds City Schools Public Policy, parents or legal guardians who do not want corporal punishment to be administered to their child/children must inform the principal of the school on an annual basis,” the permission slip reads, in part.

“I really thought I was seeing things. I had to read it a few times,” Chandler said on the phone to The Huffington Post. “I checked off the ‘no’ box, but I realized a lot of kids are going to have the ‘yes’ box checked off.”

She also scrawled an impassioned note on the bottom of the form: "I can not imagine how it would ever be ok to show violence towards anyone. Hitting a child is beyond disgraceful. Anyone who could hit a child should be put in jail."

Leeds is one of many school districts in 19 states that allow school administrators to use physical force against students, according to the Center for Effective Discipline.

In the 2005 – 2006 school year, 223,190 school children in the country had physical force used against them by educators, according to the U.S. Department of Education's Office for Civil Rights. Approximately 4.5 percent of Alabama students were subjected to physical punishment that year -- the third-highest rate out of any state in the nation. And while nationwide support for corporal punishment is low, efforts to eradicate the practice seem mostly to be at a standstill, according to The New York Times.

Still, Chandler is trying to do her part to eradicate corporal punishment in her district and state. She started a Change.org petition asking President Obama and other elected officials to “STOP corporal punishment in all public schools,” and she is flooding the mailboxes of school administrators with literature about the dangers of physical discipline. She has also been in touch with fellow activists working to end corporal punishment across the country.

“I really don’t know what I’m doing, I’m just trying to change the rules,” Chandler told HuffPost. “My immediate concern is for all those other kids [whose parents checked yes on the form] because those children are my child’s future colleagues and neighbors.” 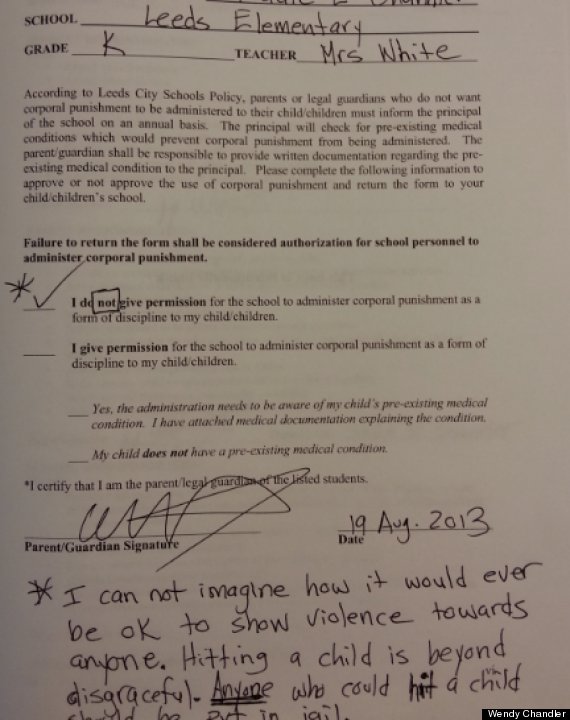