From the beginning of her campaign, Wendy Davis has exhibited an interest in "controlling" her message. Subsequent to the Dallas Morning News story about her climb out of difficult circumstances, she made the statement that she needed to speak with "tighter language." If ever there were a cue to reporters that there is a reason to get busy, this kind of statement is it. There is more than a suggestion she does not want to completely share her personal and political narrative.

If true, why not?

At a Travis County Democratic Party fundraiser the campaign banned reporters from the dining area where she was circulating with supporters and speaking to the crowd. Journalists had to watch the event on a video feed provided by one of the media outlets. Nobody gets the actual facts or the sense of an event by watching it on television instead of being present in the room. This is the kind of decision that accomplishes nothing for the campaign and only agitates journalists, who, based upon the Morning News story, are beginning to suspect Davis is withholding details that are relevant to the public. 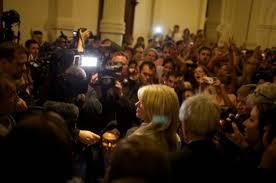 Wendy Davis and the Hallelujah Choir?

The logical response to reporters asking her questions is not to imply they are stooges or stenographers for the Abbott campaign. This is offensive to people who make their living covering the news. A considerably simpler approach is to just offer answers. Gregg Abbott's people did not prompt Wayne Slater's story. The Davis campaign did not fail by outlining her inspiring rise to this race for governor; it bungled the story by not offering details. Generalities are not sufficient for anyone who wants to be governor; especially when she is going against prevailing political sentiment of conservative Republicans who hold a majority of the electorate.

Candidates need to talk -- especially candidates who are considered the underdog. Wendy Davis ought to be running toward reporters, not away from them. Let them interview her on any and every topic they desire and then print and broadcast and post what she says from the Coastal Bend to the Franklin Mountains and from Boca Chica Beach to Dalhart. There is no other way for her to win than to be open and forthright. A candidate lacks credibility talking about running a government in a different manner when they campaign like every other person who has wanted to be governor.

Don't exercise control; exercise honesty and complete openness. Davis has big-time money in her race now and equally large interests in seeing her succeed. Those pressures have turned her campaign, in its early stages, into an operation that looks stage-managed and carefully orchestrated, which leads to mistakes. It has been credited with making pronouncements like her "origins story is now off limits," and, in an effort to change the narrative, had the candidate start talking about gun rights and fighting a state income tax.

None of the journalists bit on that tactic because they don't like being told what is off limits and they've seen the misdirection head fakes on issues before, and they don't work. The job of journalism is not to provide a hallelujah choir for candidates; it is to screen that candidate, dutifully and fairly, for the public office and the trust the candidate is seeking to acquire. Yeah, I know, there are Davis supporters who will suggest fairness has been absent but I haven't seen that. Unfairness is scheduling an interview with a reporter for one newspaper and then canceling and giving it to a reporter at another paper at the same time, which was an act of the Davis campaign.

Don't do that, senator. Reschedule so both newspapers can interview you. And talk, talk to anyone and everyone who will listen to you and most especially talk to reporters who can send your point of view far and wide across the state. It's your best chance to win. And don't be managed. People are sick of managed candidates. Give voters the hard truth. That noise on a state income tax and gun rights isn't going to fire up the Democratic base and you aren't going to get anyone to come over from the other side with it, either. It will, however, make some supporters scoff, and reporters think you aren't ready for the big game.

You owe journalists nothing, of course, but if you work this right, they can help you win for the people who see hope for this state in your story.