In anticipation of her second solo with Andrew Rafacz Gallery in Chicago, Pick Up a Knock, Wendy White answers questions about failure, American values, professional sports and decrepit gyms.

Wendy White is one of my favorite artists so I'm very happy to feature her on the blog. Just to set up the Q&A, here is an excerpt from the press release:

Furthering her concept of the Sports Moment and addressing specifically the inclination in professional soccer toward "flopping," Wendy White has created an installation of 5 singles canvas paintings and 4 large-scale inkjet printed photographs on vinyl. The painting installation is completed with wall-to-wall white Astroturf installed on the gallery's floor.

Flopping, or as Spanish-speaking countries refer to it, clavado (literally meaning nailed), is a strategy used to trick the referee into calling a foul. While other participating countries have long accepted this regular occurrence, Americans have long been reticent towards such a strategy, as it defines them as the underdog and is a sign of weakness. Our longstanding global position as one of power and winning is antithetical to the idea of failing as a means towards success. It has become so ubiquitous in the game that an aerosol pain medication, often referred to as Magic Spray, is now widely. When a player flops, trainers rush out and spray them, then they return to the game as if nothing happened.

LM: I love that you are dealing with the concept of failure in these paintings. It's a subject I've thought about a lot in relation to my own work. I especially love Werner Herzog's continuous theme of man's gargantuan effort inevitably followed by an epic fail. It reveals what might be at our core as humans, the impossibility of perfection and the value of doing it anyway. What's your take on it?

WW: I'm into the potential for either success or failure as a parallel between sports and art. Willpower is an incredible thing, and nothing to be taken lightly. The basic will to live, followed by the drive to do well at things, then to excel once momentum is created. I know it's cliché, but it's beautiful. Sports embody that, while also being emblematic of youth and desire.

LM: Your juxtapostion of the attitudes of Spanish-speaking countries and the United States in relation to "flopping", a purposeful and productive use of failure, is very telling about American values in general. Can you tell us how you arrived at the idea?

WW: Americans think of soccer as the anti-football (which it is for the most part) but also as a sport favored by liberal elites. Politicians have lobbied against it, most notably Jack Kemp, who made the famous statement that 'football is democratic capitalism, whereas soccer is a European socialist sport.' More recently, there's a great essay by Pablo Pinero Stillman about flopping and Americans' inability to accept it as strategy which was super inspiring to me while making the work for this show. Using the 1986 World Cup "Hand of God" game as the touchstone (the game in which Diego Maradona scored a goal by using his hand but the referee let it go), he makes the case that America's historical global position is one of winning. We can't relate to the underdog because we've never been one. Therefore we consider "flopping," something players use strategically, as weak or unsportsmanlike. This is changing as our global position changes, and it's fascinating to watch flopping become the poster-issue for the transition.

LM: Your preferred working methods lend themselves incredibly well to a depiction of aerosol. Mixed in with the vaporous backgrounds are various words and phrases that turn the aerosol into a thought-filled ether. Is there some alchemy going on here?

WW: I think so. I hope so. I've been into painting atmospherically for a while, and I've referenced athletics and sports psychology to a large extent in my work over the last several years. When I came across photos of soccer players engulfed in Magic Spray (the aerosol pain spray that trainers use on the field), it made sense to pursue the connection formally as well.

LM: There's a cool, sportiness to your work, much like your personal style. I remember it being a surprise when I found out your work had a lot to do with researching the New York neighborhood in which you live, the lower east side. It was the feeling of looking at a soaped up shop window (maybe one on the lower east side), but then finding a clear patch that reveals the inside. Does that make sense and can you take it from there?

WW: That makes perfect sense! I love that you got that. For a while I was thinking about dirty windows and reflections in open doors, doors that maybe were cleaned with the wrong product, showing the path of someone's hand. My neighborhood is so grimy, so used. When you think of it in terms of use, it's really exciting that a neighborhood is so well-trafficked that it can't be kept clean. It's akin to being well-loved, or, at the very least, it means that you're never alone.

LM: I'm also fascinated that, in this body of work, you are thinking of both professional sports players and the elderly working out on broken equipment, extreme sides of sports or athletics. In fact, as your press release points out, there is a link between these two sets of people. The first aerosol pain medication was invented on the very street where the broken down gym now exists. For me, your paintings actually are a depiction of the space where all of these ideas come together and coalesce or bump up against each other, your trademark three-stripe framing containing pressured ether. Is that an accurate description of your thought process? How planned out or spontaneous is your practice?

WW: I think that's accurate. My 3-stripes were meant to throw you out of the painting by way of a symbol for speed, so you have to consider the wall, the architecture, and painting as object. As for things bumping up against each other in my work, that's my thing! Nothing I make is ever completely coalesced physically. I like all the parts to have air between them, as an accurate reflection of the way ideas come together. I've never liked nailing things down and I really recoil at the academic notion that an artist should have everything figured out. You've got to let the realness of experience, the incongruence with which things come into your life, to show, at all costs.

Wendy White: Pick Up a Knock opens on September 20 at Andrew Rafacz Gallery in Chicago.

Liz Markus is an artist and writer living in New York. 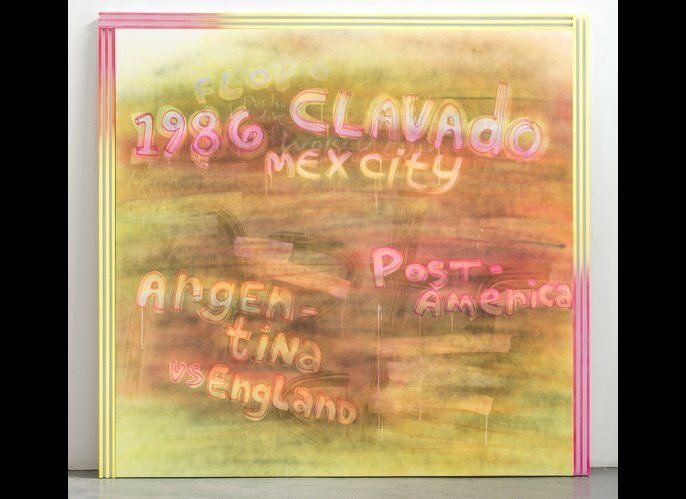