Wendy's this week rolls out its much-anticipated Pretzel Bacon Cheeseburger, while Red Robin tests a line of high-end burgers. 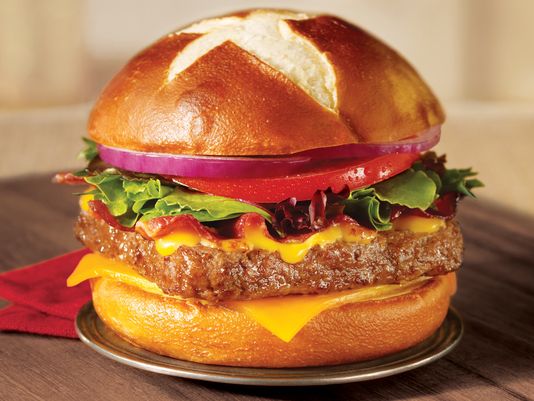 The build includes a beef patty with warm Cheddar cheese sauce, thick-sliced bacon, tomato, lettuce, red onion and smoky honey mustard on a toasted pretzel bun. Wendy's CMO Craig Bahner told USA Today that the burger is "the most anticipated new product in recent history." That's an awful lot of hyperbole for a burger to live up to. But Janney Montgomery Scott analyst Mark Kalinowski earlier reported that Wendy's execs said the Pretzel Bacon Cheeseburger had tested as well as any new product in the past two decades.

In May, Red Robin CEO Steve Carley told analysts the chain intended to test consumer acceptance of a premium-priced burger line but declined to offer details. But a Red Robin spokesperson tells BurgerBusiness.com that the test has begun and involves three burgers. All are hand-pattied Black Angus prime beef burgers with toppings such as oven-roasted tomatoes, sautéed Portobello mushrooms and house-made aïolis and sauces.

The premium burgers, served with the chain's Bottomless Steak Fries, are priced from $12.99 to $14.29. That compares with $9.99 for the recently added Berserker Burger, an LTO tied to the upcoming film, "The Wolverine." Red Robin's regular burger menu ranges in price from the $6.99 Tavern Double to the $10.79 A.1. Peppercorn Burger.

"The intent is that these will be permanent not limited editions to the menu, rounding out our barbell of burgers," Carley told analysts in May.