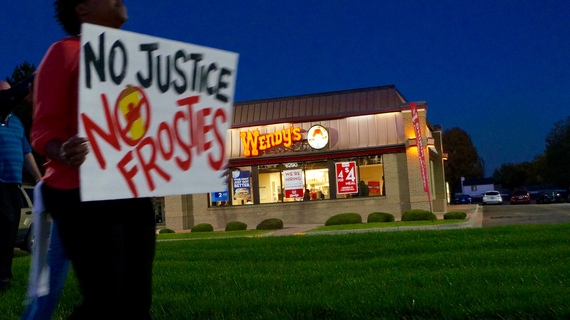 "The girls immediately told me they were scared I was going to jail. They had no concept of what the gamut of police experiences are. The police show up and take people to jail. And in this case, they showed up for their mom."

That's how Maníge Osowski described the perspective of her four and seven year old daughters after the police were called on her at a Wendy's in Arvada, Colorado on October 8, 2015.

But why were the police called in the first place? You might be surprised.

Maníge and her two girls rolled through the drive-thru not long before. Their house is being worked on right now, so eating out is common for the moment, and typically a non-event.

When they got home with their food they found something odd. Her older daughter's meal had a deck of cards neatly placed where the toy should have been.

Then, going through the deck of cards, they found something hateful. The Ace of Hearts had racial and sexist slurs--including the n-word, whore, and bitch--written in bold black letters across it. 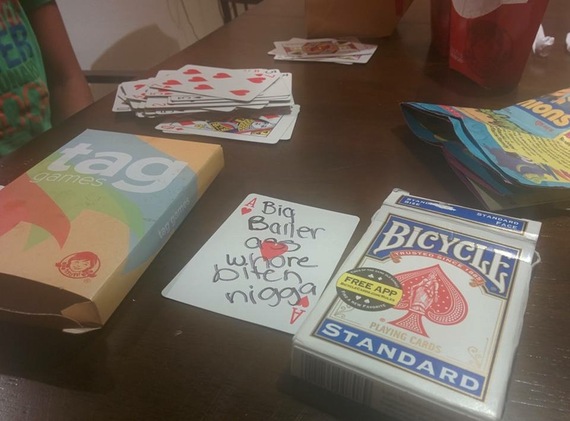 After explaining what the n-word meant to her daughters, which necessitated explaining the word's etymological roots in slavery, the family went back to Wendy's to address the situation.

When she brought the issue to the manager on duty, Anthony, a young white man, he took it pretty casually, telling the crew to stop screwing around, and telling Maníge he was sorry.

So, with the card in hand he went back to get phone numbers for the upper management. When he came back, the card was gone.

Now, though Maníge and her family certainly didn't request that card be included with their food, at this point it was their property. Justifiably, Maníge asked for it back. Anthony refused.

"I ripped it up and threw it in the trash," he told her. At which point she requested he go get it. "I'll wait," she told him.

Anthony's excuses continued. The trash had been taken to the dumpster already... he had a store to run and was too busy to go get it... it was against Wendy's policy to get anything from the dumpster... Maníge continued to request he return her property.

Keep in mind, this is a mother with her two young children, who had more than a justifiable complaint. Hardly an intimidating subject.

Nonetheless, Anthony told her to "calm down" and that she was being "irate and threatening."

Of course these labels don't come without societal baggage and attachment when they're directed at a Black woman, and having met Maníge there's little doubt in my mind that these monikers were more fueled by stereotypes and a patriarchal sense of a Black woman's place than her behavior.

When the police arrived her heart rate spiked.

"It's a really bad situation these days when Black people encounter the police. Period. Like at this point it's not a safe situation," Maníge told me during a phone interview. 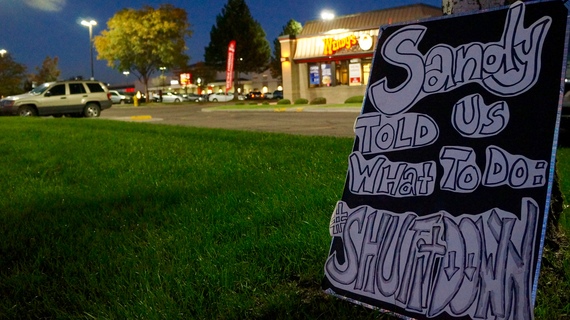 Fortunately, her interaction with the police was reasonable, though they refused to do anything to help her retrieve her property and apparently filed a report regarding suspicious activity. Whether they were referring to the card or Maníge's behavior as being suspicious is unclear.

Wendy's response has been to offer a scripted and empty apology to Maníge, while refusing to offer a direct and in-person apology and explanation to her kids.

They also fired two employees involved, without any clarification as to how they were identified or what their motivations were. It seems the two were both hourly employees, though, and it's hardly a surprise that Wendy's would sacrifice those at the bottom of the pecking order in an effort to protect those higher up.

And this, Wendy's tells Maníge, is all they can do.

Elisabeth Epps, with Robert J. Corry, Jr. and Associates, the law firm representing Maníge and her husband, Nicholas Osowski, begs to differ, and even says the law may have been violated.

"What some may seek to dismiss as an innocent prank is anything but. The vile content scrawled on the card and given to young children, Wendy's summarily destroying and refusing to return the card to Ms. Osowski, and apparent lack of interest in investigating this repugnant incident are all distressing.

"Civil litigation or pursuing criminal charges need not necessarily be the first recourse when a racist act is perpetrated, but when individuals and companies shirk their responsibilities to consumers and to the community, or when--as Wendy's did here--they say, 'there's nothing more we can do,' then we consider doing them the favor of showing them what more can be done."

Combined with media coverage from the United States to the United Kingdom, one protest outside the store already, and an ongoing social media call-in campaign, this is hardly something Wendy's is going to be able to continue to brush off. 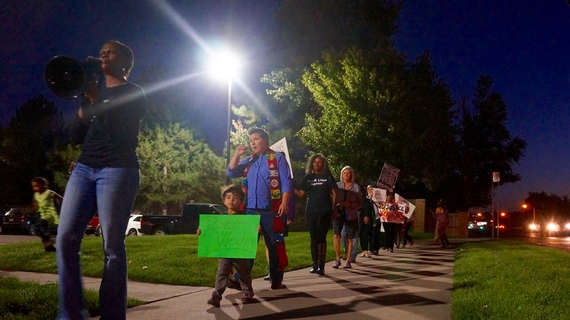 And while Wendy's continues to offer a canned response to journalists, promising this incident doesn't represent the corporation, it does highlight the company's failure to offer adequate training for its employees in racially sensitive situations.

"Whatever training the people there have failed. It failed when the employees thought it would be funny or appropriate or that they wouldn't get caught... And it failed on the level that I, the upset mother, am the 'threatening irate person' and he doesn't know how to deal with that. It failed when he called the police because he had no other skills or knowledge how to handle the situation," Maníge said.

These failures have influenced one of the demands she is making of the company--that Wendy's make available whatever anti-racist training curriculum its employees go through for public comment and suggestions.

Her other demands are simple: make amends with her children and fire Anthony, who handled the situation so poorly that he resorted to calling the police.

Because a few phone call apologies from corporate Big Wigs, the punishment being leveled entirely on the two most expendable employees, and no direct apology to the kids, simply isn't cutting it.

Maníge has repeatedly, and justifiably, said that she shouldn't be the one to decide what an appropriate response from Wendy's would look like. But as far as making amends with her kids, it might've been as simple as a face-to-face explanation and a toy.

Like any seven year old would be, her older daughter is still upset she was cheated out of the toy that should have come with her meal. Never mind what it was replaced with.

But, as Wendy's has dragged its feet, and as Ms. Epps statement above makes clear, these simple demands may be off the table soon, if they aren't already.

And if you ask me, that's a good thing. Wendy's should pay for its employees' mistakes--plural and multiple--and for its continued failure to adequately respond to some very reasonable demands.

This, I suspect, will bring up a sticking point with some readers. I've already heard a few problematic themes on Twitter discussing the incident. First, there's a tendency to minimize what happened. And second, there's a tendency to question the intent behind it. As if getting to the bottom of how the card found its way there matters more than the impact of its arrival.

(Those interested in learning more about the intersectional oppression that takes place at these crossroads should head to Gradient Lair and read Trudy's explanation of misogynoir.)

We don't get to define other people's experiences for them or determine what's traumatic for whom. Read that last sentence again white people. White men, read it a third time. And not that I had any doubts to begin with, but after speaking with Maníge about the impacts this has had on her and her family, there's no doubt the experience has been a traumatic one.

"My youngest daughter has been having a lot of accidents at school. She's been potty trained for like two years now," she told me. This is a clear indicator of emotional stress manifesting in this young child's life.

Her youngest also asked at one point, "Why does Wendy's hate Black people?" This is not a question that should come up for a four year old. But given the card her sister received with their food, it's certainly an understandable one for her to ask.

The impacts of this incident aren't limited to this one trip to Wendy's, either. Eating out anywhere has become a potentially scary event for both daughters. At another restaurant in the days following the incident they asked in line if something bad was going to happen.

As for Maníge, her appetite waned in the days that followed.

"I've got a great appetite. But like the four days after--three days--after [Wendy's] was like there's nothing more they can do, I ate like once... I was anxious and just wasn't hungry."

These are all overt physiological manifestations of trauma that are easily understandable and related to this incident. Denying this reality is nothing more than an act of erasure, and isn't a conversation I'll engage in.

As for the second problematic theme, on the question of intent... this misses the point.

Honestly, I thought this was pretty basic: Impact > Intent. If I intend to help someone, but end up doing them harm, my intention doesn't ameliorate the harm I've caused.

On top of all that, in this case it's clear the intent wasn't to help anyone, and it seems likely that it was a targeted and specific act, motivated by the race and gender of Maníge and her two daughters. Arvada, Colorado is almost 90 percent white, and less than one percent Black. The odds of a card with racial and sexist slurs ending up in a car that held two Black girls and their Black mother on accident, are slim.

But regardless of motives, the traumas inflicted on the Osowski family are real, and would remain no matter the circumstances preceding the offending Ace of Hearts arrival.

Absent a decent response from Wendy's, Maníge has still found an upside.

"If nothing else, the benefit of what happened is my Black female children are continuing to get to bear witness to the idea that they don't have to be complacent in their own oppression. There is an active way to fight against the oppression they will face in their lives and that it's perfectly appropriate to do so."

Friends, family, and strangers alike have also come together to show support, demonstrating the value and necessity of community solidarity in the face of injustice. 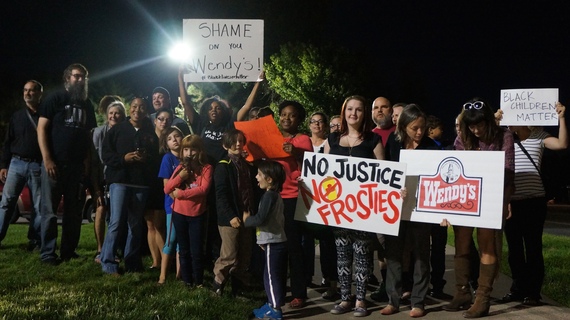 In that sense, there's a lesson for all of us here, and it's the same one Maníge has taken solace passing on to her daughters: There is something you can do. Whether it's speaking up in an uncomfortable situation, donating time, money, or other resources to a good cause, taking part in a protest or action from afar, or lending your body, voice, and energy to one in person, there's something you can do. Make sure you are.