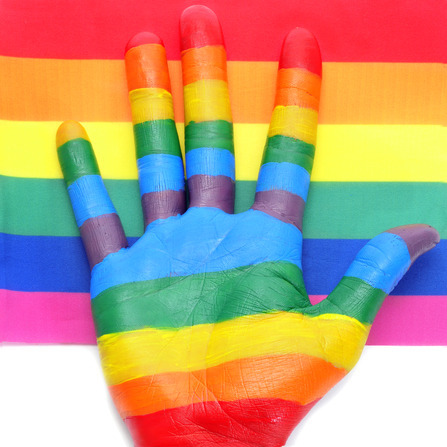 Trust me, I'm not here to insult anyone or challenge your beliefs regarding homosexuality. Instead, I'm offering you an olive branch, attempting to bridge our mutual gaps of misunderstanding, and hoping with 800 words or less I can paint a picture of our similarities, not our differences.

My 50 years of residing on this planet have helped me see that even though I've recovered from my heterosexual detour, hiding my homosexual truth, I'm not ashamed to say, "We're more alike than different." I actually believe we're all gay except for one slight difference, and I do mean all -- gays, bisexuals, transgender people, queers, heterosexuals, etc.

For many, there's one ultimate line in the sand that prevents even the slightest drop of understanding and acceptance to spill over, lest you be sent to Lucifer's playground for eternity. As a member of the alternative lifestyle team, I've also witnessed my fair share of reverse discrimination towards heterosexuals. Doesn't make it right, nor does it necessarily bridge the gap of our common divide. That's exactly why I prefer to boil down our differences to one, the only thing that truly separates us -- sexual orientation -- who we're attracted to!

Yes, it's really that simple. You're either hetero and like the opposite sex, or gay and like the same sex. Granted, I know there's bisexual, asexual, gender queer, and more, but I'm trying to make a simple correlation in order to highlight the most common threads we share in spectrum's of the sexuality rainbow. Can we do that? Just keep it simple, and for now say you're either attracted to the same sex, or the opposite sex. Outside of that, we're all gay and here are a few reasons why I know it to be true!

We've all got shame! One of the overwhelming feelings gays and lesbians experience is shame. Feeling that our lifestyle is improper, we're a disgrace to our families, and embarrassed that we're not like the majority of society. So who among you has ever felt shame? Yep, just as I thought: You're gay!

Guilt, guilt, guilt. No one is free from guilt. More often than not, gays and lesbians hide their truth, living a dual life, telling lies to cover up their truth. Wretched, deceitful, misrepresentations because we've been socialized to believe that it's not acceptable "to be that way...you know a freakish homosexual!" So, who among you has born that weight of guilt? Really, you have? Just as I thought: You're gay!

Please like me. Can you just accept and like me? Oscar Award winner Sally Fields said it best in her acceptance speech for Places In The Heart, "You like me, you really like me." That's all gays and lesbians are asking for, is simple acceptance, and to be liked. Is that too much to ask of another human being? I'm curious, how many times have you yearned to be accepted by someone? More than once I'm sure, and yes I see you shaking your head in agreement! Once again, just as I thought: You're gay!

Unconditional love does not discriminate. To love with conditions suffocates the breath out of love. For without breath there is no capacity to love. I've lived, as many other gays and lesbians have, with relationships where unconditional love comes with conditions from family and friends, in order to make others comfortable our gayness. Yet, that's not really living or having a healthy loving relationship. All anyone -- gay, straight, bisexual, transgender, queer -- desires is love. Am I right? Of course I am. Even you want to be loved, once again proving, you're gay!

Phantom Of The Opera Doesn't Own the Market on Masks. It doesn't have to be Halloween, a masquerade party, or theme dress up day at work or school. We all don our daily masks, putting our best face forward, so that no one see's our real truth. Sure, gays and lesbians wear masks to protect themselves from potential ridicule, bullying, or physical harm. But seriously, how different is that from the masks that hide spousal abuse, alcoholism, eating disorders, depression, humiliation for being single, embarrassment for declaring bankruptcy, or the despair of being unemployed. There is no difference. Masks are masks. And you're fits you like a glove just like mine fits me, and thus the reason you're gay like me!

Your closet's just as hard to come out of as mine! Battling the bulge, overcoming addiction, coming to terms with cancer, releasing the guilt of last words you wish you'd shared with a loved one who's now gone, and fighting the urge for just one more puff, are all closets. Dark closets, rank with distraught feelings of guilt, shame and low self-worth; closets identical in so many ways to the closet gays and lesbians break free from in order to be authentic and happy. So as you can see once again, you're gay!

Out of deepest respect for you, I realize, you're not truly gay unless you are. In fact, the only thing, as previously stated, that makes a person truly gay is your sexual orientation -- attraction to someone of the same sex. That being said, "Why is it then, that we've forsaken all the common threads we share, and allowed the attraction and love that someone feels for someone of the same sex, to create a monumental chasm between us as humans?"

Isn't it time to mind the gap once and for all and let the threads that bind us together lift us to higher state of human consciousness, acceptance and love?