Red, white, and blue whoopee pies are an adorably patriotic treat for this Independence Day. Bring out a platter of these at your barbecue! 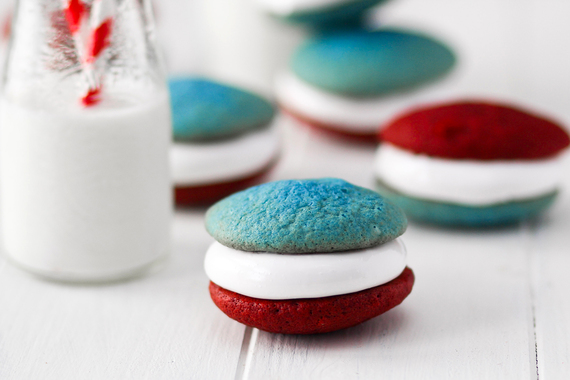 It’s hard for me to imagine that some of you live in places where you can’t buy fireworks. How is that even real life? I’ve lived in Arkansas for over 20 years now, and I’ve gotten so used to the abundance of fireworks stands that set up shop every year at around the end of June.

Most stands sell both firecrackers and fireworks. 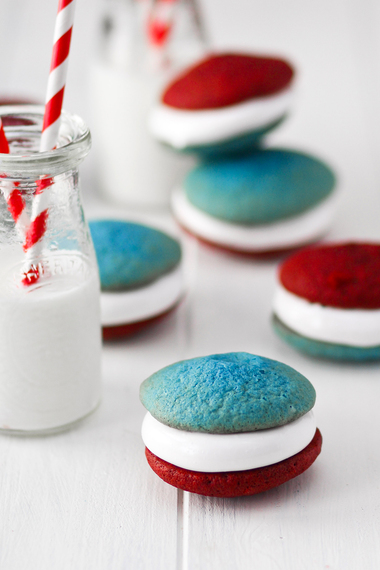 And although I love fireworks as much as the next girl, I don’t understand the point of firecrackers. They make lots of noise and smoke and scare the love right out of people, but that’s about it. No pretty sparkles, no shimmering lights, nothing. It’s redneckery at its finest. And trust me when I say that you only THINK you’ve seen rednecks until you’ve visited Arkansas around the 4th of July. Our people love nothing more than loud noises, cold cheap beer, and kiddie pools.

Which can be either awesome or terrifying, depending on the company. It could go either way in this fine state. Trust me on that. 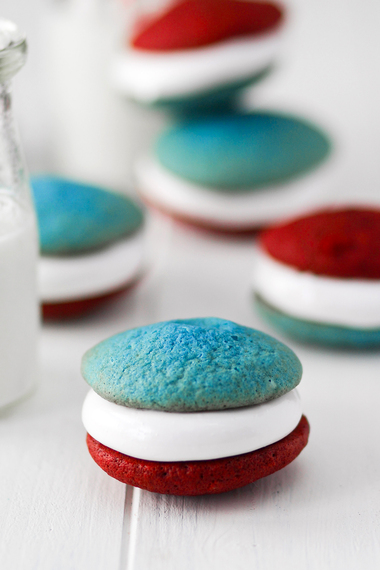 My husband and his friends actually had fireworks fights when they were younger, which is exactly what it sounds like. A bunch of rowdy boys aiming bottle rockets at each other and hoping no one loses an eye.

I can’t even make this stuff up, you guys. But this is the kind of thing that happens when you have exploding things packaged up like candy and sold on the side of the road. I mean, I guess I shouldn’t be surprised.

When it comes to celebrating the Fourth, I like to keep things a bit tamer. Swirl some sparklers around, eat a hot dog, watch the fireworks put on by the city (AKA professionals) and later indulge in an appropriately-themed treat. These red white and blue whoopee pies? As wild and crazy as I’ll get.

These red, white and blue whoopee pies use cake mix and are filled with a fluffy marshmallow frosting. They are so delicious and festive! Enjoy.

Kristan is known for her candy creations and hilarity on
Confessions of a Cookbook Queen
. We know where her true genius is, though: fanciful fanatical
cupcake
and
cake
creations!
More:
Taste cookies(╯°□°）╯︵ ┻━┻)
Newsletter Sign Up
The best recipes, kitchen tips and genius food facts
Subscribe to HuffPost’s food email.
Successfully Subscribed!
Recipes and more delivered to your inbox!