My wife Tracie and I have been playing "suburban lesbian poster family" since our oldest son was kickin' it in utero. If you go to the Wikipedia page for "lesbian" and scroll down to the "Families and politics" section, you will see him riding down San Francisco's Market Street in my belly, as if I were some kind of parade float.

Illegally married during San Francisco's Winter of Love 2004 and lawfully wed in 2008 (when same-sex marriage was legal in California, before it wasn't again), Tracie and I (and now our children) wave our "No H8" flags often. But I have a confession to make: the rally cry of the marriage equality movement -- "We're just like everyone else!" -- doesn't fit for me.

I mean, yes, just like all the other parents inhabiting all the ranch-style homes on our tree-lined street, Tracie and I want our kids to be safe, healthy, responsible, and self-loving. Like many parents, we struggle to balance our family and work responsibilities while also nurturing our marriage and individual selves. Our neighbors meet us on this common ground, and they treat us just like any other family on the block.

As much as I appreciate this level of acceptance (and I do, I truly do), I'd like to add a few caveats: 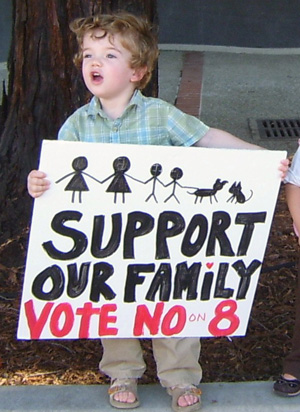 We're just like any other family, except we're bringing up baby in the crosshairs of a cultural war. LGBT families are inherently political. When we get married, it's political. When we cross the word "father" off the pediatrician's intake form and write in the word "mother," it's political. When we show up at the local taquería, we're not just another family looking for cheap eats; we are one of those families the conservative politicos are hissing about. Wherever we go, my family is, de facto, representing the Great American Lesbofam. We're civil rights activists, even when all we're asking for is a black bean burrito with no cheese.

We're just like any other family, except some people are really scared of us. Like, so scared that their fear shows up as hate. So scared they want to stick their fingers in their ears and go, "La, la, la, la, la...," and pretend we don't exist. So scared they want to erase us with laws banning the word "gay" in schools. So scared that the decision to count same-sex couples in the 2010 U.S. Census caused major political upheaval in Washington D.C. Just counting us. Go figure. 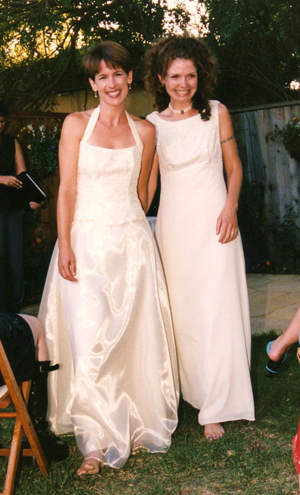 We're just like any other family, except we're raising children on top of the ever-shifting fault line of LGBT rights. We never know, from day to day, state to state, country to country, if our bonds to each other are legal. And while I feel relatively comfortable in our friendly neighborhood, in our progressive state of California (well, progressive aside from that Prop 8 debacle), my family's vulnerability becomes glaringly apparent when we travel, wandering into uncertain social waters and foreign legal territory. So, when preparing for a family vacation, on this mom's list of things to do, next to "install car seats" and "pack snacks," you'll find "research rights."

This is only a partial list of caveats. LGBT family members, add yours in the comments below.

In the marriage equality movement, we often talk about "changing the hearts and minds" of those who oppose LGBT rights. We create this change by telling personal stories that highlight our common humanity, stories that could lead your average (read: straight) Joe or Josephine to concede, "Wow, her story about falling in love with her wife sounds just like my story about falling in love with my spouse."

Great step in the right direction. But "just like" is not the end point. We need folks to understand how our lives are different, too. We need to let them know what we're up against, day to day, in this battle for equality. And we need to ask the people who have opened their hearts and minds to take the next step, to get active, joining us in the fight.