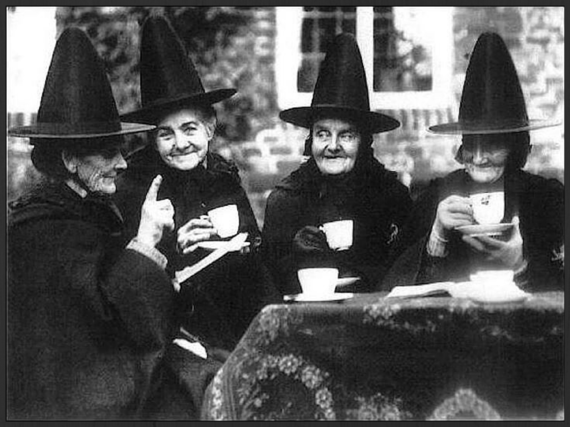 This month, many modern Pagans in the Northern Hemisphere will be celebrating Samhain (pron. sah-win) on October 31st, the same day that many of their neighbors are celebrating Halloween. Due to the coincidence of these two holidays, as well as contemporary Paganism's association with Witchcraft, this is the time of the year when Pagans tend get the most media coverage. Unfortunately, a lot of the coverage tends to be sensationalist and tends to focus on Witchcraft and Wicca. But not all Pagans are Witches or Wiccans.

Wiccans, Witches, and Pagans, Oh My!

Wicca is one form of contemporary Witchcraft, and Witchcraft is just one form of Paganism. Wicca is one "tradition" of Pagan Witchcraft, which was founded by Gerald Gardner in the 1950s. Other traditions of Pagan Witchcraft include Feri Witchcraft, an ecstatic form of Witchcraft founded by Victor Anderson in the 1950s, and Dianic Witchcraft, a feminist form of Witchcraft founded by Zsuzsanna Budapest in the 1970s. Witchcraft is just one "path" within Paganism. Other Pagan "paths" include Druidry, Shamanism, Ceremonial Magic, Reconstructionism, Polytheism, Heathenry, Animism, and others. There are also Pagans who do not follow any of these paths, for whom "Paganism" is its own path. These Pagans are sometimes called "eclectic Pagans" or "Neo-Pagans" to distinguish them from more traditional or retrospective forms of Paganism.

Neo-Paganism differs from Wicca in a number of ways. Unlike Wicca, which arose out of post-war England and was heavily influenced by Western esotericism, Neo-Paganism is more a product of the 1960s American Counterculture and the feminist and environmentalist movements of the 1970s. Dennis Carpenter describes Neo-Paganism as a "synthesis of historical inspiration and present-day creativity". It is difficult to generalize about Neo-Pagans. There is no central Neo-Pagan authority, and Neo-Pagans tend to be suspicious of institutions generally. The majority of Neo-Pagans in U.S. practice alone ("solitaries") and do not belong to any Pagan group. In spite of this, the website Adherents.com reports that "Neo-Pagans as a whole have a remarkably cohesive, identifiable culture and generally shared value set, even more so than religions such as Christianity, Islam or Judaism when taken as a whole." Below are some of the values which are common among Neo-Pagans.

Neo-Paganism is a life-affirming religion. Neo-Pagans seek to live life as an end in itself. For them, the meaning of life is not to be found in another world or a future existence. This world is neither "fallen" nor a prison from which we must escape. Neo-Pagans strive to live in the "here and now".

Neo-Paganism is a nature religion. Neo-Pagans perceive nature as both sacred and interconnected. Nature, including its human and other-than-human inhabitants, has intrinsic value to the Neo-Pagan. Neo-Pagans perceive that we are immersed in a vast web of life which is our true community. Many Neo-Pagans are active in environmentalism.

3. Re-Enchanting of the World

Neo-Pagans feel that human beings have become tragically disconnected from the natural world and our natural selves as a result of the descralization of nature. The result of this disconnection is social alienation and injustice, patriarchalism, personal anomie and neurosis, and environmental desecration. Neo-Pagan seek to heal this rift by reconnecting with the sacred dimension of nature. This is sometimes referred to as "re-enchanting the world".

Many Neo-Pagans are pantheistic. They experience divinity not as something outside of us, but as something we are a part of. Neo-Pagans perceive a "deeper" (as opposed to a "higher") power, which is present in nature, in our own selves, and in the process of our lives. They seek to live in accordance with this deeper, sacred dimension.

Neo-Pagans perceive a divinity which both manifests through and transcends gender. To the extent that they acknowledge a male aspect of divinity, Neo-Pagans also acknowledge a female aspect, often called simply "the Goddess". Neo-Pagan women exercise religious power equally with men.

Neo-Pagans persceive the essential nature of the cosmos -- including divinity, the world, and ourselves -- to be change. They also perceive that the changing cosmos follows a pattern, one that is cyclical, represented visually by a circle or spiral. This is reflected in the changing of the seasons, the movement of the sun, the changing face of the moon, the human life cycle, and in the ebb and flow of our lives.

Neo-Pagans have a sophisticated understanding of the importance and function of myth in human life, and of the nature of the gods of mythology. They may worship or honor one or more gods from ancient myth or even modern gods of their own imaginations. Often, these gods take the form of psychological archetypes like the Dying and Rising God, the Horned God, or the Triple Moon Goddess. Some Neo-Pagans honor an immanent Great Goddess of nature or the earth, sometimes called "Gaia", and a male god who complements this Great Goddess. Neo-Pagans have different beliefs about nature of the gods. For some, the gods are literal beings, while for other they are Jungian archetypes or metaphors for natural processes and human experiences.

Neo-Pagans strive to attune themselves to the rhythms of nature and to root themselves in the present place and time. One way they do this is by celebrating the turning of the seasons and the solar solstices and equinoxes, called the "Wheel of the Year". Samhain, which will be celebrated on October 31st, falls approximately half way between the autumn equinox and the winter solstice. Neo-Pagans create their own rituals in order to relate their experiences and their lives to the larger cycle of life and to re-enchant the world.

Neo-Pagans are eclectic and non-traditional. They seek life-affirming symbols and teachings from both modern and ancient religious traditions to enhance their religious practice. Neo-Pagans honor the essential diversity of nature and life, and eschew sexism, racism, homophobia, and other forms of intolerance. Neo-Pagans are pluralists and tolerant of other's beliefs, but they are also selective in choosing what works for them personally. Neo-Pagans reject all claims to absolute truth and oppose all those who seek to deny the freedom of others to believe or practice their religion as they will.

Neo-Pagans hold these things to be sacred: all life, the earth, nature, our bodies, and all living beings. They experience the body and the earth as sources of wisdom to which we should listen. Neo-Pagans experience embodied life as good and believe that the sensual aspects of life should be enjoyed. They do not attach guilt or shame to sexual desire or consensual sexual activity. At the same time, they condemn vulgar commercialization of sexuality and the objectification of women's bodies.