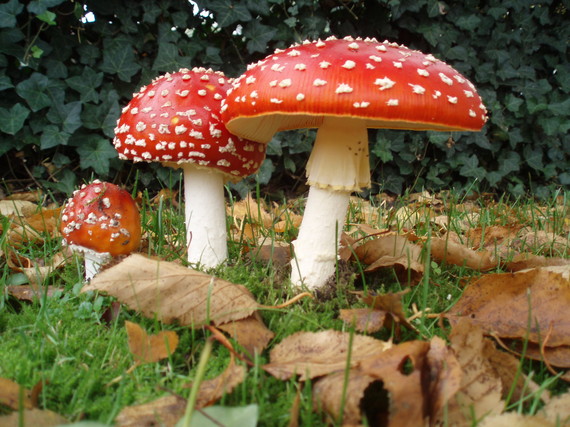 There are few things that make me smack my head more than the idea that Adam and Eve's bite into an apple caused all of the decay and disease that exists in the world. I've written before that I believe the "death" that came to Adam and Eve (who are allegorical characters representing the human race), which Paul describes in Romans 5:12-13, is the death of innocence, not physical death as such. If you're going to say that physical death didn't happen until after the apple bite, then what you're saying is that mushrooms and bacteria and viruses weren't created by God until after Eden, which would mean that there wasn't a real ecosystem and biological existence, as such is dependent on sin.

See the problem is that every creature in our ecosystem depends upon the harmonic balance created by the cycle of life and death, growth and decay among its parts. Mushrooms can't exist unless there's something dead for them to feed on. And they're not the only creatures dependent upon the constant mishmash of death and life in something like a forest. Imagine if there were no death in the forest. If that were the case, the trees would saturate the space completely and deplete the soil of all of its nutrients. The death of trees is what gives the soil its nutrients, particularly when it's caused by lightning and small forest fires because the ashes are rich in nitrogen.

What happened when humanity lost its innocence, as represented allegorically in the Eden story, is not that biological existence began, but that the harmonic balance of the food chain started to be skewed. When humans weren't content to run around naked in the jungle, grabbing fruits and nuts to eat, we cut down trees to clear space for agricultural land. Then we cut down more trees for firewood to cook with. We hunted species out of existence. We turned the Mesopotamian fertile crescent into a desert. The cost of human self-consciousness to the ecosystem has been enormous, and creation has responded wrathfully to the ways that we've abused it (climate change isn't God's wrath against the homosexuals and abortionists; it is God's wrath against pollution).

Creation is "fallen" not because the plants or animals have become "sinful," but because humanity looks at the world as a plantation of commodities instead of a garden of sacraments. I think the reason some people cling to the idea that the biological processes causing death and decay are the result of humanity's sin is in order to protect God from being implicated when friends and loved ones get cancer or other illnesses. It's a cheap and superficial cop-out. God created a world where life and growth depend upon death and decay. He isn't happy when any of us gets cancer, and sometimes He heals people of it miraculously. I don't know why some people get healed and others don't. But I will praise God when it happens.

What's despicably cruel is when Christians try to say that people who have bodies created differently than the norm of humanity are the product of "fallen nature." The vast majority of people are born completely heterosexual and completely one gender or the other. The minority born otherwise are a mystery. Sometimes people are born with both reproductive organs. Other times they are born with unique hormonal combinations that make them "boyish" girls or "girlish" boys. Sometimes they're wired with attraction to people who have the same reproductive organs that they have. People born outside of the norm go through tremendous suffering when they are judged moralistically for not fitting into the boxes that most of us fit into. Adam and Eve's sin didn't create them. God did, for a beautiful purpose.

For the creation waits with eager longing for the revealing of the children of God; for the creation was subjected to futility, not of its own will but by the will of the one who subjected it, in hope that the creation itself will be set free from its bondage to decay and will obtain the freedom of the glory of the children of God. We know that the whole creation has been groaning in labor pains until now; and not only the creation, but we ourselves, who have the first fruits of the Spirit, groan inwardly while we wait for adoption, the redemption of our bodies.

I think it's dishonest to pretend that this passage has a clear and straightforward meaning. What do "subjected to futility" or "bondage to decay" really mean? Was God the "one who subjected" creation to futility, and what was His purpose in doing so? I don't know what the resurrection will look like. I'm not going to speculate about how an eternity without death is structured. I just know that Adam and Eve's curse is undone by Jesus. The world becomes a garden again when we stop seeing ourselves as self-reliant gods and accept our nature as dependent, wonderfully blessed creatures. Will there be mushrooms in heaven? I hope so, because I happen to like the taste of Portobello.