On a Tuesday evening in Paris, I stepped into the KFC-esque "Chicken Spot" in search of french fries for twelve hungry travelers. My money belt contained a single bill. After staring at the menu overhead for a few minutes, I asked the man behind the counter, "How many large frites can I get for 20€?"

"So you can have eight of them," he said slowly, clearly wondering why my American school hadn't bothered to teach simple division.

The ensuing discussion of tax and tip left the Frenchman floored. "Wait. You mean there's a number, listed on the menu." I nodded. "Then the government adds more to it. And you also give money to the person working? How do you know how much a thing costs? Why can they not put the total on the menu?"

Needing to race back to my AirBNB before the fries cooled, I couldn't get into the full story. Like how ten years ago, credit card machines printed receipts with just a number and a signature line; only when dining at a restaurant would spaces for tip and total appear. Elsewhere a jar might have sat on the counter, unobtrusively begging for change, but that was it.

Now I'm electronically prompted to tip at the local ice cream shop's takeout window and the movie theater concession stand. Even a dry cleaner once got in on the act.

Technology, it would seem, is to blame. Businesses increasingly use suped-up iPads to scan credit cards. A representative of Square, a payment platform that powers this type of system, says they allow merchants complete flexibility in choosing whether to ask customers for a tip and how much to suggest. Standard credit card machines now appear to do the same, allowing vendors not only to insert the additional, beseeching tip and total lines, but also to list dollar amounts keyed to percentages like "18% = $7.74."

As lovely as it would be if this new tech put money in the pockets of blue collar workers, the more likely scenario is that managers jump at the chance to shift a chunk of employee compensation onto customers' shoulders, or simply to reduce it (since the minimum wage is lower for "tipped employees").

Regardless of the motivation, almost every time I use my credit card I'm offered the option to tack on one of three percentages, generally 15, 20, or 25. In order to decline, I must click a separate button stating "No Tip," under the watchful eye of the cashier. A cab console recently presented this stingy option as the only alternative to 20, 25, and 30 percent.

I responded to these requests aggressively at first, writing "takeout" on the tip line by way of both explanation and complaint. As the practice became increasingly common, however, my initial incredulity gave way to grudging acceptance.

In The Distraction Addiction, Alex Soojung-Kim Pang decries the way in which we shape our lives to the capacity of new technology, rather than putting devices in service of our lives. Allowing enhanced credit processing capability to change our tipping behavior is one such modern incarnation of the cart leading the horse.

That's not to say tipping custom used to be transparent. Hotels, for example, have always confounded. Does one tip the concierge? The front desk? I thought I could save bellhops the trouble and myself the quandary by carrying my own bags. "I've got it!," I'd smile, adding with my eyes, "don't worry, I'm not one of those jerks who needs to be waited on." Then the author of Heads in Beds quoted a bellman saying, "Let them tell me to my face they can take their own luggage and my baby girl has to starve." Whoops.

For a while I didn't tip when the task a person completed overlapped with that for which I'd already paid. Once again I was schooled, this time by Sarah Silverman. Her autobiography, Bedwetter, tells the story of a lunch with her "bad guy" former agent that concludes: "When we left the restaurant, . . . he realized he had no cash and asked me for money for the valet. I gave him enough for the fee and a tip--but he gave me the extra money back saying, 'Don't tip, it's figured into the fee.' Some people just never disappoint. I waited for him to leave and gave the valet his tip along with mine." Oops, I did it again.

Afraid to offend, I now tip almost everyone, but I'm still unsure how much to give. Even in restaurants there are great unknowns. Do I tip on the base amount or the post-tax figure? Some folks I know only tip on food, not alcohol. Should my tip be considered payment for a task performed or an assessment of service quality? By shorting a terrible waiter do I inadvertently penalize the efficient kitchen staff or vice versa?

Food delivery is worse. A percentage of my dinner's cost bears no relation to the work performed. The driver gets $10 for a ten-minute job if I feel like Thai from the fancy place, but only $3 if I go with the pizza joint next door? That can't be right. A friend who lives in Seattle tips based on the weather, more if it's raining. Another uses her own hunger level to estimate the subjective value of the service.

Munchery, a startup that delivers meals prepared in a commercial kitchen with no storefront, charges a delivery fee and lists "Driver Gratuity (optional)," offering the options "None, $1, $3, $5, and Other." 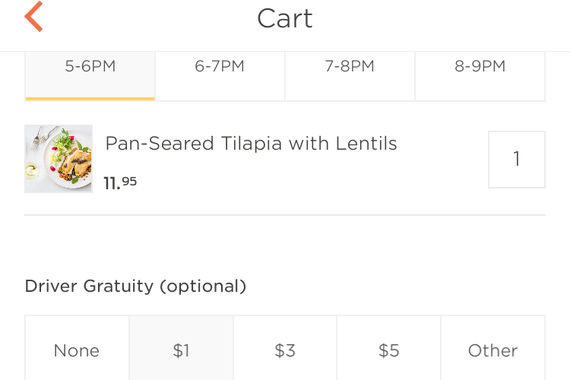 In Thinking, Fast and Slow, Daniel Kahneman describes the concept of "anchoring" as follows: "when people consider a particular value for an unknown quantity before estimating that quantity, . . . the estimates stay close to the number that people considered--hence the image of an anchor."

Vendors rely upon this cognitive bias. If you don't have a set tipping policy--like "25 percent if the kids are there, 20 otherwise"--the numbers listed will influence, and generally inflate, the amount you tip.

This little trick is really just a fine-tuning of the meta-anchoring happening when businesses provide a line (or require a click) to select an amount in the first place. With the range of available numbers reaching to infinity, asking us to choose one already drops the anchor far from zero.

Sprig, a direct competitor of Munchery, includes the cost of a living wage in the prices of its meals and delivery fees, and thus doesn't allow tipping. The charge is higher, but what you see is what you get. A few restaurants across the country, mostly high-end ones, have begun to take the same approach.

With these businesses, you don't have to tweet Sarah Silverman to find out what current convention requires. You can just look at the thing offered and decide whether its value is greater or less than the number listed. Basic math. No mind games. My Parisian friend would approve. I know I do.