Funny you should ask, everyone; I was indeed made fun of as a kid for having two moms!

However, I was only totally caught off-guard once by teasing and that was the first time it happened, the day I started school in West Hartford, CT. I joined the first grade mid-year as a transplant from Manhattan. Back then, I was maintaining my Manhattan-dwelling habit of introducing myself as, "I'm Emma. I have two moms."

I had just thusly introduced myself to Ms. Leonardi's class on that first day. I was the new kid and it was a real heady buzz for me. My outfit was fabulous: a 1992 Gap ad come to life with white small polka dots on navy leggings beneath a red sailor shirt, a navy blue kerchief sailor-knotted around my neck. White leather Keds completed the look, plus a potbelly and bangs. Though I couldn't read yet, there was no doubt that when I could, I would be good at it.

After my introduction, the kids dispersed to pick out books. I still couldn't read, so I hung back... and out of the corner of my eye, I met my first skeptic. He was a boy (already bad news). He sat with his arms crossed, his back against a shelf of books about magic, spelling, and the Golden Rule.

"Did half of you come out of one mom and the other half come out the other?" And then he laughed.

And I felt sick. Who was this little provincial shit who, using no science, logic, or respect, took my openness and flung it back at me? In retrospect, he was six-years-old and West Hartford was a pretty sophisticated town. In not retrospect, I was mad and hurt and it was my first day in a new school where all the kids read better, but seemed to have about 10 percent of the emotional intelligence of my friends back home. 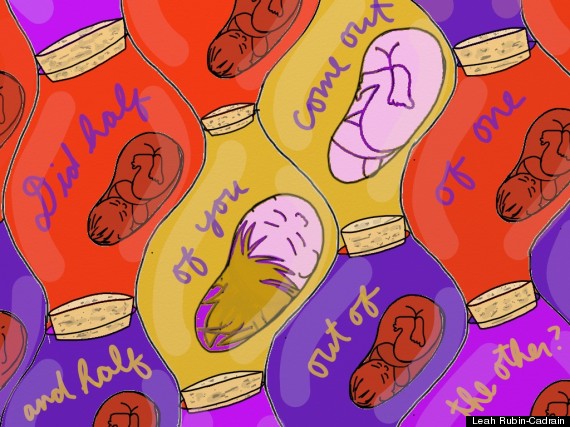 The idea of myself halved and grotesquely sliding out of two different people was discordant with my actual birth story, described to me as an almost mythological eight-year soul search. When my parents did conceive me through an anonymous sperm donor, it was in spite of public opinion, with a dearth of role models, and without a father figure. This was radical to my parents, who grew up with fathers.

I stood looking quizzically at this boy, like the young Buddha encountering the real world disguised as a peasant. Obviously this boy didn't know whom he was addressing. I had come from a land of take-out and chopsticks, Caribbean nannies, and gay pride marches. My first words had been "mommy" and "moo-shu" as in "moo-shu vegetables." This child was not of my people.

From that day on, I didn't wait for teasing to come at me. I went out scouring the playground for new cases: Who else was confused? Let him show himself to me.

Who else thought gay people were bad and did nothing but have sex all the time (a frequent misconception)?

Who else didn't know where babies came from? (Those people I left to wallow, but it was good to have a handle on who they were.)

I was never worn out by this higher calling. I also, within a few months of starting school, began sitting on the bench under a maple tree at recess so the other children could come and tell me their problems and I could give advice. Sometimes there was a bit of a wait so the kid might have to play on the monkey bars for a bit till it was time for her session.

It was very natural for me to lead, to boss, to educate, to amuse, to dispel, to charm, to cajole, to gather allies, and to listen to other little people. Teasing, which I think is the great fear for future gay parents, ignited those passions in me and prompted me to hone those skills. They don't teach that in college. Maybe I'd be president by now if I'd been teased a little more.

Read more about growing up and being a grown-up with two moms at http://two-and-a-half-women.tumblr.com.