In the movies werewolves enjoy much of the same mystique and magnetism as their archenemy... the vampire. Both are seductive bad boys, although romantic encounters with the prior are portrayed as carnal and wild, as opposed to the mesmerizing sophistication of vampiric liaisons. It is no wonder young heroines have a hard time making up their minds. Lucky for the parents of teenage girls, werewolves are only mythological creatures brewed up in the imaginations of creative storytellers. At least that was what I thought until I flipped through the pages of Linda Godfrey's new book, Real Wolfmen: True Encounters in Modern America.

Godfrey had not thought much of the issue either until late 1991. As a writer for a newspaper in Walworth County, Wisconsin, she had decided to write a story on local reports they had received of a large hairy animal described as a dog that walked on its hind legs. Her story sparked a nationwide fascination with what was being dubbed the "Beast of Bray Road." The events apparently not only pique the interest of Godfrey, but of people throughout the United States. 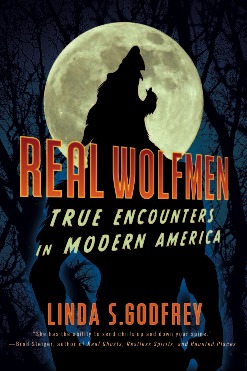 Since then Godfrey told me in an interview via email that she has received over 100 similar reports, and like the witnesses in Wisconsin, she believes many of them to be credible. She points out in her book that the History Channel's MonsterQuest television show put several witnesses with similar accounts to the test using a polygraph. They all passed.

As for the nature of these creatures, she has not found that the reports fit the traditional ideas of werewolves that we see in films. Godfrey wrote me:

I do not believe the upright canines are shapeshifting humans, but rather: 1. Some type of wolf or wolf/dog that has adapted to walk bipedally when it wants. 2. As explained to me by some Native Americans, a "spirit" creature that can move between worlds (dimensions?) but is fully corporeal when here with us.

Godfrey's book does not only focus on cases here in America; she also gives a history of the phenomena stemming back for centuries throughout the world. She notes that many of the historic reports are similar to those she has collected in the United States. They also often consist of an upright canid that runs off into the night on two legs. Fortunately, wolfman reports globally usually result in the creature trying to elude detection as opposed to vicious attacks.

Godfrey says it is important that people are informed of these credible reports so they can feel comfortable to report their own sightings. Although she concedes that, "Many people report their sightings to local authorities but are often disbelieved or ridiculed I don't know of any law enforcement or conservation entity that recognizes these creatures as existing." Still she believes the more reports that are received; the more we can begin to understand the nature of the phenomena.

However, if you are seeking to have your encounter, Godfrey advises:

"These creatures are very elusive, and seem to travel. Therefore you shouldn't expect to see one for sure if you travel to a sightings area, especially if the sighting occurred years ago. But keep a camera close at hand -- you simply never know where these beasts will turn up next!"

It is hard to believe that such a creature could exist. However, the witness accounts in Real Wolfmen are often very compelling. Pick up a copy and see for yourself. The book is hitting the shelves this week, and can be purchased on Amazon.com.