A Canadian farmer has lost at least 250 cows in the past 10 years. While the government has charged him and says he failed to feed them, the farmer claims the alien defense.

Werner Bock has posted plenty of YouTube videos in recent years detailing his cattle's malnourished appearance, sunken features and hair loss. He declares that his cows were the victims of "death rays," some form of alien weapon that's been covered up by the Royal Canadian Mounted Police.

"At least 250 head of cattle have died from what we call a death beam," Bock said on camera in May of last year. "Where the atmospheric air is manipulated into a death beam, focused on the noses of the animals."

The animals breath in the death beam and slowly die, the eastern New Brunswick farmer claims. 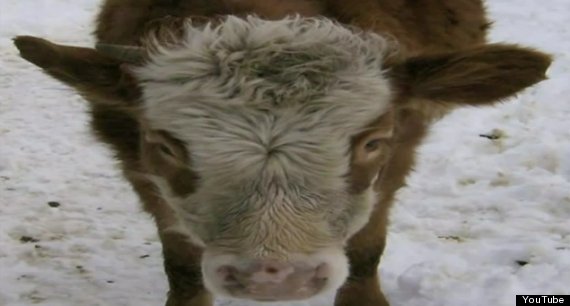 That little dot on the end of the cow's nose? A death ray did it.

But Canadian authorities are crying foul. Bock was slapped with charges Monday for not giving his cows adequate medical attention, CBC News reported.

In a pre-trial meeting on Monday, Bock wanted to subpoena three veterinarians and three officers to testify in his favor. But the judge noted that those individuals, if they were relevant to the case, would be there to testify against him.

Bock wanted to call a vet who apparently found no evidence of burns on his cows. He also wanted to call an officer who he says assured him there were no aliens flying in the airspace above his farm.

His trial will begin in September.