A 79-year-old former military man has devoted his life to the beautiful but dangerous wolves that inhabit his wolf park in Germany.

In order to better learn about the wolves, Werner Freund has tried to become one of them, waking among them and feeding them raw meat from the ground, according to the Daily Mail.

Reuters reports that Freund has been running his 25-acre Wolfspark Werner Freund, located in the German province of Saarland, since 1972. Over the past four decades, he has raised close to 70 wolves.

Often the wolves come to him as cubs by way of zoos or animal parks, per Reuters.

Currently, Freund has 29 wolves living among him; they are divide into six packs. The National Geographic notes that wolves observe a rigid hierarchical structure. In order to assert his dominance over the animals, Freund uses feeding time to act the Alpha by getting to the meat first, according to the Daily Mail.

“To earn their respect, one must become a wolf," Freund told the Telegraph. "And that is what I am to them –- their leader."

Wolves, the largest member of the dog family, have long had an "adversarial history" with their human neighbors, according to National Geographic, and have long been considered a villain of the animal kingdom, although they rarely attack humans.

Freund remarked to the Telegraph that he believes wolves have drawn an unfairly short straw.

“Fairy tales, that’s what gave them a bad name,” he said. “Red Riding Hood and all that. These are beautiful animals and the person who says they shouldn’t be in the wild might as well not care about what happens to the elephant on the plains of Africa. We are all enriched by their presence, by the simple fact that they are among us."

While Freund's property stands as a sanctuary for his group, Germans hunted their native wolves almost to extinction in the early 20th century, according to Germany's Spiegel Online. In November, reports of a wolf pack sighted in an area close to the capital city of Berlin was celebrated by conservationists.

On the other hand, governments in some countries -- including Canada, Russia, Norway and Scandinavia -- have authorized intensive wolf hunts to keep down, and in some cases all but eliminate, the impressive predator, according to the Guardian. 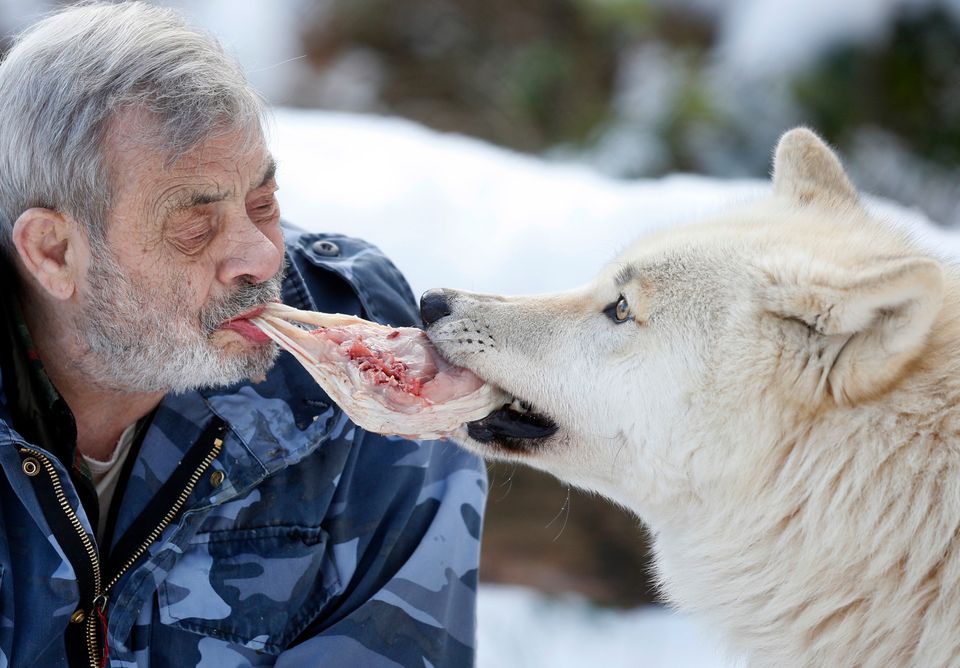 1 / 8
Werner Freund Wolf Man
Wolf researcher Werner Freund feeds Arctic wolves with meat with his mouth in an enclosure at Wolfspark Werner Freund, in Merzig in the German province of Saarland January 24, 2013. Freund, 79, a former German paratrooper, established the wolf sanctuary in 1972 and has raised more than 70 animals over the last 40 years. The wolves, acquired as cubs from zoos or animal parks, were mostly hand-reared. Spread over 25 acres, Wolfspark is currently home to 29 wolves forming six packs from European, Siberian, Canadian, Artic and Mongolian regions. Werner has to behave as the wolf alpha male of the pack to earn the other wolves respect and to be accepted. (Lisi Niesner, Reuters)
Lisi Niesner, Reuters