Wes Anderson bingo. That's all you really need to know about this one, which takes a standard bingo card and re-imagines it as a font of Wes Anderson ticks and references.

Everything from Anderson's go-to Futura typeface to dated audio equipment gets referenced on the card, with the director himself occupying the free space in the middle. Naturally, Bill Murray -- who has appeared in all but one of Anderson's films -- gets a space as well.

"As soon as we started working together, I would say something to him and he would respond with something that made me think, 'Not only does he understand what I'm saying, he seems to like it and has expanded on it,'" Anderson told HuffPost Entertainment about working with Murray. "In 'Rushmore,' there's a scene where he has a conversation with the teacher, and he's supposed to leave. We did a couple of takes and I said to him, 'What if you, rather than just walking away, you walk away and then you sprint away.' It was a weird thing. And he said, 'You mean to have an excuse for my heart beating so fast? Yeah, okay.' And I was like, 'To have an excuse for my heart beating so fast? Wow, what a way to say it.' He made it real; it was funny, but he made it real. I've always felt like I've enjoyed that rapport so much."

Check out the Wes Anderson bingo card below via Slate.com. And head over there to play with your friends -- the thing's interactive! Anderson's latest, "Moonrise Kingdom," is out now in theaters. 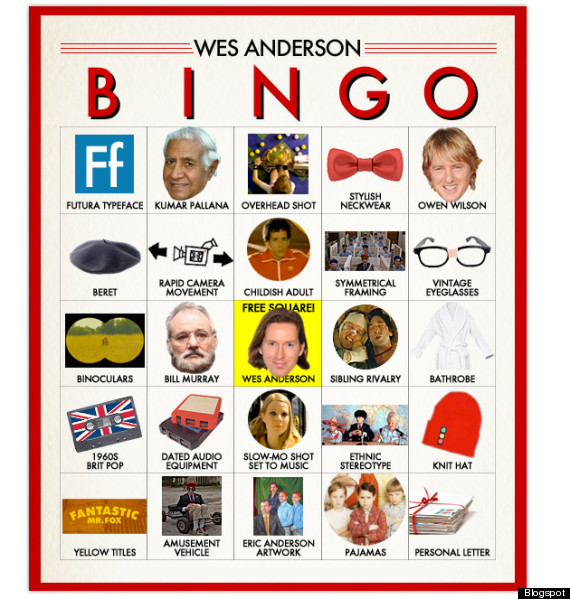