In recent weeks, millions of North Pacific krill, a species of tiny crustacean that makes up a crucial part of the ocean's food chain, have washed up along the shores of Northern California and Oregon--the largest die-off that's ever recorded in the region.

The majority of the krill washed ashore on beaches across a 250-mile stretch from Newport, Ore. to McKinleyville, Calif. from June 16 to 18. Biologist David Anderson of the Redwood National and State Parks told the Associated Press that, during that time, so many krill were beached on the park's shore that it formed a mile-long pink band.

According to Joe Tyburczy, a marine ecologist leading the investigation into the die-off with the California Sea Grant Extension, the culprit for the widespread stranding could be that the animals were engaged in a large mating swarm that was slammed into the coastline by a strong shift in wind direction.

Tyburczy told the Santa Rosa Press Democrat that this year's larger-than-normal krill population and particularly low levels of oxygen in the water off the West Coast may have contributed to an unusually large number of krill swimming just below the surface, a position that could make them vulnerable to being pushed onto the shore by strong winds.

A survey of the dead krill in both states found most of the crustaceans to be fertilized females, lending credence to the idea that they washed ashore following a mating swarm.

Bill Peterson, an oceanographer with the National Oceanic and Atmospheric Administration, explained to The World that the shrimp-like creatures serve as one of the primary food sources for a wide array of marine life from Chinook Salmon to Blue Whales.

"This is the main food for fish offshore," said Peterson.

PHOTO GALLERY
Problems Of The Ocean 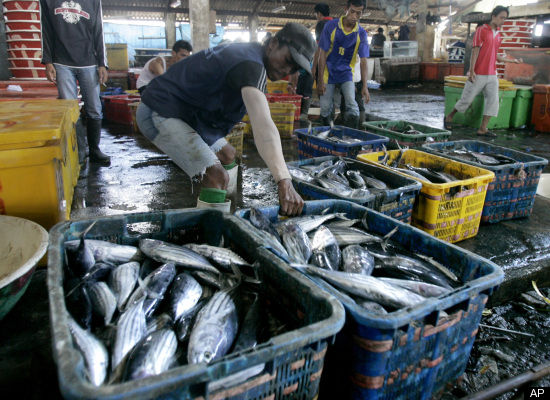 1 / 9
Overfishing
Many marine scientists <a href="http://www.oceanconservancy.org/site/PageServer?pagename=issues_overfishing" target="_hplink">consider</a> overfishing to be the worst impact humans are having on the oceans. The Food and Agriculture Organization <a href="http://www.un.org/events/tenstories/06/story.asp?storyID=800" target="_hplink">estimates</a> that over 70% of the world’s fish species have been entirely exploited or depleted. By capturing fish faster than they can reproduce, we are harming entire ecosystems that interact with those species, from the food they eat to the predators that eat them. These losses make the ecosystems more <a href="http://explorations.ucsd.edu/biodiversity/" target="_hplink">vulnerable</a> to other disturbances, such as pollution. A complete overhaul of fishing policies, requiring global cooperation, is needed to achieve a sustainable system.
AP