Across the Nile from Luxor is a valley with more ancient treasures than any place I've seen. I spent a long day visiting tombs and temples to find the best places for my upcoming TV episodes on Egypt. With the help of an excellent guide, I enjoyed Egyptian art and history more than I ever have. Here's a bit of what I learned:

Everything I saw was art for dead people and gods. Ancient Egyptians lived on the east bank (where the sun rose) and buried each other on the west bank (where the sun died each evening). In about 1600 B.C. there was a big change in the style of tombs. Until then, kings were buried in pyramids. A string of about 70 of them are scattered along the Nile between the border of the Sudan and the Mediterranean--all on the west bank. But these pyramids were consistently being robbed, which meant kings were waking up in heaven with none of their favorite stuff. So, rather than mark their tombs with big pyramids, they started hiding their tombs in the folds of these valleys. 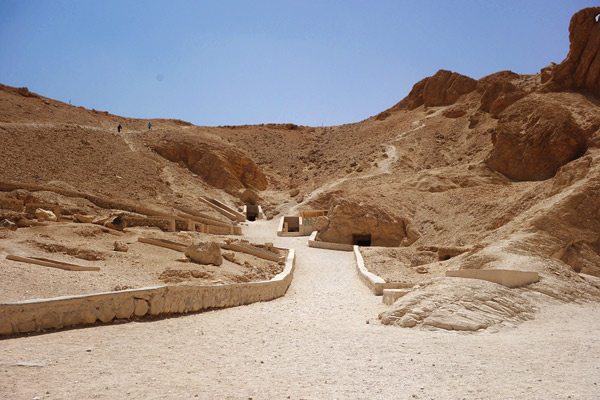 The Valley of Kings: Where pharaohs hide out while awaiting eternity.

This coincided with a new age when Egypt became an expansionist power. The money and labor saved by not building pyramids could literally populate and fund armies. The pharaohs (that's the Egyptian word for king) buried near Luxor were aggressive leaders who conquered and ruled an empire stretching from the Sudan to Syria. Of 63 tombs found so far in the Valley of the Kings, only two were found intact. Most were plundered in ancient Egyptian times and then buried and forgotten for centuries until our age. Archeologists expect there are about a hundred tombs still awaiting discovery--and likely just a handful will be found intact. 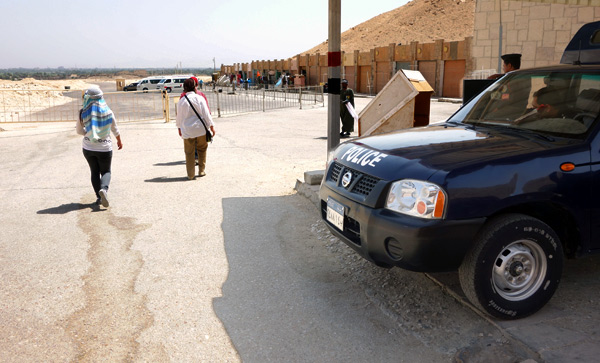 Sights generally mobbed by tour buses are empty in 2013. Ever since a horrible massacre of tourists by terrorists at Luxor back in the 1990s, police have been stationed at every ancient sight.

It's all about gaining eternal life. Eternity required an intact body and food for the soul's journey. The body was mummified and hidden in the Valley of the Kings. While commoners' tombs were simply gravel pits--traces of which you can see today--the fabulously rich and powerful kings had elaborate tombs. They were dug with long underground ramps elaborately painted, leading down to big tomb chambers deep in the mountain. The biggest fears were that a jackal would dig up and eat your body or that grave robbers would loot your stash before you made it to heaven. My guide explained, "When you fear something, you worship it. So the god Anubis is portrayed as a jackal. He's the god of embalmers, guardian of tombs." 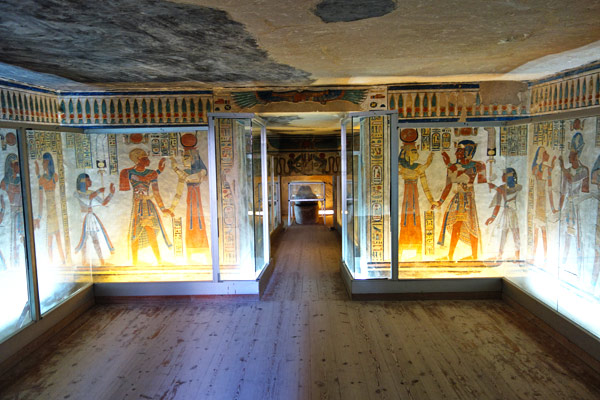 Tombs with their colorful paintings, hidden in the dark and dry desert of Egypt for over 3,000 years, are remarkably well-preserved.

The soul needed nourishment to make it to the goal line of salvation. Because the body was effectively hidden in the valley--and therefore couldn't be fed, each major tomb would have a correlating mortuary temple nearby, in full view between the hidden tombs and the Nile. This is where offerings of food were brought to the dead. While the most famous mortuary temple was that of Queen Hatshepsut, I found the much less famous mortuary temple of Ramses III, called Medinet Habu, far more visual and better for TV. 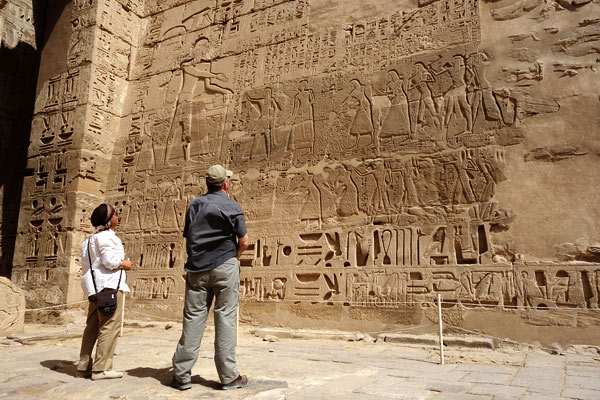 With a guide to explain the symbolism--in this case, how great Ramses III was--you learn how meaningful every inch of this carved surface is. Photo by Trish Feaster (for her Egypt blog, see http://thetravelphile.com/).

There's a separate valley for kings, queens, and nobles. We toured tombs in each. One of my favorites was the Tomb of Ramses IV for its original colors and cosmic ceiling over the burial chamber. A portrait of the dead king greets the sun-god at the top of the ramp. There's a great shot looking down the ramp to the tomb chamber with its huge granite sarcophagus (the stone was quarried in distant Aswan). Another favorite was the Tomb of Ramses III. Judging by the glamorous attire on the figures painted on the walls of his tomb, Ramses III was more of a fashionista. But the walls are all covered with glass, which will be tough to film. The very best paintings I saw were in the Tomb of Amenherkhepshef, a son of Ramses III. 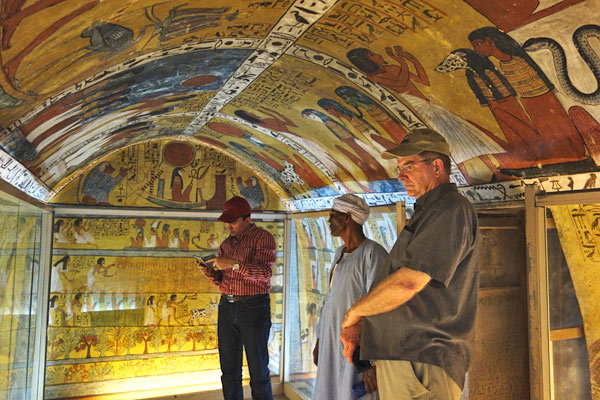 The foreman of the workers who decorated the pharaoh's tomb got a cool perk--a very colorful tomb of his own. Photo by Trish Feaster (for her Egypt blog, see http://thetravelphile.com/).