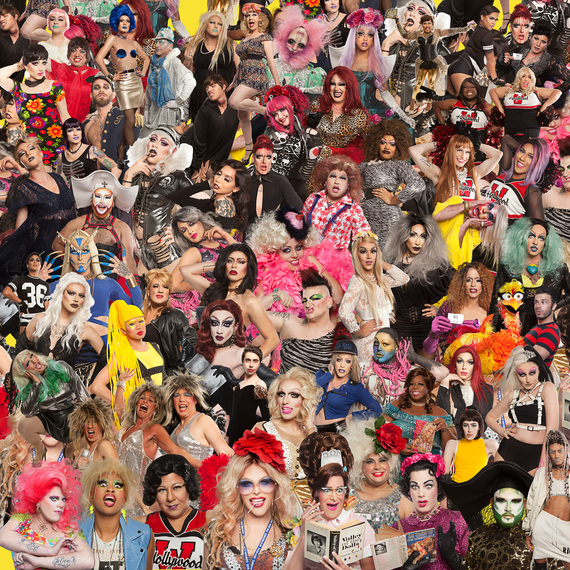 Austin Young: Portrait of Anyone Who Shows Up in Drag (2016)

There is so much happening right now under both the #WeHoArts and #WeHoPride banners that attempting a concise overview is a folly. Between a Pride Month that lasts 40 days, a robust and eclectic public art program that includes everything from outdoor sculptures to concerts, exhibitions, lectures, and a brand new mural-festooned civic plaza, forget a rainbow -- it's a kaleidoscope.

A bastion of progressive social policy in the fight for equality, West Hollywood can also be exceptionally proud of its equally progressive history in arts and culture -- not only welcoming but investing significant resources into innovative and often daring public art programs at a level most American cities fail to do. LA as a whole has embraced its new status as a cultural capital and embraced the potential of a community-strengthening arts-based economy -- but West Hollywood has been out in front of this idea for decades. 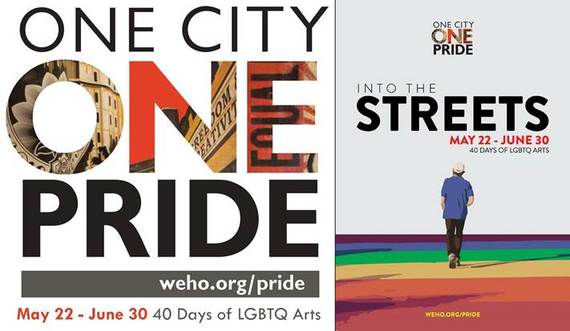 And the intertwined histories of political and cultural progressivism are now even more confluent than ever, as the City of West Hollywood's One City One Pride LGBTQ Arts Festival, offers more than 90 interactive, performing, visual arts, and educational events over 40 days, May 22 - June 30 -- coinciding with the release of the city's new cultural platform, known simply as The Plan, as well as an expanding art program that includes social practice artists and several new public buildings and urban land art. Also starting in June, the Social Practice Artist team of Alyse Emdur and Rosten Woo were selected for the City's new community-focused cultural planning process "WeHo Arts: The Plan" from June 2016 to January 2017. They even have a city poet. 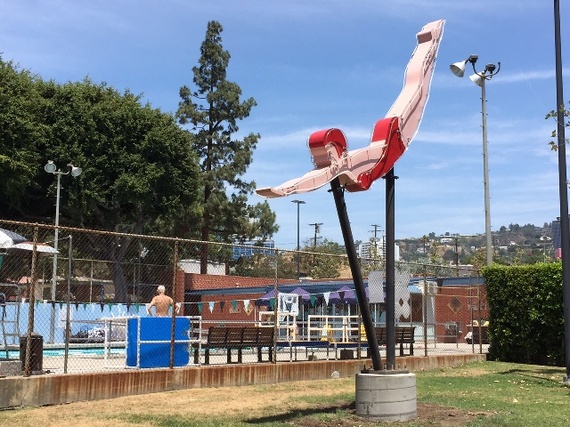 As alluded to above, a concise or even a comprehensive overview is all but impossible. But what follows are some especially dynamic highlights culled from the compendium, with all the helpful links to the full monty -- which you can to peruse on your own before choosing your own adventure.

The City Hall Community Plaza and Automated Garage with Site-Specific Artworks open this month. The garage is the first municipal project of its kind on the west coast, and features original art like an installation by Ned Kahn, murals in the bays of the garage by Art of Chase, MONCHO1929, Bronwyn Lundberg, and Kim West; and a collaborative banner by MONCHO1929 and West Hollywood City Poet Steven Reigns. The Community Plaza will be used for community events, concerts, and etc. 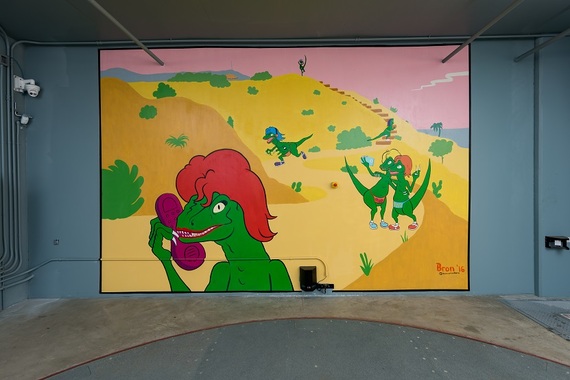 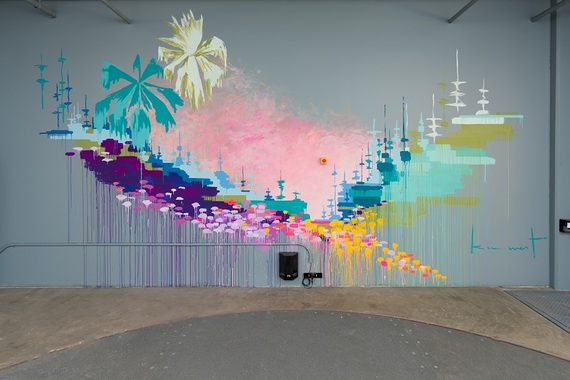 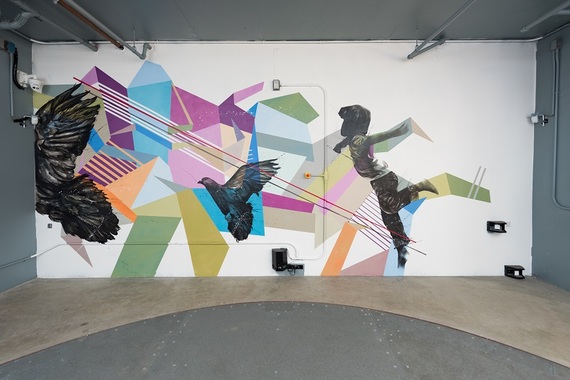 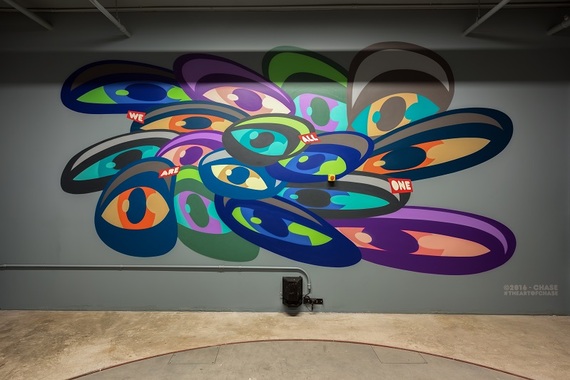 The Art of Chase: We Are All One. Photo by Jon Viscott

The West Hollywood Library currently has two exhibitions, both on view through June 27. The powerful "Women Manifest: At the Core" curated by photographer Brooke Mason, and the exuberant "A Brief History Of Drag" curated by artist Austin Young who also photographed the show's masterpiece, the largest group drag portrait ever made. A sculpture by Mr. Brainwash, and exterior murals by Shepard Fairey and Kenny Scharf also all remain on extended view. 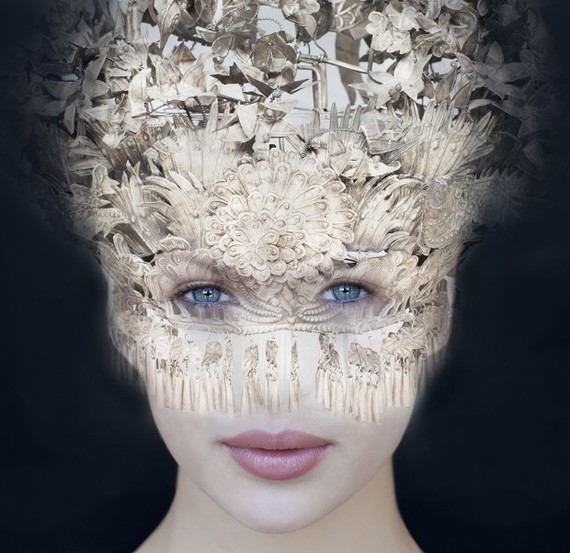 Micky Hoogendijke: Regal Blond. From the "Women Manifest: At the Core" exhibition.

The adjacent West Hollywood Park continues its revolving Art on the Outside public sculpture program, with both Yi Hwan Kwon's "Bus Stop" and The Virginia Court Motel Diver currently installed. 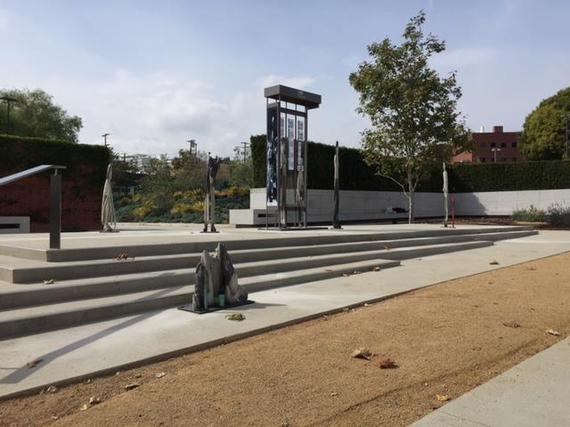 
Plummer Park's Long Hall is currently showing "C**k, Paper, Scissors" through July 10 -- presented by ONE Archives and featuring works by an intergenerational group of fifteen artists who explore the collaged page with diverse, erotically inclined tactics. The exhibition draws from both archival collections and contemporary practices, focusing on how these artists reuse print culture for world-making projects ranging from the era of gay liberation to the present. 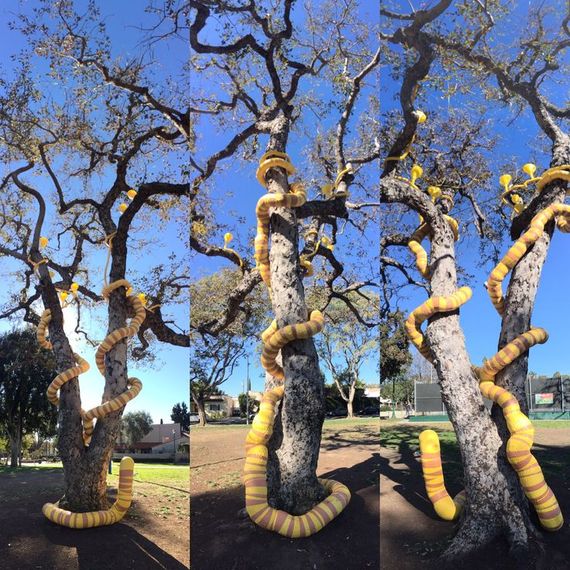 Tim Murdoch: And the Tree Was Happy (installation views).

There are also two works currently installed in Plummer Park as part of the CAN YOU DIG IT? - Art on the Outside land art initiative. "And The Tree Was Happy by Tim Murdoch and "Aqueous Skin" by Miki Iwasaki. "Food-Prints" by Brett Snyder, Edward Morris, and Sussanah Sayler will be installed in July. 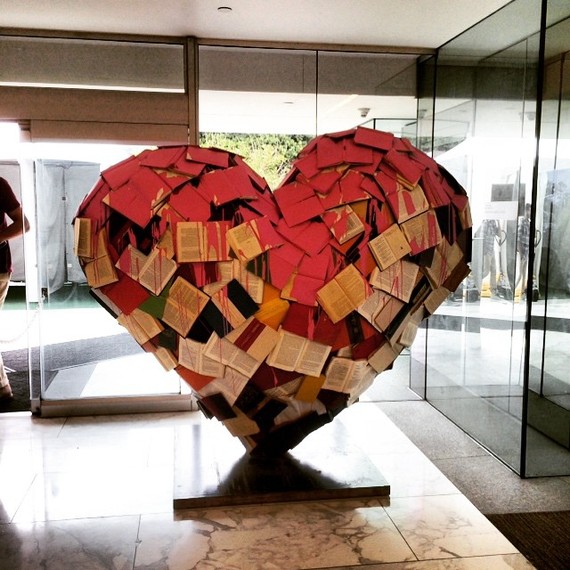 June 10-12. The City of West Hollywood is also the setting for the LA Pride Festival and parade, taking place on June 10-12, and produced by Christopher Street West.

And finally, as part of its poet laureate program, the City of West Hollywood is currently accepting nominations from qualified applicants for its next City Poet. The poet selected for this distinction will hold the position from October 2016 - October 2018, following a two-year term served by inaugural City of West Hollywood City Poet Steven Reigns. The City Poet serves as the official ambassador of West Hollywood's vibrant literary culture, leading the promotion of poetry in the city, including the annual celebration of National Poetry Month. Interested poets are asked to self-nominate by Thursday, July 14.