Rosemary Bilchak and her husband, Gordon MacAlpine, were eating on their porch when they heard the engine of the pesticide fogger rev up next door.

They grabbed their food, went inside and closed the windows. "I was smart enough to grab my camera, too," said Bilchak.

As evidenced by her photos, the tiny droplets of pesticide that neighbor Jim Hopper was spraying on his Hotchkiss, Colo., yard -- out of the back of a pickup truck -- had drifted onto their property. This was not what the doctor had ordered: MacAlpine, who suffers from leukemia, was told by his oncologist to avoid exposure to pesticides.

"The fog was thick enough to obliterate a house just on the other side," Bilchak said of the incident in July 2010. 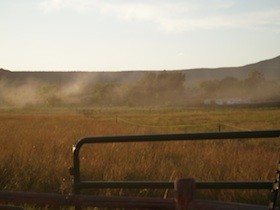 Shortly after retreating indoors, Bilchak and MacAlpine said they began having trouble breathing and felt what she described as a "clenching" in the chest. They spent the night at a friend's house.

Hopper, a retired farmer, said that he too was acting on behalf of his family's health. He had targeted the spray at mosquitoes he believed may be carrying the West Nile virus. His elderly wife, Georgia, had contracted the disease in 2006, spent days in intensive care and still felt lingering effects. The frightening event sparked Hopper to act.

"My only purpose is to protect my family," he told his local television news. "We have grandkids here, we are raising an autistic granddaughter."

His granddaughter is also sensitive to light and prefers to be outside during the evening, when West Nile-carrying mosquitoes are most active.

The Delta County District Court judge ruled on July 5 that an environmental contaminant could, in fact, be considered a form of trespass. More specifically, the decision states that Hopper can still use pesticides in his yard, but cannot spray within 150 feet of his neighbor's property or when winds could cause the mist to drift in his neighbor's direction. Since the initial incident, Hopper has become licensed to spray the pesticide and has installed a wind sock and flag to gauge wind direction. He has also agreed to send written notices to his neighbors before firing up his fogger.

"This is an extraordinary combination of competing interests," said Paul Jepson, professor and director of the Integrated Plant Protection Center at Oregon State University, after reviewing last week's judgement over the lawsuit filed by Bilchak and MacAlpine.

Hopper's fogger spits out very tiny droplets of an organophosphate insecticide, malathion, which some studies have shown can disrupt hormones, trigger asthma and cause cancer in humans. 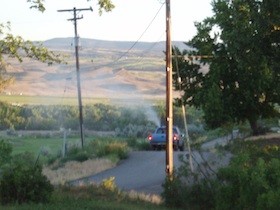 Hopper sprays pesticides out the back of his pickup truck.

The ultra-fine mister is designed to keep the particles suspended in the air, in order to increase the chances that flying mosquitoes make direct contact with the poison, explained Jepson. If the conditions aren't perfect, said Jepson, this so-called adulticiding can have "zero efficacy."

In his ruling, the district court judge noted that the strategy had actually failed to protect Hopper’s wife in 2006. "Ms. Hopper contracted West Nile virus when the Paonia Mosquito District was regularly spraying the Hopper property with an adulticide."

The airborne pesticide droplets are liable to drift. Under certain wind conditions, they can be carried as far as 1000 feet, according to the court decision.

Jepson said he is concerned that too much emphasis is put on high winds, when "zero wind can be just as much of a problem."

High temperatures and still inversion layers can also cause pesticides to drift great distances -- well beyond the 150-foot buffer ordered by the court. Jepson said a light breeze and cool temperatures are ideal for spraying.

Whatever weather conditions prevailed on that summer day in 2010, sampling conducted by the Colorado Department of Agriculture a couple days later found residual pesticides on Bilchak and MacAlpine's organic garden as well as on the far side of their house.

"We had more pesticide on our property than he did on his," said Bilchak.

West Nile, transmitted through the bite of a mosquito, usually triggers only mild flu-like symptoms. On rare occasions, it can prove deadly.

"It could be particularly deadly to those with compromised immune systems like my husband," Bilchak added. "And we're farmers, out there in the field where mosquitoes could be."

Instead of enlisting chemicals, the couple follows several steps to reduce their own risk of mosquito bites, including draining standing water, using a bacteria that kills mosquito larvae and wearing long-sleeved shirts and pants when outdoors.

“The best thing to do in this given unique circumstance would be for the neighbors to cooperate on integrating different pest management methods,” said Jepson. “Instead, we’ve got this toxic solution that impinges on one neighbor’s health and makes the other neighbor feel good because he thinks he’s doing something.”