MOSCOW -- Although it will take time to truly evaluate the consequences of the Nov. 13 massacre in Paris for the French, European and world politics, some conclusions can be made now.

The attacks will almost inevitably lead to an escalation of war in Iraq and Syria, as well as to changes in the balance of forces in the Middle East as a whole. The French government has been challenged with such audacity that it does not have the right not to respond; Paris has found itself in the same position as Washington after the September 11, 2001 attacks. The millions marching for solidarity in January after the killings at the office of the Charlie Hebdo magazine might have mimicked national mobilization, but the government this time also cannot avoid launching a major retribution. It might include more intensive attacks on the Islamic State in Iraq and Syria, and a clearer and more coordinated allied strategy will certainly replace the rather haphazard attacks.

It is time the U.S., despite Obama's reluctance to get drawn into any military action, showed proper leadership and the ability to provide effective and strong support to its allies.

Since France is unlikely to rally enough capabilities, even with the help of major European countries, for an effective response, Europe is likely to appeal to the United States, which has so far preferred to distance itself from the Middle East developments -- or, more precisely, minimized its involvement or limited it to anti-ISIS rhetoric.

It is now time the United States, despite President Obama's reluctance to get drawn into any military action, showed proper leadership and the ability to provide effective and strong support to its allies. It is essential for its own sake, if not so much for relations with Europe -- perhaps, primarily for maintaining its reputation in Asia, where it is gradually creating a pattern of competition with China -- but also to confirm its own capabilities and reliability to its partners in the region.

Alignment of Force in Mideast Could Change

The alignment of forces in the Middle East may change. The Gulf monarchies actually seem to believe that Iran's expansion and stronger foothold are more dangerous than the success of the self-proclaimed Islamic State. Until recently, the Syrian conflict largely revolved around the fate of Bashar al-Assad, which meant that his opponents were fixated on regime change in Syria, giving it priority above anything else. At a time when leading Western countries start seeing ISIS as an even more dangerous threat, Saudi Arabia and its allies might be growing increasingly at odds with this belief.

Clearly a new round of the "big game" in the Middle East is inevitable, and if France tried to avoid it, the country would simply lose its reputation in that critical part of the world, probably along with Europe losing its influence there altogether.

As for Europe, it is likely to do a U-turn in its attitude to the refugees and further strengthen its commitment to a police-dominated handling of migration issues; a rise of right-wing sentiment can be expected there. 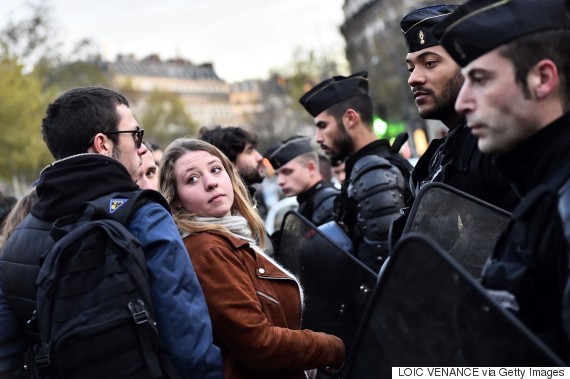 French gendarmes stand guard as dozens of people gather for a demonstration in support of migrants in Paris amid a ban on public gatherings. LOIC VENANCE/AFP/Getty Images.

It so happened that I left Paris on the afternoon of Nov. 13, after asking everyone there on the previous day at informal meetings the same question I had been asking them over the last three years -- whether Marine Le Pen could become president. Until then, the answer was always no, no matter how high her popularity. The pragmatic French were unlikely to support her at the elections. This was the first time I heard: "Yes, it is possible." The carnage unleashed the next day will most likely increase this possibility.

The focus of migration policy will now shift to concern about a significant number of active or latent Islamists potentially present in the current flow of refugees wishing to move to Europe -- a concern voiced even at the beginning of their flight. Until now, that concern was pushed to the sidelines of public debate and mainly interested the security services. Now the public sentiment can change appreciably. Germany will have to change its approach most dramatically after Chancellor Angela Merkel proclaimed an open-door policy back in the late summer and early fall. The country gradually began shifting away from it several weeks ago, but the Paris tragedy will certainly speed up the revision of this view dramatically. Even if far-right parties do not see a qualitative rise in popularity in leading European countries, mainstream politicians will have to adopt a large part of their slogans to retain the loyalty of terrified voters.

In general, we can say that, firstly, Europe continues to be faced with signs of a systemic crisis of their institutional and political model, and the need for transformation has become ever more obvious. Secondly, the largely familiar concept of "European security" in the OSCE's interpretation is becoming completely meaningless. European security is now inseparable from the crumbling Middle East developments, something that poses problems and dictates actions, something almost impossible to control.

For Russia, it may mean that its operation in Syria, if not a new model to follow, will make much more sense to many in the West. Its impact on the political and diplomatic process around Syria is difficult to predict, but if the United States, France and other participants try to step up the fighting, Russia's logic of choosing a partner on land and joining the fight against their enemies begins to make more sense as well. Until recently, strikes by the Washington-led coalition were not intended to dramatically change the situation in the theater of war, but were rather intended to assert its presence. If they decide to deal a crushing blow to ISIS, they would need to reduce the pressure on Assad, actually acknowledging the fact that the coalition is fighting on his side. Moreover, they would need to involve the "moderate opposition." How this can be done given the resistance of the hardline anti-Assad countries in the region such as Saudi Arabia and Turkey is difficult to say, but the pressure on them will grow. Among Western countries, France is most implacable in its resentment of Assad, but some changes are possible now.

Moscow, at least, has the right to tell the rest of its partners in the Syrian process that the events have confirmed that its priorities are correct.

Moscow, at least, has the right to tell the rest of its partners in the Syrian process that the events have confirmed that its priorities are correct. Being the most capable foreign military force in the region, Russia is also quite able to convert that capacity into political influence. Ukraine, until now a major irritant in relations between Russia and Europe/the West, is gradually taking a backseat.

The Paris events will further tighten the Middle East knot, but an attempt to sever it in one powerful stroke, like the one the United States made in 2001 after 9/11, is likely to have the same "success" as that one. The masterminds of the Paris attacks will be rubbing their hands, as bin Laden once was, watching the stone they threw cause an uncontrollable avalanche.