The Westboro Baptist Church is heading out on a "God Hates the Media Tour," with plans to picket pretty much every major technology company in Silicon Valley.

ValleyWag noted WBC's announcement on Wednesday. The quasi-religious group, known for its vitriolic anti-gay rhetoric and picketing of funerals, will kick off its latest crusade on Aug. 12. Facebook, Google and Apple headquarters are just a few of the sites on the docket.

From a July 25 press release about the stunt:

God hates the media; in all its forms. God did not set these social media networks in place to facilitate perverts pursuing their divers filth; nor do they exist for paedophile grooming, spreading sodomite agenda, other wicked political propaganda or propagating mountains of false doctrine. On the contrary, all these media platforms have one purpose; to spread the gospel far and wide. Though you labour in vain to demonize and stop the words we speak; you only succeed causing more people to see, hear and be convicted [all sic].

The WBC's rationale behind the slew of tech protests is muddled.

In a release about the Apple picket, the group calls the company's late co-founder, Steve Jobs, "a rich, proud fool who now inhabits hell." The group is also protesting YouTube, because the site "has a long history of removing videos and comments that are biblically accurate."

Even Reddit is a target of the Aug. 12 event, because the site's late co-founder, Aaron Swartz, was "a poster boy for this online community: a fag, an atheist and a thief."

Before the tour begins, however, WBC will host a Reddit AMA on Aug. 10. We're expecting a level-headed and informative exchange of ideas.

See the full press release below. 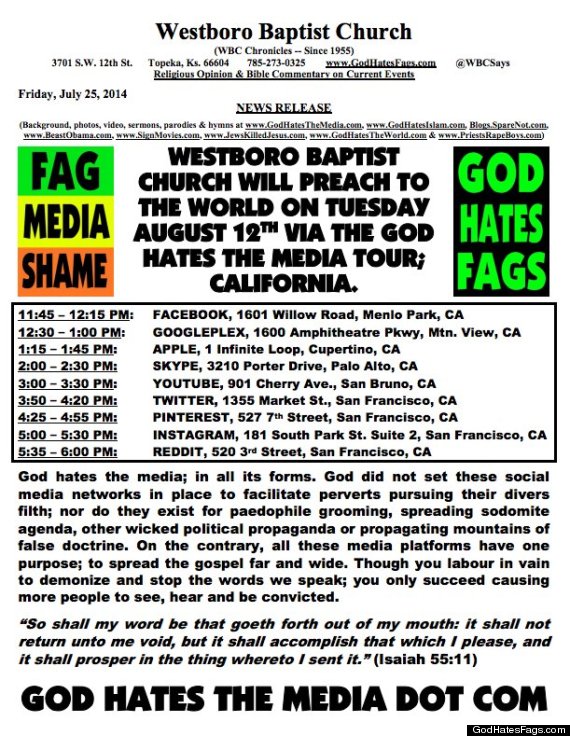