I must admit that at first I was concerned when I heard that members of Westboro Baptist Church were planning on protesting at my daughter's high school, Rockville High School, in the Washington, DC suburbs.

Since the early 1990s, this radical fringe church from Topeka, Kansas has engaged in protests across the country, usually showing up with a few members and carrying signs claiming that Barack Obama is the anti-Christ, and that God hates gays, soldiers, and even nerds.

The Southern Poverty Law Center claims that the church is "arguably the most obnoxious and rabid hate group in America."

They have particularly focused on protesting at military funerals, claiming soldier deaths are the result of the country's acceptance of gays. Of course, media attention, often stimulated by counter-protests, are what they crave, and it is at times difficult for a community, particularly one that is diverse and aspires to social justice and human rights, to sit idly by while they spew hate.

The principal urged an approach that is increasingly used with the church: ignore them. Students (and parents) were asked to proceed as if it were a normal school day. However, inside the school students were encouraged to wear school colors - orange and black - and treat the day as a "unity day." A large sheet of paper was placed in a hallway where students could pledge to "Agree to be Tolerant." The greater community was divided with some groups following her suggestion and sitting out the day, while others pressing for a counter-protest. 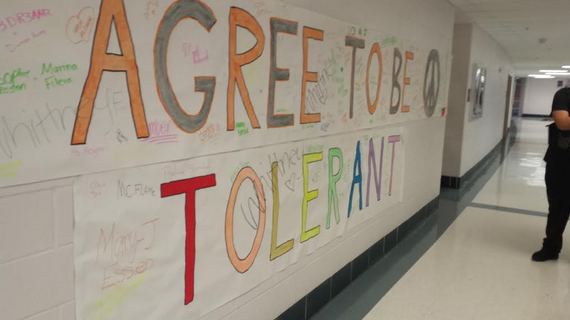 As both a parent and peacebuilding educator, I felt torn. I certainly did not want my daughter to believe that her community (and parents) would take no action in response to the church's presence. No parent wants his or her child to be exposed to contemptible hatred. But as an educator, I recognized that the Westboro Baptist Church visit was an opportunity to consider our community values and principles, engage students in topics that are often neglected in education, and have them understand the value of protest and other forms of nonviolent action. I offered to work with students that day and examine peacebuilding and social justice issues.

I live in an environment where the benefits of diversity are ubiquitous and often taken for granted. My city, Rockville, Maryland, where I sit on the human rights commission, is composed of Asians, Africans, Latinos, blacks and whites. My neighbors are from Cameroon, Tibet (by way of India), and a number of Central and South American countries, the most predominate of which is El Salvador. And our city is reflective of much of the region: a multitude of languages, variety of cultures, and many countries of origin. It is a place where my wife and I purposely wanted to raise our children, where they have come to recognize no boundaries or restrictions when it comes to social interaction.

But with that said, at times I feel that we live in a bubble. What America looks like in my community - tolerant, progressive, diverse - is not America to many others. There are parts of this country where race relations are troubled, gays and lesbians are outcasts, and immigrants are blamed for much of the ills of the world. In some places, depictions of hate, as offered by the Westboro Baptist Church, are not out of the ordinary. Controversies surrounding flying the Confederate flag in places like South Carolina and Mississippi are not issues we deal with, normally. Though to be honest, our city has recently wrestled with what to do with a monument that depicts a Confederate soldier, though most recognize that the statue is inappropriate in our community.

The students at my daughter's high school are seldom exposed to extremism and hatred. Communities where deep-seated hatred is the norm might be rarer today then in the past, but images that depict bigotry provide us with a chance to show young people that the work of social justice doesn't stop with our own community. They need to recognize the motives and approaches of those who would promote fear and intolerance, and more importantly, they need to develop resilience, perspective, and strategies for engagement with communities that aspire to antisocial values. Though as a parent, I didn't wish my daughter to witness what Westboro Baptist Church advocates, I do want her to recognize hatred when she sees it, understand the value of protest and nonviolent civil action, and be sensitive to the needs of those who are oppressed.

My offer was accepted and I spent the day at my daughter's school talking about social justice and peacebuilding. We explored the value of protest and how it can be used to promote issues that even tolerant communities such as ours need to raise. I had students create their own protest signs. I hoped that all students at her school would continue to explore social justice needs and engage in conversations with their friends and, in particular, with their parents and family. Often growing up, my kids would be asked to share about their day, and it frequently was a conversation that centered on too much homework and frivolous events of the day. After today's visit, I would hope that the evening's dinner conversations were ones that would focus on standing up for what is right, recognizing hatred and bigotry, and strategies to advance human rights and social justice.

And to Westboro Baptist Church, I would say, come back at any time. There is always more we can teach our youth.