NEW YORK -- Four members of the Westboro Baptist Church stopped in front of The Huffington Post's Greenwich Village offices Wednesday afternoon for a brief protest as part of their "God Hates The Media Tour." While the usual chants of "God hates fags" -- as well as signs thanking God for 9/11 -- drew both appalled and amused shouts from the dozens of counterprotesters, Rebekah Phelps-Roper, the 27-year-old granddaughter of church founder Fred Phelps, deviated briefly from the standard line.

Swaying a little to the sounds of singing led by her mother Shirley, a longtime prominent member of the church, Phelps-Roper said that she follows HuffPost Gay Voices on Twitter -- "so I can say," she told HuffPost, the Gay Voices site is "a bunch of crap."

"This is what the Bible says," Phelps-Roper added, referring to her church's uncompromising message.

But Phelps-Roper only had kind words for Huffington Post Gay Voices editor Noah Michelson, whom she declared to be her "best friend."

"I bought him a shirt, actually, in case he wanted one. Do you think he's a small?"

Rummaging in a drawstring bag decorated with skulls, she drew out a black shirt with bold white lettering: GOD HATES THE MEDIA DOTCOM. 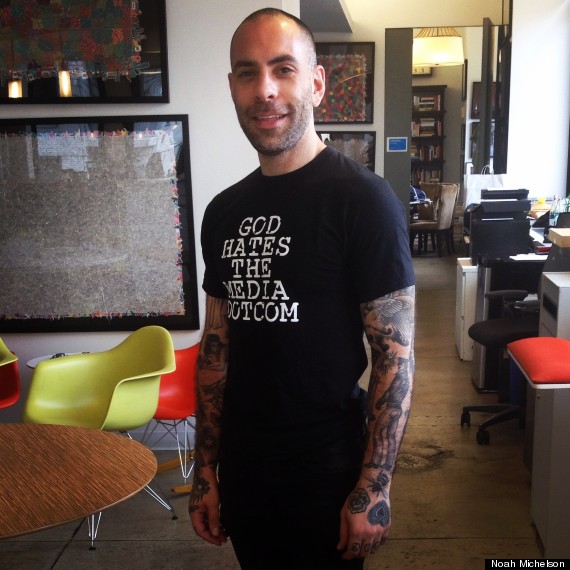 Above, HuffPost Gay Voices Executive Editor Noah Michelson wearing the t-shirt he was given by Westboro

"I love it every time Huffington Post talks about the Westboro Baptist Church," she said.

Concluding the interview, she smiled and said "Happy birthday," for reasons that were unclear.

Across the street, in a sea of drag queens and Huffington Post staffers decked out in rainbow gear, Michelson was delighted to receive the shirt. As the four church members walked away down Broadway toward a white van, Michelson ran through the crowd to thank Phelps-Roper.

Her face lit up when she saw Michelson, and she offered her fist for a bump.

"Be safe," Michelson called after her.

"Westboro and I have a very love-hate relationship. I hate what they stand for, but I also appreciate how much pro-queer sentiment they inadvertently end up inspiring," Michelson said. "Occasionally, I catch glimpses of their humanity and it makes me hopeful. Maybe Rebekah will be the next Phelps child to leave the cult?"