Westboro Baptist Church, the radical Kansas group famously responsible for protests at the funerals of gay rights supporters and innocent children alike, is at it again. On Monday the group released a memo detailing plans to picket the funeral of "Jackass" star Ryan Dunn.

In the news release, titled "Ryan Dunn is in hell!" Westboro calls for the picket due to "vulgar stunts" and involvement in MTV's popular "Jackass" franchise, the fans of which Westboro names a "perverse generation." The tweets and sentiments of Dunn's family and friends are also called out in the memo. "You should have told him the truth about God," the group warns.

34-year-old Dunn passed away on Monday when the car he was driving was involved in an accident thought due to speeding, also killing passenger Zachary Hartwell. A private service for family and friends will be held near Dunn's home in West Chester, Pennsylvania, with a public memorial service to follow. 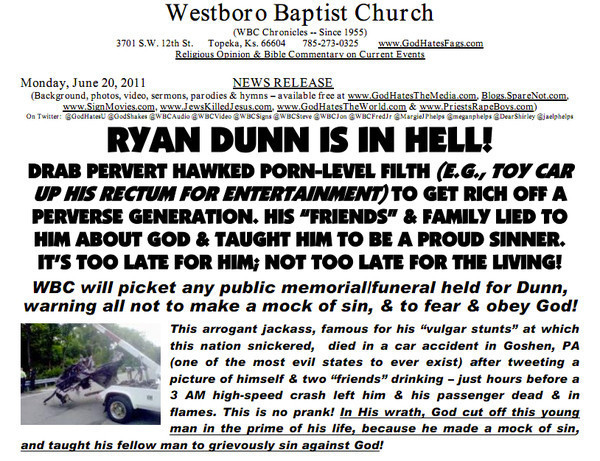