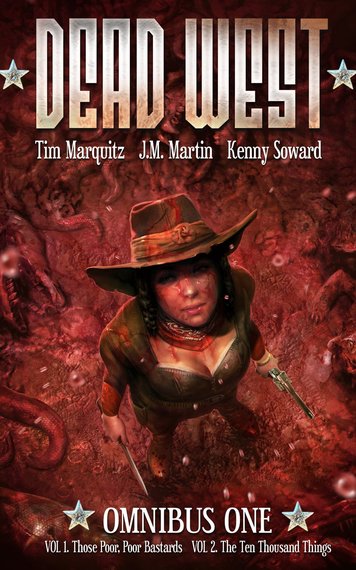 I grew up in an underground house, about the size of a good parking spot on Black Friday. My window-less bedroom backed the television corner, and -- given my father's favored genre -- that meant baptism by Westerns. I cut my teeth on John Wayne and Clint Eastwood, the constant stream of true grit filtering through the slats of my folding door. I went west, myself, by fifteen on a road trip of painted desert, roadside silver stands, and ten-gallon wannabes. I returned with cowboy boots and a leather hat, but also a sorrowful sort of feeling that the west I'd expected didn't exist anymore. Over the years, I abandoned that genre for others both in writing and in reading. But like dry seeds waiting for water, those early proclivities remained.

Turns out, heavy clouds were on the horizon after all. This past fall, I went to the World Fantasy Convention to give a reading and to hear from some of my favorite authors. While there, I discovered Ragnarok Publications and a surprising omnibus volume called Dead West. Collecting two short novels, Those Poor, Poor Bastards and Ten Thousand Things, Dead West follows the exploits of Nina Weaver through a dismal, hellish landscape that, despite the rancid undead, looks a lot like the wild west of the mid-nineteenth century.

Undead, you say? This isn't your typical zombie drama (a sentence I never thought I'd see in print, much less contribute). Zombies may not exactly be passe', but we have witnessed a lot of their creeping, crawling trauma over the past few years. Even so, the desperate creatures faced by Nina, her father, and a band of misfit survivors offer something surprisingly new.

The frontier has always been a place of magical realism -- even at it's most gritty. Pale Rider, the 1985 Eastwood film about a strange preacher arriving in a besieged town, offers up a kind of near-mythic battle of good and evil. The Good, the Bad, and the Ugly tantalizes us with unmarked graves and its haunting, whistled refrain. Who among us can doubt the nearly supernatural quality of heroes in white hats as they battle dark forces? Dead West offers all of this, but with a tilted axis that allows the worst of our human fears to take form, from demonically controlled undead to satanic steam engines and faith-based magic. And through it all, we have a brilliant heroine, a girl on the cusp of womanhood who would do True Grit's Mattie Ross proud. (And then some).

Along the way, readers are greeted with dialogue in dialect and descriptions that make the heart shiver. Nothing so visceral as watching two horses collide with the "heavy thud of meat against meat" in a scene that opens book one in a train-wreck of action that doesn't slow even as it sheds spent cartridges and dead men. In other words, it's a western, folks. A western with an expanded territory of horrors to face and characters with the charm of Angel Eyes, the curled-lip, single-minded purpose of "Blondie," and a side of nihilism a la High Plains Drifter. From the brilliant (clearly tortured?) minds of Tim Marquitz, J.M. Martin, and Kenny Soward, Dead West offers something in the way of western "expansion."

I might not be a huge fan of zombies, and true, some of the breathless disasters left me wanting reflection (probably over a sunset plain, with the herald of eerie soundtrack) -- a pause from which to survey the damages before moving on. In a way, of course, that isn't necessarily criticism; this is a novel duo eminently worth reading for western and sci-fi fans alike. I've not come across anything quite like it before -- and I hope there are more to come. I'll just go dust off my hat... I'm sure those spurs are here somewhere...