Australia-based photographer Serena Hodson loves taking pictures of animals, because "they have no hang-ups. They don’t put on an act, they don’t complain about an unflattering photo and most of all, they make me happy."

Indeed, the dogs in Hodson's latest photo series aren't hiding their feelings, not one whit. Those feelings they're showing aren't always so cheerful, either. 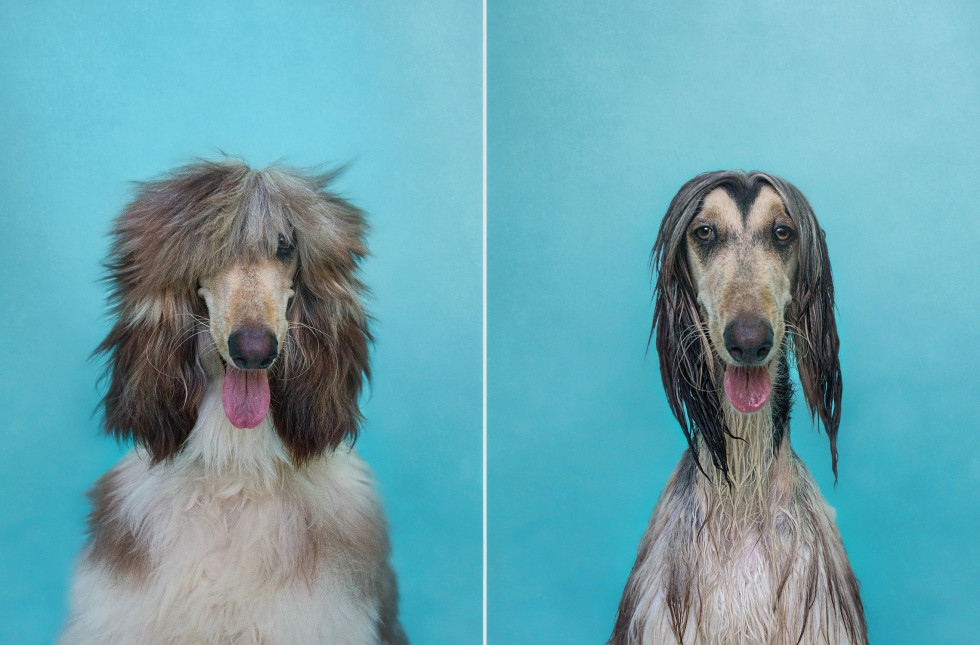 Casper is an Afghan hound whose hair and attitude is better than ours, at least when he's dry. Photo credit: Serena Hodson

The idea came about while Hodson was washing her own dogs -- a British bulldog named Simon and a French bulldog named Garfunkel -- and noticed how being wet brought out different sides of their personalities.

Hodson had become interested in how portraiture could capture the story of how an animal's personality changes in various circumstances. She was also fascinated by show dogs.

"The posing and prancing, the search for perfection. So, I wanted to combine all of these pieces of inspiration together and see if there was an idea in it," she says.

Hodson is aware that comparisons are being drawn between Dry Dog Wet Dog, and the work of New York-based photographer Sophie Gamand, whose own "Wet Dog" series won the Portraiture category of the 2014 Sony World Photography Awards.

"If I had to make sure my subjects hadn’t ever been captured by another photographer, I’d never pick up the camera," Hodson says. "The same applies to any creative pursuit."

What pleased the New Zealand-born photographer more was hearing from a friend who said that the pictures had captured the show dogs' vulnerability -- which made Hodson's friend, in turn, think about her own vulnerability. How she, too, hated to be seen with wet hair; how it made her feel exposed.

"I think any time humans can identify with an animal’s personality it creates compassion and respect," Hodson says, "which is always a positive thing."

And in case you're concerned about the dogs: don't worry -- even their dampest moods don't last long.

"The dogs that look the grumpiest to me -- Henri the dachshund and Garfunkel the French bulldog -- are the dogs I know very well. And I know they don’t hold a grudge when treats are involved," says Hodson.