An international group of astrophysicists made a rare find; they discovered a huge cluster of colliding galaxies sheltering a core bursting with new stars. 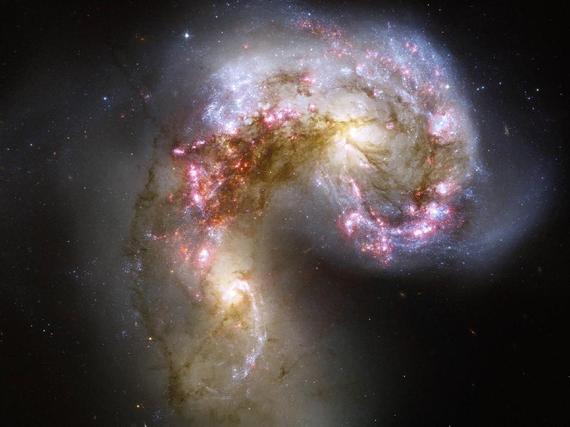 Figure A. The Antennae galaxies are a classic example of two colliding spiral galaxies where the merger of gas clouds have driven incredibly increased star formation (burgundy/red regions). Credit: NASA/ESA/HST.

In the observable universe, galaxies (the gravitational grouping of stars, dust, gas and dark matter) come in three main flavors: spirals, ellipticals and irregulars. Each flavor has its own distinguishing characteristic. Spirals, as the name suggests, have "arms" rich in stars, gas, and dust wrapping around a dense stellar core; they are still actively forming stars. Ellipticals are (semi)spherical in shape and have used up most of their gas and dust, resulting in an extremely low or no star formation at all. Irregulars are amorphous and contain great quantities of gas, dust and young stars.

Now, the latest galaxy surveys (SDSS, for example) say that 77 percent of the galaxies in the observable Universe are spirals, 20 percent are ellipticals and three percent are irregulars. Spirals, with their huge amounts of gas and dust, are believed to merge and create ellipticals. When the collision between two or more galaxies, with their respective gargantuan gas clouds, brings about new star formation the event is called a "wet merger" (and dry mergers are collisions that form no new stars).

Astronomers using the W. M. Keck telescope (University of California/Caltech) paired with observations by the Hubble, Herschel and Spitzer space telescopes, have carefully studied a cluster of merging galaxies ceremoniously known as SpARCS1049+56. The cluster is so massive that it holds the mass of 400 trillion suns and is composed of 27 individual galaxies. The Keck telescope helped astronomers determine the distance to the cluster, whose light took 9.8 billion light years to reach us. Dust obscures regions where stars are forming, thus looking in the infrared and sub-millimeter wavelengths with space telescopes allows us to peek into these stellar nurseries, where the surprise was waiting to be discovered. 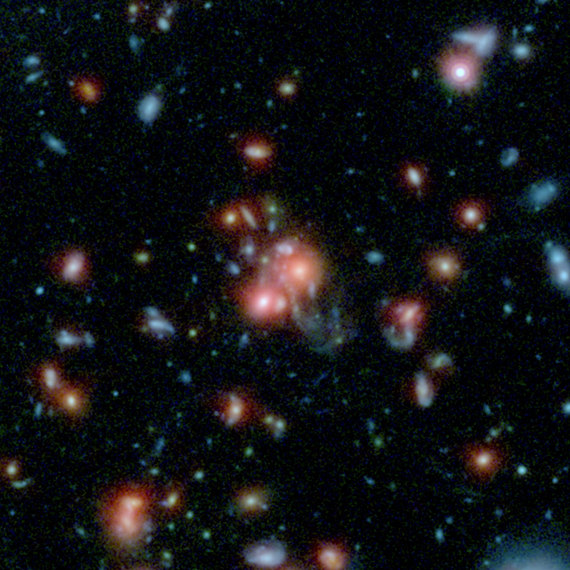 Figure B. Cluster of galaxies SpARCS1049 seen in a combined image from data by Hubble and Spitzer space telescopes. Credit: NASA, ESA and NASA/JPL-Caltech

"The Spitzer data showed us a truly enormous amount of star formation in the heart of this cluster, something that has rarely been seen before, and certainly not in a cluster this distant," commented co-author Adam Muzzin of the University of Cambridge, UK, to the Hubble site's science release.

"What is so unusual about this cluster is that it is forming stars at a prodigious rate, more than 800 solar masses per year," commented co-author Gillian Wilson from the University of California, Riverside. "To put that in perspective, our own galaxy, the Milky Way, is forming stars at the rate of only about one solar mass per year." Past studies have not found wet mergers that create stars at such an astonishing rate.

Astrophysicists are now planning on searching for these very massive wet mergers in other clusters of galaxies. Was "wetness" in the early Universe more common than today? 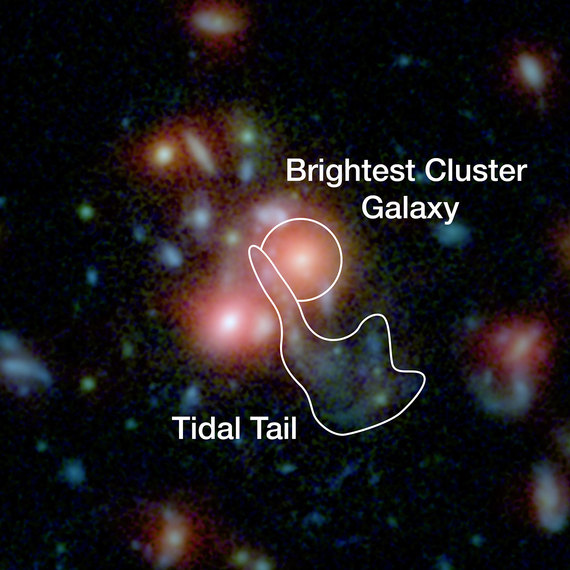 Figure C. Overlaying the image of cluster SpARCS1049 we can point at the center of the cluster undergoing a "wet" merger which is producing 800 times more stars than the Milky Way. The tidal tail -- an indicator of the merger -- as well as the brightest cluster galaxy itself are shown. Credit: NASA, ESA and NASA/JPL-Caltech

The science release from the Hubble Space Telescope can be found here.

The scientific paper can be downloaded here.